MANHATTAN, Kan. (DTN) -- Twenty-one Kansas witnesses made suggestions to Senate Agriculture Committee Chairman Pat Roberts, R-Kan., and ranking member Debbie Stabenow, D-Mich., on how to make changes to the farm bill to address much more difficult times than when the 2008 and 2014 farm bills were passed.

Most of the proposals involved relatively modest changes to the commodity and conservation programs, but a dairy industry witness noted that the Margin Protection Program is not working and suggested that dairy farmers should have access to another risk-management program as well.

Cherise Tieben, city manager of Dodge City, Kansas, said that Roberts' intervention for an upward adjustment to the population limit for USDA housing programs had allowed the city to get $9.9 million in loans for the construction of housing. That has allowed "the retention of existing businesses, the ability of existing businesses to grow and improves opportunities to recruit new business to our community."

At the end of the hearing, Roberts promised, as he has previously, that "there will be a next farm bill."

To the tough economic times, Roberts said, Congress must find a "solution within the budget and the trade rules."

At a press conference before the hearing, Roberts had said the biggest issues in agriculture are trade and President Donald Trump's uncertain trade agenda.

"Trade is on the minds of every farmer, every rancher and, I assure you, it is on the mind of Sen. Stabenow and myself," Roberts said.

"Trade is the biggest danger to the farm industry," Roberts said, adding that it is also the area that could "quickly turn things around" in the "rough patch" the farm economy is experiencing.

But with the Trans Pacific Partnership from which Trump withdrew "in the past" and no one sure what "operation" Trump wants to do on the North American Free Trade Agreement. Roberts said he has asked the White House and Trump's incoming trade officials to "announce, within weeks, months, if possible, the countries we are working with" so that members of his committee can be of help.

Roberts said that with so much uncertainty about Mexico, it is "no secret" that Mexico may buy its agricultural imports from countries other than the United States.

Roberts also said the Senate Agriculture Committee has not yet received the paperwork from the White House so it can schedule a confirmation hearing for Sonny Perdue, Trump's nominee for Agriculture secretary. "Sonny Perdue is just waiting." If the Senate were to hold a hearing on Perdue, he would win quick approval, Roberts added.

Committee aides have said the committee cannot schedule a hearing until it receives the paperwork. The White House is known to be looking at Perdue's business activities since he left the governorship in 2011. Politico has said repeatedly that nominees are becoming nervous that the White House is not providing them proper backing as the confirmation process proceeds.

Stabenow did not comment on these high-profile issues, but joined with Roberts in saying that she wanted to listen to the farmers before deciding what changes need to be made to farm policy. The farm bill provides rural America with an economic development policy that lasts five years and affects far more than farmers with its conservation and water and sewer and broadband programs.

Roberts repeated previous statements that he wants to finish the next farm bill before the current one expires on Sept. 30, 2018.

Roberts and Stabenow both noted that the current bill has saved more money than expected. Stabenow lamented that congressional budget procedures do not allow the committee to apply savings from the Supplemental Nutrition Assistance Program (SNAP) to farm programs. The SNAP savings have occurred because the economy has improved and the program is serving fewer people.

Roberts said he could not promise that there would be no cuts, but Congress will keep in mind there are problems in farm country and that the current bill has saved money.

"This blueprint is different because of the tough times we are facing right now," Roberts said, comparing the current atmosphere with 2014, when the last bill was written. 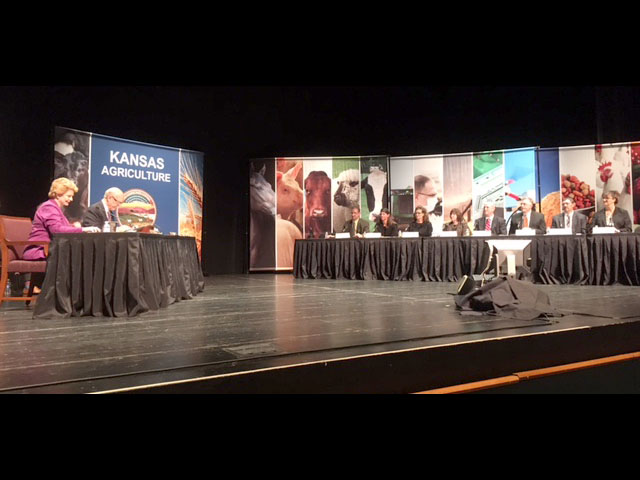