WASHINGTON (DTN) -- About two-thirds of a bipartisan group of around 50 lobbyists said this week they expect Congress not to finish the farm bill until 2019 and think that it will spend 10% below the current legislation.

The lobbyists had attended an event Wednesday dubbed "Bipartisan Opportunities for the 2018 Farm Bill and Beyond" sponsored by AGree, a foundation-sponsored organization whose motto is "transforming food and ag policy."

Members of a panel discussed issues on which AGree has worked in the past year. The attendees were asked questions at the end of the event and texted their answers.

The forum was just one of multiple efforts as groups pitch their ideas for the next farm bill. Leaders of the National Association of State Departments of Agriculture are also in Washington this week and released a list of priorities for the farm bill. NASDA listed seven major areas to seek "enhanced funding" that range from trade promotion to dealing with invasive species. See DTN's Ag Policy Blog http://dld.bz/…

The Senate Agriculture Committee has set its first farm-bill field hearing for Feb. 23 in Manhattan, Kansas. The current farm bill, however, doesn't expire until the end of the 2018 crop year, which is fall 2019.

Ferd Hoefner, a senior strategic adviser to the National Sustainable Agriculture Coalition, said at the AGree forum that he expects battles over payment limitations, who should be considered "actively engaged" in farming, adjusted gross income tests and caps on crop insurance subsidies and elimination of the harvest price option.

One new idea, Hoefner said, is to cap subsidies at a certain number of dollars per acre and give farmers the opportunity to choose how to spend that money. Hoefner also noted he expects there to be discussion of whether the government is enforcing the rule that beneficiaries of subsidized crop insurance must comply with conservation standards.

"Conservation compliance is totally hit or miss in whether it has meaning," Hoefner said.

Conservation compliance violations are only reported in 14 states, he said, with violations in Indiana, Iowa and Nebraska adding up to 75% of those cases reported. There have been no reports of violations in Kansas, Washington state, Illinois, Texas, Oklahoma and Mississippi, he added.

Hoefner also noted that the "sod-saver" law that restricts benefits when farmers break up land for crops only applies in about half a dozen states in the Upper Plains, and is not a national policy.

Lynn Jacquez, a principal at CJ Lake LCC, has worked for the House Judiciary Subcommittee on Immigration, Refugees and International Law. Jacquez said the farm bill has rarely dealt with farm workforce issues, but she hopes the topic is part of the next farm legislation. USDA could play more of a consultative role with the Labor Department and the Immigration Service, Jacquez said.

Ronnie Green, chancellor of the University of Nebraska-Lincoln, said efforts to increase government spending on research have failed and that advocates need to "think disruptively" about how to get Congress, particularly appropriators, to spend more on the research that has been responsible for so much agricultural productivity.

Eric Mitchell, director of government relations for Bread for the World, said the farm bill "provides food security more domestically and internationally" and that his organization will vigorously oppose any attempts to separate the farm program and nutrition programs into separate bills.

"It is important to keep the two together," Mitchell said, adding that Bread for the World considers the idea of breaking up the two titles to be "a huge target on our backs" because some members of Congress and some advocates think that is the way to save money.

"The beauty of the farm bill," Mitchell said, is that it merges food and farm policy.

In addition to the farm bill question, the group was asked whether foreign investment in U.S. agriculture is good or bad. About 24% said "yes" or "no," and 52% said "maybe."

Former Agriculture Secretary Dan Glickman, a co-chair of AGree, said the attendees responded to the question the way they did because people's views depend on what kind of investment it is. 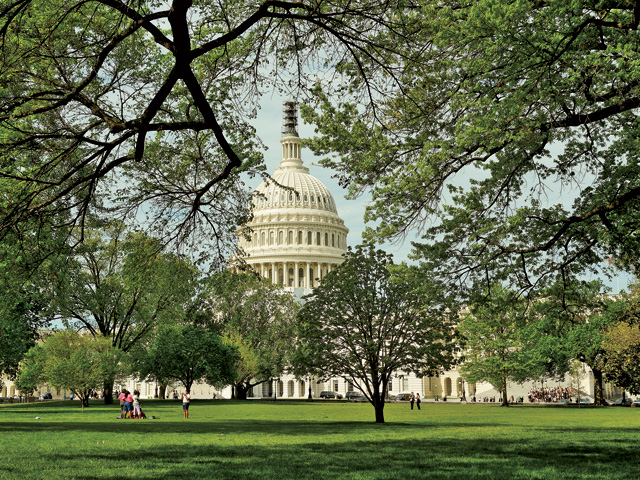