OMAHA (DTN) - A Scott Pruitt-led U.S. Environmental Protection Agency would place an emphasis on following the letter of the law including the Renewable Fuel Standard and providing clarity on a federal definition of navigable waters, in what the nominee told a Senate committee Wednesday would be a return to cooperative federalism with the states.

"Such cooperation is essential because clean air and water and a healthy environment are essential to the American way of life and key to our economic success and competitiveness."

The Obama administration's EPA has been criticized by agriculture and other interests for not taking their input into consideration before finalizing federal rules.

Though agriculture interests were alarmed by the total maximum daily load, or TMDL, implemented in the Chesapeake Bay by basin states and led by the Obama EPA, Pruitt told members of the Senate Environment and Public Works Committee the nutrients-reduction effort in the region is an example of how cooperative federalism should work.

That is, states in the region put together and implemented a nutrients-reduction plan that has, in fact, reduced nutrients flowing into the Chesapeake Bay.

At one point during the hearing Sen. Bernie Sanders, I-Vt., pressed Pruitt to agree climate change is caused by human activity. When asked by Democratic senators whether he agrees with President-elect Donald Trump's opinion that climate change is a hoax, Pruitt answered no.

Pruitt questioned whether there is consensus on climate science, but Pruitt also said EPA has an important role regulating emissions. Pruitt's answer still wasn't enough for Sanders who declared he would not vote for Pruitt's confirmation.

In his prepared statement to the committee, Pruitt said he would return the agency back to its core mission established by Congress.

"It is, after all, EPA's core mission to protect people," he said. "It is not EPA's mission to be against sectors of industry in general, or against particular states. My first and primary goal as administrator will be to return the agency to that core mission of protecting the American people through common sense and lawful regulations.

"In closing, my time as attorney general of Oklahoma afforded me the opportunity to travel my state meeting farmers, ranchers, landowners, and small business owners of all sorts. These are good people, hardworking Americans who want to do the right thing by the environment. They want the air that their children breathe and the waters in which they swim to be clean. They want to follow the law. But recently they have felt hopeless, subject to a never-ending torrent of new regulations that only a lawyer can understand. They fear the EPA, and that just shouldn't be the case."

Sen. Deb Fischer, R-Neb., said the EPA has been hard on Nebraskans in the past eight years. Fischer is one of several Midwest senators who met with Pruitt prior to the confirmation process.

She pointed to the effects of the waters of the United States, or WOTUS, rule, the agency's foot-dragging on approving new crop products, and repeated delays in implementing the Renewable Fuel Standard as issues farmers and ranchers need addressed.

"We are the largest ethanol producer west of the Missouri river, our neighbors to the east, Sen. (Joni) Ernst's home state, they do lead the nation in ethanol production," Fischer said.

Honoring congressionally mandated timelines and the volume requirements, she said, are critical for biofuels investors. "In our meeting, you did express your commitment to me to honor the law, and you echoed President-elect Trump's support for the statute itself and a strong RVO (renewable volume obligations), and for the record: can you please once again express your commitment to uphold the congressional intent of the RFS?" Fischer asked.

Pruitt responded, "Yes senator, and you said it well. To honor the intent and the expression of the Renewable Fuel Standard statute is very, very important. It's not the job of the administrator or the EPA to do anything other than administer the program according to the intent of Congress. And I commit to you to do so."

There has been concern in the Corn Belt about whether a Pruitt-led EPA would maintain the intent of the RFS. Pruitt said Wednesday his job as administrator would be to ensure the RFS is administered the way Congress intends.

By and large, the RFS going forward is designed to spark the development and production of advanced biofuels such as cellulosic ethanol and biomass biodiesel. That's because the RFS capped corn-ethanol production at 15 billion gallons that qualify under the law.

"In comments at today's Senate confirmation hearing, it was encouraging to hear EPA administrator nominee Scott Pruitt say he is committed to honoring the Congressional intent and purpose of the Renewable Fuel Standard, and that he agrees 'without question' that Congress intended the RFS to drive growth in the production and use of renewable fuels like ethanol," Dinneen said in a statement to DTN.

"It was also heartening to hear that Mr. Pruitt believes EPA's waiver authority with regard to the RFS should only be 'judiciously used,' and that he is committed to ensuring annual RFS volume requirements are released according to the statutory deadlines. It is indeed heartening to see Mr. Pruitt reflect the priorities of President-elect Trump and the American people, who overwhelmingly support the increased production and use of American-made renewable fuels."

As attorney general for Oklahoma, Pruitt filed one of many lawsuits against EPA on the waters of the United States rule. The rule is on a national stay and tied up in the federal court system.

If confirmed, Pruitt said part of his mission would be to better define navigable waters, which is at the heart of concern and opposition to the rule. By EPA's own admission, the rule would expand federal jurisdiction.

In his written testimony, Pruitt talked about an example of how cooperative federalism should work.

"When I was sworn in as Oklahoma attorney general, I was immediately confronted with an important water quality issue on the scenic Illinois River," he said.

"High phosphorous levels were causing a range of environmental problems, and Oklahoma -- the downstream state -- had been in a long-running dispute with Arkansas over how to control those levels. It's well understood that interstate water issues are among the most challenging in environmental law and policy.

"However, I worked together with my Democratic counterpart in Arkansas to reach an historic agreement to clean up that river. While this was a proud success of cooperation among the states, I also came to appreciate that if we had not solved these challenges among us, EPA would provide a vital function in ensuring the protection of the shared resources." 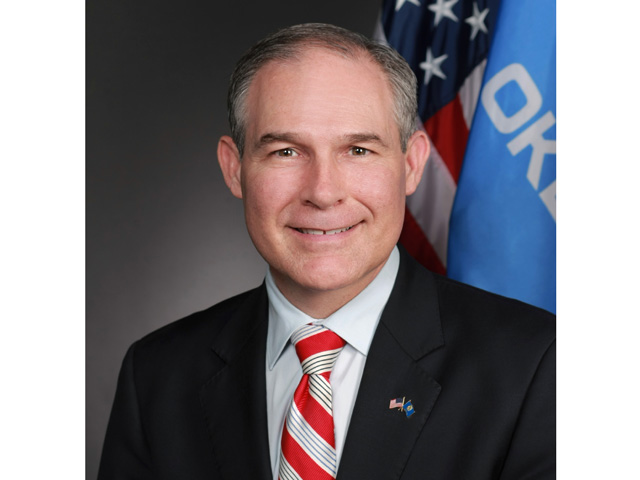