OMAHA (DTN) -- The American Farm Bureau Federation was among the groups supporting the nomination of U.S. Rep. Ryan Zinke, a Montana Republican, to be Interior Secretary.

"The nomination of Ryan Zinke for secretary of the Interior signals an important step toward balanced use of federal lands," AFBF President Zippy Duvall said in a statement.

The Interior Department controls lands that are used in ranching and farming as well as other federal lands. Oil and mining interests hoping for more access to federal lands said they were thrilled. While some environmentalists criticized the nomination, others praised it.

As the Washington Post noted, Zinke, 55, resigned from the Republican platform committee because he did not agree with a provision that said federal lands should be sold to the states.

In his statement, President-elect Donald Trump said Zinke "has built one of the strongest track records on championing regulatory relief, forest management, responsible energy development and public land issues. As a former Navy SEAL, he has incredible leadership skills and an attitude of doing whatever it takes to win. America is the most beautiful country in the world and he is going to help keep it that way with smart management of our federal lands. At the same time, my administration's goal is to repeal bad regulations and use our natural resources to create jobs and wealth for the American people, and Ryan will explore every possibility for how we can safely and responsibly do that."

Zinke said that as someone who grew up in a logging and rail town and hiking in Glacier National Park, he is honored and humbled to be asked to serve as secretary of Interior, according to the Trump transition release.

"As inscribed in the stone archway of Yellowstone National Park in Gardiner, Montana, I shall faithfully uphold Teddy Roosevelt's belief that our treasured public lands are 'for the benefit and enjoyment of the people.' I will work tirelessly to ensure our public lands are managed and preserved in a way that benefits everyone for generations to come. Most important, our sovereign Indian Nations and territories must have the respect and freedom they deserve. I look forward to making the Department of Interior and America great again," Zinke said.

The Trump release also cited that Zinke has led the efforts to renew the Land and Water Conservation Fund in Congress, and has also been an advocate for sportsmen to gain access to public lands with the SCORE Act and SHARE Act. Rep. Zinke also introduced the Resilient Federal Forest Act in Congress, which initiated new reforms for revitalizing America's timber areas and preventing wildfires.

Duvall said Zinke "has recognized that the federal government has an obligation to manage, rather than merely preserve, the 28% of U.S. land it controls. He supports a pragmatic, 'all of the above' approach to energy generation rather than limiting ourselves to one form of energy over another. He is a proven leader and qualified choice for the position."

Duvall added, "Congressman Zinke has a challenge before him. Farmers and ranchers have suffered abuse at the hands of the Interior Department."

Farm Bureau pointed to arbitrary limits on grazing have harmed animal agriculture. Wild horses and burros have overgrazed and overwhelmed the carrying capacity of arid lands, destroying not just grasslands but habitat for many other species. Officials at the department's Bureau of Land Management have systematically reduced the acres that can be ranched in direct conflict with the multiple-use mandate required by law. The Fish and Wildlife Service has continued to enforce an outmoded and failing Endangered Species Act, while national monuments policies have unfairly limited public access to critical natural resources, according to Farm Bureau.

"We know Congressman Zinke understands these issues and are encouraged that he is committed to just and balanced land use. He knows the law requires multiple land uses, not just one," Duvall concluded.

United States Cattlemen's Association Vice President Bert Paris said, "Rep. Zinke has proven experience working with the federal land management agencies to protect public lands, manage natural resources, and provide opportunity for those who live, hunt, recreate, and make their living on public lands. Rep. Zinke's professional and personal backgrounds within the natural resources and conservation sectors will serve cattle producers well across the country in the coming years. USCA commends President-elect Trump on this selection and looks forward to continued dialogue with Rep. Zinke throughout the transition process and in the years ahead."

Conservation, hunting and fishing groups were quoted as praising Zinke by the Trump transition team.

Dale Hall, CEO of Ducks Unlimited said: "We are pleased to see a hunter and conservationist nominated to the top public lands position and look forward to working with Rep. Zinke on issues of critical importance to conservation."

Rob Sisson, president of ConservAmerica said: "Based on conversations I've had with Rep. Zinke on a number of issues, I am confident President-elect Trump made an inspired choice. Mr. Trump's comments last week in North Carolina about public lands and the party's Theodore Roosevelt conservation legacy foreshadowed this caliber of nominee."

Paul Walker, executive director of ConservAmerica said: "His Montana background will serve him well in this role. About one-third of Montana's land mass is public, providing Rep. Zinke a firm grounding in the challenges inherent in the stewardship of public lands and local economies. His current constituency includes ranchers, farmers, loggers, hunters, anglers, Native Americans, miners, and high-tech innovators. In order to pass our great public lands legacy on to future generations, we need those groups to work more closely as stakeholders with appropriate government agencies. Rep. Zinke is a leader who can bring them together."

Land Tawney, Backcountry Hunters and Anglers president and CEO said: "Congressman Zinke understands the importance of public lands and balancing management of these important resources with energy development and other uses. As Montana's lone representative in the House of Representatives, Mr. Zinke has showed himself to be receptive to the interests of a wide range of constituents and a potential ally of sportsmen and other outdoor recreationists." 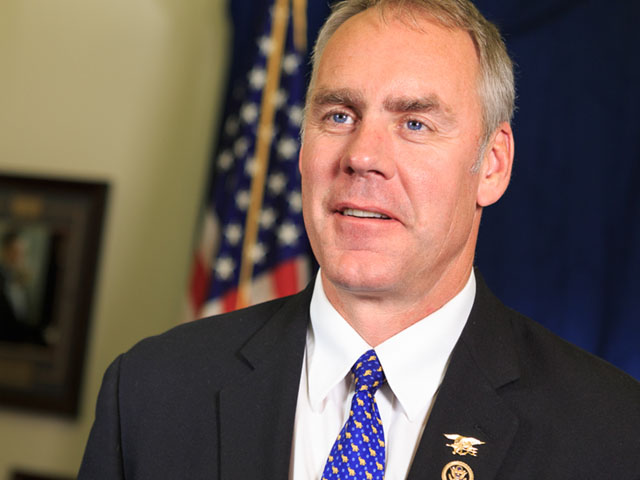