That's especially true considering poll trackers such as Cook Political Report peg Democrats as picking up five to seven seats in the Nov. 8 election and thus taking back the Senate majority. The current makeup of the Senate is 54 Republicans, 44 Democrats and two independents who largely lean Democratic. There are 34 Senate seats up for election, of which 24 are held by the GOP.

If the Democrats take control of the Senate, Senate Agriculture Committee ranking member Debbie Stabenow, D-Mich., would become chairwoman, a position she held when the 2014 farm bill was debated and passed. But the real question would be which additional Democrats might be added to the committee and which Republicans might have to drop off the committee in order to give the Democrats a majority.

The Senate Agriculture Committee website lists Grassley and Thune at the bottom of the seniority list. But that's because Grassley chairs the Senate Judiciary Committee and Thune chairs the Commerce, Science and Transportation Committee; Agriculture is a secondary committee for them. Just above them on the Republican list are the more recently elected Ben Sasse of Nebraska, Thom Tillis of North Carolina and Joni Ernst of Iowa.

There could also be changes on the Senate Agriculture Appropriations Subcommittee where Hoeven and Leahy also serve. Cook ranks Republican Sen. Jerry Moran of Kansas, who chairs the subcommittee, as "solid" for re-election.

But Cook has put Republican Sen. Roy Blunt of Missouri, another subcommittee member, in a "toss-up position." The Washington Post reported on Sunday that Jason Kander, the Democrat running against Blunt, as making headway in his race because Blunt's wife and children are lobbyists. The Post said that Republican presidential candidate Donald Trump's campaign against the Washington establishment has resonated with Missouri voters.

If the Democrats win control of the Senate, Sen. Jeff Merkley of Oregon, the current ranking member on the Senate Agriculture Appropriations Subcommittee, is in line to become chairman. The current ratio is seven Republicans to six Democrats, and that presumably would switch. The subcommittee roster lists Sen. Steve Daines of Montana at the bottom of the Republicans.

There are other races also of interest to agriculture, in some cases because they would influence which party controls the Senate and in others because of ties to agriculture.

In addition to the Blunt-Kander race, Cook ranks these Senate races held by Republicans as "toss-ups":

In Arizona, Republican Sen. John McCain, who has been a vocal opponent of both farm bills and ethanol, is running against Democratic Rep. Ann Kirkpatrick. Cook ranks the race as "leaning Republican."

In Ohio, Republican Sen. Rob Portman, a former U.S. trade representative who has been a reliable supporter of trade agreements until this year, is running against former Democratic Gov. Ted Strickland. Cook also ranks that race as "leaning Republican."

Charlie Cook wrote in a recent National Journal column, "The numbers tend to favor Democrats, but keep in mind that the swing voters who cast ballots for [Democratic presidential candidate Hillary] Clinton may not fully trust her and might buy the GOP argument that she shouldn't have 'a blank check.' This could lead to ticket splitting that could shift the advantage, ever so slightly, to Republicans." 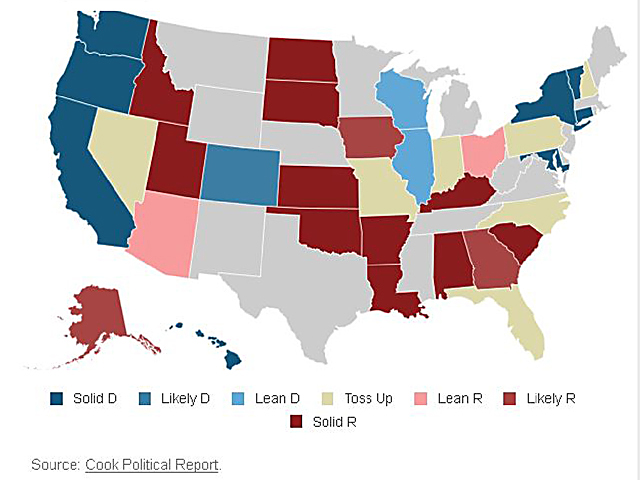