OMAHA (DTN) -- A coalition made up of large agribusinesses and various consulting groups released its annual updated Global Agricultural Productivity report at the World Food Prize Borlaug Dialogue in Des Moines on Wednesday.

The Global Harvest Initiative typically uses its agricultural productivity report to spotlight a particular topic in the U.S. as well as food production gains or challenges in a developing country around the world. This year the group tied together the needs of production, farmer economic needs in a down cycle and long-term sustainability goals for agriculture.

"Our board wanted us to have a stronger focus on the five public-policy areas and really go into those," Margaret Zeigler, executive director of the Global Harvest Initiative, said in an interview with DTN. "And they also wanted to put an emphasis on the current global agricultural cycle."

The Global Harvest Initiative got its start after the food crisis in 2008, which was driven by price spikes in commodities such as wheat and rice. The price shifts created turmoil in countries that rely heavily on food imports while at the same time it marked a strong market for farmers in the U.S. and other exporting countries.

"That was a time when people were being thrown into hunger, but it was also actually a time when farmers were doing pretty well," Zeigler said. "Prices were high with the food-price spike."

And yet the cycle has now decidedly turned. So the Global Harvest Initiative opted to place more emphasis this year on ways to look at the state of farming around the world and what kind of policies or strategies can support farmers during the current ag-business cycle. Zeigler said some of that decision was based on a letter an Iowa farmer sent her last year noting that farmers cannot stay in business when faced with a longer-term trend of lower commodity prices and what that means to food security.

"I thought we really need to pay attention to the challenges farmers are going through right now with the current business cycle," Zeigler said. "We wanted to look at what are farmers doing, how can farmers be supported, what are some of the strategies they are using and what is going on in other parts of the value chain? What should governments be doing? What's the role of the private sector, extension and universities?"

Food security has been improving in recent years. The United Nations Food and Agriculture Organization released a report last week showing the overall global food price index is up 10% from 2015, but the average cereal price is down 8.9% from a year ago because of record wheat production, a rebound in rice production and a large volume of coarse grains on the market, notably corn.

Zeigler added that productivity also needs to be viewed not just in terms of yield, but yield and production per unit of input. The Global Harvest Initiative uses a measure of Total Factor Productivity to measure how production is increasing while the inputs and resources used are either steady or declining.

"It's meant to be a way of also showing how farmers save on costs," she said. "One of the most important elements in a down cycle is getting a handle on your inputs."

Zeigler noted the long-term price trend for average commodities from 1900 until now shows a continued downward trend of prices globally falling 1% a year on average despite periodic price spikes.

High productivity continues to benefit most people beyond the farm gate. The Food and Agriculture Organization also has cited that from 2012 to 2015, the number of people defined as food insecure fell from 870 million to roughly 795 million, even as the global population grew by more than 235 million people.

The long-term trends also continue to show total food productivity in about 60 developing or underdeveloped counties continues to grow at a rate slower than the demands of population growth in the future. That gap in productivity in those poorer areas needs to narrow over the next 30 to 35 years for overall global food production to keep pace with population growth. This projected gap in long-term food production has been at the heart of the Global Harvest Initiative's focus since its inception.

The report also highlights the environmental footprint of agriculture and the need for farmers, food companies and governments globally to reduce greenhouse-gas emissions from food production. Regarding mitigation measures, the Global Harvest Initiative cites many activities already used by U.S. farmers such as the use of better genetics, nutrient management tools, reduced tillage systems, water management, agroforestry and grazing management.

"We always talk about the need for productivity and we always try to explain what we mean when we talk about productivity," Zeigler said. "We want people to understand it can be equally important and perhaps more important as we try to shift to a low-carbon future."

Zeigler added, "It's fascinating what that shift or those changes could mean for the developing world."

The report also noted that implementing such practices to reduce greenhouse gases builds resiliency in the cropping system while also potentially injecting increased private-sector investment by companies to help farmers use some of these tools.

Agriculture globally accounts for as much as 25% of greenhouse-gas emissions. That is largely due to the fact that agriculture is the dominant industry in most developing and underdeveloped countries. In major economies, the percentage of emissions tied to agriculture makes up a smaller share of a country's contribution to climate change. In the U.S., for instance, agriculture accounts for roughly 10% of all emissions while fossil fuel use for industry, power and transportation contributes higher emissions. 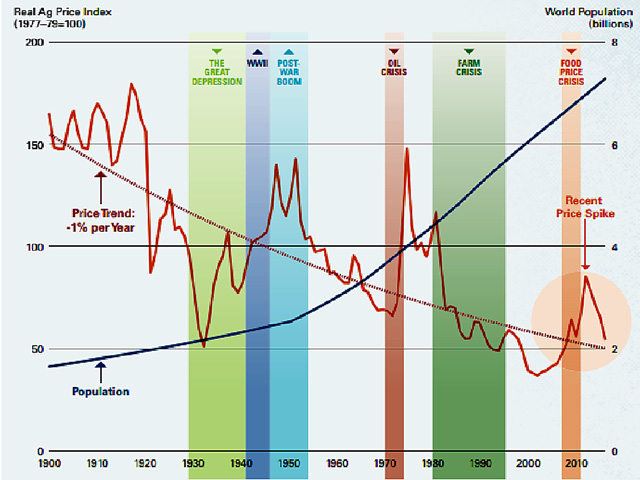