OMAHA (DTN) -- Falling commodity prices have been a primary concern for farmers and ranchers across the country, but the rising number of federal regulations are also weighing on the ag economy, members of the U.S. Senate Committee on Agriculture, Forestry and Nutrition told U.S. Agriculture Secretary Tom Vilsack during a hearing Wednesday.

The waters of the U.S. rule, or WOTUS; the Grain Inspection, Packers & Stockyards Administration, or GIPSA rule; and other regulations have the attention of both rural lawmakers and their constituents.

"These regulations have reasonable business men and women in agriculture truly concerned," said Sen. Pat Roberts, R-Kan., chairman of the committee. "The concern from rural America is there is fear they are being ruled and not governed."

What's more, as debate on the next farm bill will commence next year, the ability to maintain a strong safety net is expected to be front and center.

Sen. Joni Ernst, R-Iowa, said there has been much discussion in the committee and with farmers back in her home state about what can be done to turn the ag economy around.

"I'm always of the thought that less federal government involvement is better for our folks back home, not more," she said.

"And what I'm hearing mostly from our Iowans, especially the farmers, the ranchers, and our landowners, is that it really feels like the federal government is out to get them, and I see that a lot with a number of the rules and regulations that are coming forward."

Concerns about the GIPSA rule are that it will make it more costly for livestock and poultry producers, and more difficult for producers to contract with each other.

Ernst expressed concern USDA would take the same route as EPA did on the waters of the U.S. rule, where many agriculture interests believe the agency didn't seek their input before drafting a rule that expands EPA authority.

"That will not be the case here, I can assure you," Vilsack said, noting there will be a public comment period on the GIPSA rule.

"Senator, we'll make sure that we follow the administrative process in terms of what we propose," Vilsack said. "Since we haven't completed the work, I don't know what the final product is going to look like, but I can assure you that we're not going to put out something that doesn't allow people to review it, understand it, and to give us feedback on it."

In what may have been one of the final times Vilsack testifies before the committee, he touted the work USDA has done during his seven years as secretary and called on senators to take a different path during the upcoming farm bill debate in 2017.

In particular, Vilsack said with corn prices at or below $3 a bushel and other commodities seeing price drops this year while the costs of production remain relatively flat, that is exactly why farm safety nets are important.

When it comes to the next farm bill, he said he hopes Congress will start from a different position in 2017 than it did leading up to the passage of the 2014 bill. Back then, Congress was told to cut $23 billion from farm programs, forcing lawmakers to set priorities.

"When you start that way," Vilsack said, "you pit interests against each other. You need to start with: What is the need out there? How much it costs, then make the case."

Though Vilsack's written testimony highlights the work he's done to help the farm economy in the past seven years, he said there's no question ag is on the ropes. Some of the pain could be relieved, Vilsack said, if Congress ratifies the Trans-Pacific Partnership that many ag groups see as a win for farmers.

In the past two years, the combination of a strengthening U.S. dollar and relatively high global commodities production has led to lower prices, he said. That has led to a drop in net farm income from 2015 to 2016. USDA projects real net-farm income this year to be its lowest since 2009.

In addition, Vilsack said there has been a slowdown in the rise of land values in most agricultural regions, with some seeing values come down slightly from recent record highs.

Demand for farm loans has been increasing, he said, "driven in part by the need to cover operating expenses as commodity prices have fallen more quickly than costs.

"As a result, the debt-to-asset ratio for U.S. producers has increased over the past two years, but in aggregate is still near historic lows," Vilsack said.

Vilsack said the two programs have provided $5.3 billion in financial assistance for crop year 2014 to more than 1 million farms.

DAIRY ON THE ROPES

In addition, more than half of all dairy farms in the country have enrolled in the margin protection program for dairy.

Senators from a variety of dairy-producing states told Vilsack many producers are in crisis mode because of the drop in dairy prices.

Vilsack said the current margin protection program is configured in a way that limits USDA's ability to tailor the program to account for regional differences.

In recent months, USDA purchased some $20 million of cheese to help producers.

The margin protection program paid out about $11 million. However, Vilsack said that had producers stuck with the same level of coverage as in 2015, farmers would have seen some $40 million in payouts.

"I've spent every dime of credit you authorized," he said. "Everything I can do I've done." 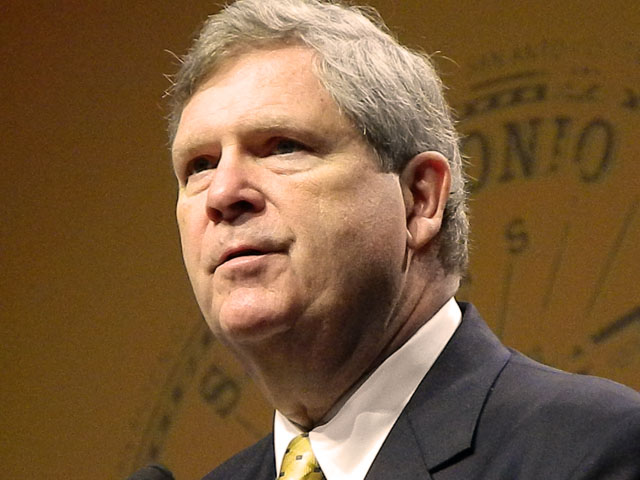