SORRISO, MATO GROSSO, BRAZIL (DTN) -- Farmers landlocked on the planet's most remote soybean production region have a secret to share. Things aren't as grim as the threat of Chicago's $8.50 soybeans or sub-$4 corn would lead you to believe. They've survived worse.

Just ask Brazil pioneer Darci Getulio Ferrarin, an athletic-looking 70-year-old, with a movie star's smile. "We're going through a messy market situation now, but we'll get out of it," Ferrarin told American farmers when they visited earlier this year. By mid-April, his northern Mato Grosso's cash bids there were running $8.43 per bushel, about half the price of 2012's glory days. But because the dollar has appreciated 50% against the Brazilian real since then, those U.S. dollars buy more in local currency. The windfall means Ferrarin is insulated from much of the pain North Americans feel, at least for the 2015 crop.

Ferrarin's own rags-to-riches story parallels the fate of Mato Grosso during Brazil's biggest soybean boom years. It's testimony to the fortitude of farmers and agribusiness here who face transportation and economic obstacles few U.S. farmers would envy.

"Five-dollar soybeans didn't stop them in the early 2000s," said Bob Tetrault, a Foreign Agricultural Service crop analyst who has monitored Brazil's soy expansion by satellite and ground visits for decades. With trends toward irrigation and double- or triple-cropping, "Brazil will surpass the U.S. as the world's top soy producer and just keep going," he said, leaving North Americans to concentrate on corn in the future. In May, USDA forecast the next crop Brazilians will plant could reach a record 97 million metric tons in 2015/16 -- up nearly threefold from its 37.5 mmt crop at the turn of the century.

"It will be hard for Brazil to grow as fast as it has from 2000 again, but in five years they could easily be producing a soybean crop another 20% bigger than today's," Tetrault forecast.

Northern Mato Grosso was largely jungle until the 1980s, with land clearing and thick smoke still choking the air around Ferrarin's hometown of Sorriso when he settled only 15 years ago. Except for some early warnings from FAS crop forecasters like Tetrault and others in the late 1990s, few U.S. farm organizations or policymakers seriously considered that Brazil would end America's 50-year dominance of world soybean markets any time soon. Now Mato Grosso alone produces 30% of the country's soybeans and nearly 9% of the world's production. Officially, USDA expects Brazil as a whole will export about 46 million metric tons of soybeans this year, just slightly below 48.7 mmt for the U.S.

Meanwhile, the frontier that Ferrarin and his family settled is no Wild West today. Environmentalists and bankers monitor satellites to make sure growers stay within their permits and don't illegally log native forests. Sorriso remains the richest agricultural district in all Brazil, a sort of plateau wilderness turned into Champaign County, Illinois, or Webster County, Iowa, just in a man's lifetime. The farm town's population now tops 70,000 and boasts exclusive California-sized gated communities, along with a shopping mall, Best Western-style motels, a Cineplex and state highway BR-163 crowded with agribusiness giants like Cargill, ADM, Bunge, Syngenta, Deere, Pioneer and Monsanto. In August, the farm town will even open its first commercial airport, linking it to the state capital, Cuiaba, as well as international hubs like Sao Paulo. Sinop, the town an hour north by BR-163, now offers five commercial flights a day and passengers are likely to include U.S. farm tours, National Geographic photographers and fund managers from New York, looking to invest in farmland.

Ferrarin had grown up with 11 siblings on a 60-acre farm in southern Brazil. It was a family so poor, he remembers his father owning just two sets of clothes. With the farm too small to split among them, his parents prodded their children to leave home, saying "the world was waiting for them."

By 1998 Ferrarin had sold a business, then recruited his son Darci Junior, 19 years old at the time, to help him reinvest the profits in 60,000 acres of real estate on the edge of the Amazon Rain Forest near Sorriso. The subprime land -- about 70% degraded pasture -- averaged a mere $160 per acre. But the farm was stuck in the middle of the continent, as remote from an ocean port as Minot, North Dakota, is from Seattle. There were no railroads anywhere in the state and no paved roads for miles. A trip to Sorriso -- 12 miles away -- required a ferry crossing on a major river. Trucking soybeans 1,200 miles south to the Port of Santos took a week or more.

Even today, this dependence on trucking to port means it cost about $91 per ton to ship soybeans from Sorriso to export terminals in Santos. A trip from Davenport, Iowa, via the Mississippi River to New Orleans ran only $60 per ton in late 2014, the U.S. Soy Transportation Coalition estimates, an edge that makes soybeans more profitable in North America.

Fighting lack of infrastructure was one thing, but then dark years hit the soybean frontier, draining reserves of many farm owners without deep pockets. Chicago soybean prices temporarily plunged to $4.15 per bushel in 2002. A few years later, an epidemic of soybean rust hit. Renowned plant breeder Norman Borlaug compared the fungus' destruction to North America's 1970 southern corn blight. Meanwhile, the collapse of the U.S. dollar against foreign currencies further slashed soy revenues and made it hard to repay debts -- especially farm machinery pegged to U.S. dollars.

"Soybeans are priced in dollars, so it took more and more Brazilian reals to repay their high-interest debts," recalled Kory Melby, a Minnesota farmer who relocated to Brazil in the early 2000s and now consults for U.S. farm business investors. "For Brazilian farmers, all this was the perfect storm."

After China reversed its policy of soybean self-sufficiency in 1995 and built the world's largest soy crushing capacity, global soy demand surged. Chinese soy imports rose from virtually nothing in the early 1990s to 70 mmt in 2014, more than half all soybeans traded in global markets. That surge drew new lands into planting worldwide: Brazil led all other countries by adding 27.7 million new acres of major crop production between 2005/06 and 2014/15, according to Purdue University economist Chris Hurt. A mature country like the U.S. could only muster 9.8 million new acres.

Eventually, soybean wealth trickled back to Brazil's cerrado, including the youngest frontier regions. By 2015, the Ferrarins had parlayed their investment into a $150 million agricultural showplace, including another 40,000 rented acres, an elite breeding herd of Nelore cattle and 140 employees. Cropland they purchased for $160 per acre and sweat equity now commands about $6,900 per acre.

There's more room for real estate values to grow. Finishing a northern export corridor -- including the final paving of a soybean highway known as BR-163 with a direct link to Amazon export facilities -- gives land investors along the soybean highway reason for hope. As capacity in four major ports grows over the next five years, freight rates could drop $50 to $60 per ton, Mato Grosso's corn and soybean association Aprosoja estimates. That could boost local soybean bids by $2 per bushel, eventually lifting land markets just like ethanol plants boosted Iowa farmland values in the 2000s.

SURVIVAL OF THE FITTEST

For the moment, however, Mato Grosso soybean growers are forced to master low-cost farming. To generate more income, growers now double crop four out of every 10 acres, the highest percentage in Brazil. To squeeze a second crop out of their rainy season, they direct seed 120-day corn immediately behind 17% moisture soybeans in January, beating the clock before rains stop in March and the winter's dry season begins. Although many growers embraced biotech stacked traits, especially RR2 Intacta, some switched back to 100% conventional seed this year to save on royalties. They skip expensive frills like precision farming, preferring speed over spoon feeding.

"My dad's a big fan of [soybean yield champion] Kip Cullers," Darci Junior said, noting Cullers has visited the farm and shared his advice. "But I tell him we can't farm like that. It would bankrupt us."

Most producers in Mato Grosso will break even on the 2014/15 crop just harvested at $9.50 per bushel, and more than half the crop was pre-sold above $10.50, according to Aprosoja, the state's corn and soy grower association. So no one is predicting catastrophe here, yet. But big farms demand big operating budgets, and interest rates are on the rise. For example, a sugar mill paid up to 15.25% interest on a Brazilian real-based loan in February, up from 10.25% two years earlier, thanks largely to Brazil's deteriorating economy and currency ills.

Melby cringes when he looks at forecasts of Mato Grosso farm budgets for 2016, with seed up 23%, fertilizer up 32% and chemicals up 42%. By his calculations, it will take about 51 sacks of soybeans per hectare (46 bushels per acre) to breakeven without land cost rent, depreciation or labor, if IMEA's budgets are correct. The state's average yields run only 52 or 53 sacks per hectare, not much margin for error, Melby said.

Buffering the damage is that the boom in commodity prices between 2006-2014 helped average Mato Grosso operators earn impressive profits, exceeding 30% gross margins each of the past eight years, according to Rabobank. While some large farm operators already are unable to acquire the credit they will need to plant the crop next September, Darci Junior said their family will manage largely because they resisted the urge to expand when soybean prices reached the peak of the cycle.

"It's a game of survival of the fittest, of those who can manage debt," agreed Andy Duff, a food and agri-research team leader for Rabobank in Sao Paulo. "Farmers who live through the process will be good at what they do."

In the past, the wave of profits vaulted Brazil into a neck-and-neck race with the U.S. as the world's largest soybean producer and exporter in just 15 years: By the latest estimates, Brazil harvested a record 94.5 mmt of soybeans this year, nearly triple its 1999/00-crop production and not far behind the U.S. 2014 harvest of 108 mmt. (In 2013, the U.S. produced only 91 mmt). But the country's upward trajectory as an ag producer could slow.

Even natives complain about the "Brazilian cost" -- a buzzword for transport inefficiencies, excess bureaucracy and government graft. When a farmer hires an employee, he pays $1,000 in government taxes for every $1,000 in salary, Darci Junior said, discouraging employment. Agribusinesses that operate in Brazil say their tax departments run five to 10 times bigger here than back home in the U.S. It takes creditors 10 years to recover collateral if loans go bad, so many conventional banks hesitate to make mortgage loans and most land purchases remain seller financed. Dreamers like the Ferrarins criticize Brazil's corruption and would trade for a U.S. system any day of the week, but have managed to adapt.

In fact, Darci Junior, the family farm's president and financial chief, may try his hand pioneering again. The now 35-year-old says he has his eye on acquiring another 37,000 acres of pasture 240 miles north of Sorriso, closer to the Amazon, and currently selling for about $2,500 per acre. "You need three years to convert degraded pasture to cropland," he said. "If you keep going north you still have cheap land, but you have to invest and improve it. Plus, it's like farming in the middle of Yellowstone." Of course, he's done that before.

EDITOR'S NOTE: Marcia Zarley Taylor returned to Brazil for her sixth trip to the soy frontier since 1998 in February, accompanying a Rabo AgriFinance customer tour.

You can see more of her observations in her blog "What's New on Brazil's Old Frontier", along with satellite imagery of how the region has transformed. Check out http://bit.ly/…

-- Backwater to Breadbasket at http://bit.ly/…

To see the Reporter's Notebook video with Taylor talking about changes in Brazil, see http://bit.ly/…

Marcia Zarley Taylor can be reached at marcia.taylor@dtn.com 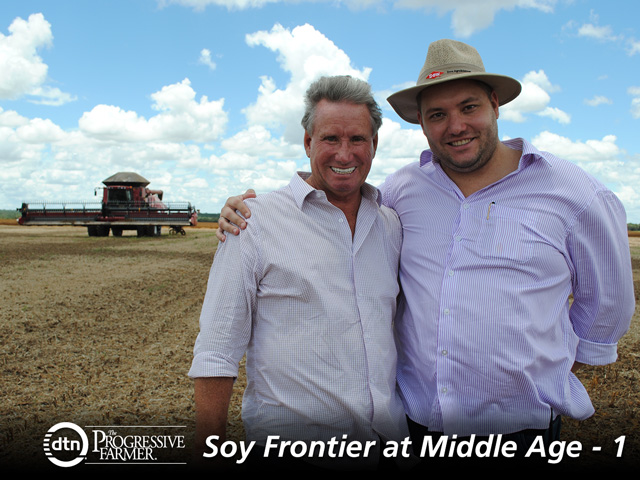