Steve Berger and his dad, Dennis, have been no-till farming since the 1970s in southeast Iowa near Wellman. For the past 15 years, they've been planting cereal rye cover crops behind every inch of their 2,000-acre, 50/50 corn-and-soybean farm.

Still, contrary to much conventional coffee-shop wisdom, which favors clean-tilled conventional management for high yields, the Bergers' corn fields average about 225 bushels per acre, and they bin about 20% more harvest than their county average each year. In 2014, they saw their first 300-plus bushel-per-acre corn yields on their farm.

Steve is quick to point out producing high corn yields on land that has had no tillage in more than 30 years is unusual and offers many challenges.

"Everything has to come together perfectly, even Mother Nature, in the good years," he said. "But our no-till practices and 15 years of using cover crops have given us very productive soils capable of quick water and nutrient infiltration."

Growing green matter nearly year-round takes nutrients. That's Berger's first "must" for high corn yields -- that sufficient nutrients are available to manage residue in the fall and that they are available when the corn plants need them in the spring and summer.

Within days of corn harvest, the Bergers use a CrustBuster wheat drill to plant 45 to 50 pounds of cereal rye as a cover crop in the harvested acres.

"We never want to see our soil -- we want something growing on it at all times," Berger said.

He also broadcasts about 150 pounds of ammonium sulfate for a total of about 30 pounds of N, while weather conditions are still warm. The same rye cover crops also follow all soybean production on the Berger farm.

"This application is very stable and doesn't allow N to be lost through volatilization," Berger explained. "We also surface-apply swine manure from our farrow-to-finish hog operation in the fall, but we have to follow very stringent application plans based on P and K content, according to state manure management regulations. We make those applications when it is cooler to avoid odors and insects."

After years of no-till, the surface applications are taken up in the soil quickly, Berger said.

"When we were injecting manure, it streaked the corn, and we found the corn was having to grow to the manure. We finally opted to surface-apply the manure and the ammonium sulfate and noticed our fields stay greener, and we avoid that 'ugly phase' when corn root systems transition."

In spring, the fall-drilled cereal rye is terminated with glyphosate. A 32% UAN liquid application makes the third source and formulation of N applied to the field before corn is planted into the rye stubble, Berger explained.

At planting, the Bergers' corn gets 3 gallons per acre of 6-24-6 in-furrow fertilizer, which includes a micronutrient package, as well as Capture insecticide to protect against wireworms, grubs and cutworms. Also, behind the planter, a second application of 32% UAN is dribbled on just behind the spike wheels at a rate of 35 to 40 pounds of N.

"We used to have an injector with a 3X2 band," Berger said, "but they are heavy and require a lot of maintenance, and it was one more coulter in the ground we could eliminate. Dribbling is simple and easy, and we think it makes the N more available for infiltration in spring rains. It's worked well for us for four to five years now."

The Bergers finish spoon-feeding their corn with a 50-pound N sidedress with 32% UAN at the V6 growth stage at the same time they apply post-emergence herbicides.

"We're experimenting with plant populations on our corn acres, but we're usually right at 35,000 to 36,000 plants per acre on 30-inch rows. We're pushing the limits on that, but it's important for canopy cover," Berger said. The Bergers plant seed from Monsanto (including DeKalb), Pioneer, AgReliant and Wyffels. They choose 110- to 115-day maturity hybrids with high-yielding backgrounds.

Berger said they try new hybrids each year and observe them for stand emergence and uniformity of growth, and try to hang on to well-suited hybrids for several years.

Planting chores are done with a John Deere 1770 NT 16-row central-fill planter, and over the past seven years or so, it has received the following upgrades:

-- DeltaForce downpressure on each row to maintain uniform seed depth

"We've had the 20/20 monitoring system from the outset," Berger explained, noting the ability it has to keep track of what's going on at planting is astounding. "We rely heavily on our precision planter to do its job to give us the yields we get year after year," he added.

As confirmed no-tillers, the Bergers have removed the coulters from the front of the JD 1770 and run only the row cleaners to move residue at planting.

"Others have said it, but effective planting in no-till fields begins at the back of the combine," Berger said. "You have to have the straw spread evenly in the fall, or you'll have problems at planting time."

Berger had that down pretty well back in his "narrow days," but now he's running a 45-foot MacDon draper head and a factory straw spreader on his Case IH Axial-Flow combine.

Berger said his family's experience with no-till farming and cover crops has proven to him that his yields do not have to take a hit.

"We've been building organic matter in our fields through the cover-crop years, and that helps provide a very healthy soil capable of sustaining yield-enhancing root growth," he said.

The following are some of Berger's corn yield tips:

-- Plant in a stable seedbed capable of allowing good root growth and nutrient uptake.
-- Don't scrimp on your planter and aftermarket attachments to ensure proper seed placement.
-- Provide adequate N for residue decomposition and crop yield goals.
-- Use in-furrow fertilizer and insect control.
-- Plant a variety of hybrids and choose for uniformity of growth and yield.

Editor's note: From its very first day, the corn seedling is under attack by much of the world around it. Weeds are its biggest threat, stealing yield from the moment the corn seed settles into the bottom of the seed trench. In this series, DTN/The Progressive Farmer looks at why weed control and good early season practices are key to producing high-yielding corn crops. This is the sixth and final story of a six-part series. 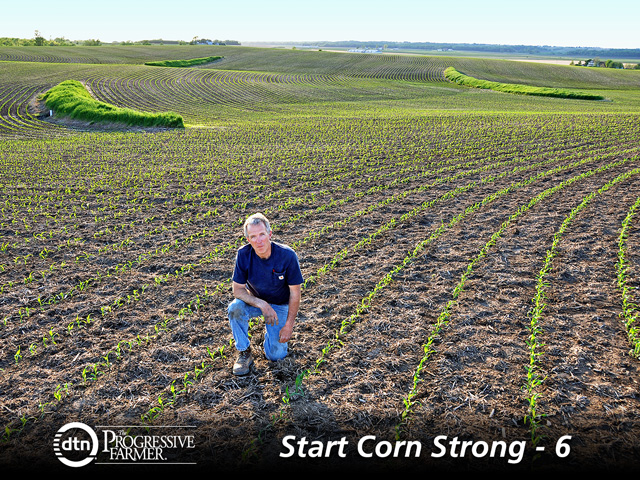