October is a demanding time of the year for Goodknight Farms, at Chattanooga, Oklahoma. As harvest progresses, the operation also fills orders for wheat seed in a business with a 25-year reputation for a high-quality product. Seed sales are an important, value-added niche for the Goodknight operation, consuming human capital and the farm's entire wheat crop -- one year it tallied 110,000 bushels in sales.

It was business as usual one October mid-morning, a Monday, in 2013. John Goodknight waved goodbye to his son Cody and left on an errand to the Tri-County Gin in Chattanooga. At the intersection of Highway 5 and Oklahoma 36, his truck violently collided with another vehicle.

John Goodknight sustained severe head injuries. He was flown by a MediFlight helicopter to the Oklahoma University Medical Center Trauma One unit in Oklahoma City. That was 110 miles from Cody, who was planting wheat, harvesting cotton, managing wheat seed sales, and wondering if Goodknight Farms' patriarch would survive the night.

But in the few seconds it took for the accident to occur, Cody became the go-to manager for Goodknight Farms.

"I was pretty upset," Cody remembered. But he was certain he was ready for the responsibility. "My father instilled in me the desire to be above average," he said. "Ensuring that our customers get a fair deal is an integral part of Goodknight Farms' policy."

It was a father's lessons that gave Cody, staring straight into the face of tragedy, the business ethic to stabilize the farm. John did recover. But on that October day, Cody moved firmly into the management chair.

Now, two years later, Cody described how a 30-year-old molds the business strategy of a dryland farm with 3,200 acres of grain crops and cotton, a commercial harvesting branch and a growing cattle enterprise. "I learned from my dad how to add value to the products you sell. We take wheat production to another price level by the hard work of cleaning, segregating and [selling it as] certified seed," he said.

"I do the same thing with heifers by sorting them into similar groups and breeding them with the correct genetics. These niches allow us not to be affected as much by falling commodity prices," he added.

Goodknight Farms is an equal partnership between Cody and his father. It is 4,800 dryland acres, with 3,400 acres owned by the farm. The land base includes 1,600 acres of native range and pasture with improved grasses.

NOT AT THE RIGHT TIME

The soils of Goodknight Farms are a mix of clay, and the rain is often not enough or "too much not at the right time," said Cody.

There seems to be few crops this farm has not tended. Its primary cash crops are wheat seed, cotton and milo. The farm has also raised sunflowers, sesame, oats, canola and winter peas. There is a custom-farming enterprise. It includes no-till planting, spraying, seed cleaning, harvesting and trucking. Cody does custom work on about 3,000 acres locally and has wheat-harvest customers in Oklahoma, Texas, Kansas and Colorado.

The crop ground has been no-tilled for 15 years. "Dad went into no-till, all or nothing," said Cody, explaining the practice was not widespread then. "No-tilling respects the soil under the surface, and the ecosystem under the soil protects the surface," he said.

Goodknight Farms has incorporated cover crops into its crop-management practices. This is in a region where tradition would argue that a cover crop drinks up valuable water for no good result. But Cody would beg to differ. Cover crops improve soil health and tilth, and speed water infiltration -- preserving groundwater supplies, he believes. His cover crop includes oats, winter peas, turnips and radishes. In 2015, he added millet, sudangrass, sunflowers, vetch and chickpeas. "The plants thrive for one another," Cody said. "We are trying to imitate nature."

It's for his skill in taking over an operation in crisis, for managing its diverse business interests, for a strong conservation ethic and for his involvement in the future of agriculture that DTN/The Progressive Farmer names Cody Goodknight one of its five America's Best Young Farmers and Ranchers honorees for 2016.

"Cody has many of his father's attributes," said Gary Kafer, vice president at Chisholm Trail Farm Credit, in Duncan, Okla. "[He] understands the importance of staying diversified and innovative in [his] farming practices. Their crop rotation practice is not only about profit, but also maintaining proper conservation techniques that promote fertility and decrease erosion."

"The heifers allow me to manage cattle numbers through a drought better than mature cows, because I can transport them to a feedlot or rented pasture easier," he said. "Or I can sell undesirable animals."

Heifers are moved as a single group every few days among pastures 20 to 100 acres in size. Short-term, intensive grazing controls weed growth (mesquite, for one) and stimulates forage production. "If I had a quarter-section of grass all in one fence, I'd have to run 20% fewer cattle," Cody said.

Cody has tapped into a valuable marketing channel for his cattle -- the Fort Worth Stock Show. With pens of 10 bred heifers or first-calf pairs, the commercial heifer show and sale draws cattle from ranches across Texas, Oklahoma, Kansas, Colorado and New Mexico. Cody has placed in the show for five years, one year with a Reserve Grand Champion. "I feel that by displaying my cattle in a setting such as Fort Worth, it allows customers to see the quality of replacements I raise," he said.

Cody has one big plan for the farm, even as his office manager cautioned him about climbing on his soapbox. Cody explained, "My goal is for Goodknight Farms to become completely independent of assistance from crop insurance, government subsidies and farm programs. The target date to be off all farm programs is within 10 years."

He planted his 2015 spring crops and winter wheat without crop insurance. Cody has been thinking about this for a while. He said 2012 and 2014 "worked out well for insurance. There were large payouts. It will be a challenge to give them up," he admited. But by evidence of a 10-year production history, Cody believes crop insurance payouts don't cover the costs of insurance or insurance regulation. "Rules and regulations get in the way of expansion and diversification," he said. "Double-cropping and cover crops allow me to do what's best for the land on my farm without worrying about an insurance check."

In this venture, Cody is pretty philosophical about the risks he may be taking. "I am Goodknight Farms' tomorrow. If I never have a failure, then I am not trying enough new things."

This is the fifth and final of five profiles of our sixth class of DTN/The Progressive Farmer's America's Best Young Farmers and Ranchers. They are among the best of their generation. They embrace the future of agriculture and are developing the technical and managerial skills to build their own successful businesses. To see videos of all the winners, please go to http://bit.ly/…. 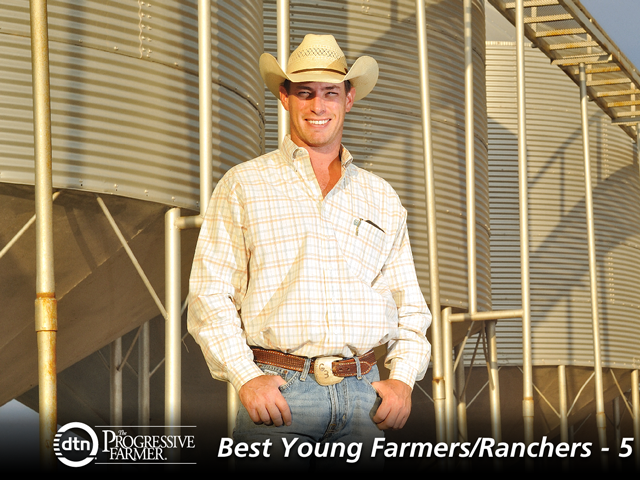