The pigs Andrew Crush owns root in soil forming the eastern foothills of the Blue Ridge Mountains, near Lovettsville, Va. Enclosed in four-acre paddocks, bound by a knee-high strand of hotwire, heritage breeds -- Large Blacks and Mulefoots -- live out their lives in oak and hickory forest.

Many will find their way to high-end restaurants in Washington, D.C., only 60 minutes away, and other East Coast cities. They arrive there as a whole carcass. Chefs buy everything but the squeal for $4.50 a pound. Others are sold through a Community Supported Agriculture (CSA) venture. Several dozen shareholders pay premium prices for the sustainably raised cuts of pork, along with beef, goats, lamb and locally raised chickens.

In a nutshell, this is Crush's 11-year-old business, and his family's 400-acre Spring House Farm. The operation sits in northern Virginia's Loudoun County, in the middle of a market with 8 million people, all of them within a three-hour drive of his farm.

Andrew, 40, grew up in southern Virginia, hunting the woods between Lynchburg and Smith Mountain Lake. He worked summers in Alaska, graduated from Tidewater Community College in Virginia Beach and worked as a mechanic repairing Rolls Royces and Bentleys. He spent three years earning his paramedic's certification and now works full-time for the Fairfax County (Virginia) Fire and Rescue Department.

Farming was never in the plans. "I never thought about farming," Andrew says. Still, Spring House Farm came to be -- and as destiny for his family, it makes a certain amount of sense.

"I had talked to Liz (his wife) many times about wanting to have children who have a place to be outside in the environment, in the woods, hunting and fishing," Andrew says. Their daughter, Amelia, 7, and son, Wyatt, 4, have that place now, however improbable it seemed back in the days of tuning handcrafted Bentleys.

Liz and Andrew founded Spring House Farm in 2004 on 10 acres, just a stone's throw south of the Potomac River and the Maryland state line. The "Spring House" name came from the location of a spring house on the property. The property has some historical significance. Here, Loudoun Rangers killed a horse trader during the Civil War. The ranks of the Rangers, filled by Southern sympathizers, were offended that this particular horse trader was selling stock not only to the South, but also to blue-coated Yankees.

"Initially, our goal was to produce higher quality, more flavorful meats for our family," Andrews says. "We had long-noticed a lack of high-quality meats in stores." Andrew started with chickens and goats, which promptly escaped their wired confinement. He added pigs, initially, based on advice they would feast on the copperheads preying on his goats.

Grady Parker, an old-timer from North Carolina, told him so. "Boy," Parker said, "if you get yourself a hog, you'll never have a problem with snakes. Snakes to a hog is like cupcakes to a fat kid." Andrew put out some hogs and, in a fashion similar to that of the horse trader, the snake problem was soon resolved.

When Andrew butchered his first hog, "We were blown away by the taste," he recalls. The meat was red, almost the tint of beef -- and the fat made it highly flavorful.

"As we began raising pigs, we noticed growing demand among friends and family and decided to expand our operation," Andrew says. He found customers among enthusiasts of the farm-to-table movement -- local production marketed to local consumers. Among his first efforts, Andrew delivered two chops to chef Jason Lage, who commands the kitchen at Market Table Bistro, a farm-to-table restaurant in Lovettsville. "Try these and tell me what you think," Andrew urged. Lage thought Andrew had mistakenly brought him cuts of beef. Prepared and served, they quickly earned Spring House Farm its first restaurant customer.

As demand swelled, Andrew pushed to find more land. Leasing land was not and is not an easy undertaking in a market selling high-priced residential parcels like hotcakes (the average income in Loudoun County tops $120,000 a year). "It's hard for a new guy to get his foot in the door," he says. But with time, Spring House Farm grew to 400 acres. Most of the land is leased under long-term contracts.

Andrew raises the big-eared Large Blacks and solid-hooved Mulefoot hogs, first on pasture to about 100 pounds. He moves them to the woodland paddocks where they finish at about 300 pounds on a commercial feed diet and whatever worms, grubs, acorns, insects -- and apparently, snakes -- they can uncover. Andrew tried several breeds of pigs, but found the Large Blacks and Mulefoots best fit the operation. They are mild-tempered, the sows are good mothers, and both breeds adapt well to hot summers and cold winters, he says. The stock is birthing about eight piglets a month.

CLOSE TO THE CUSTOMER

Andrew is an enthusiast of the farming philosophy of Virginia-based farmer and author Joel Salatin. Salatin preaches a holistic approach to farming. "His local, direct-marketing approach to selling his products has helped create my own philosophy and business model," Andrew says. He adds the customer base for an operation such as Spring House Farm must be engaged and educated by the producer.

"Our products are considerably more expensive than [conventionally raised] meats. Our customers want to know where it comes from, what goes into them," Andrew says. Spring House Farm specializes in sustainably raised meats, including beef, rabbit and goat meat in addition to pork. The family also produces honey and purchases locally raised and sustainably produced chickens. The Large Black is more a cooking pig, for direct consumption, Andrew says. It will produce a pork chop that may command a menu price of $25, he added. Mulefoots, with a history traced back to the Old Testament, are better prepared as cured products.

Andrew found inspiration too, for his business in "Tree Crops: A Permanent Agriculture." The book was written by economist J. Russell Smith and published in 1929. Salatin, who has raised pigs in woodlands, recommended the book. Smith decried the planting of grain crops on hillsides. "Plowing corn is the most efficient way for destroying the farm not made of level land," he wrote. Hillside grain farming, he noted, followed a predictable pattern: forest, field, plow and desert. Smith described a two-story agricultural system, with grains in the valleys and flatlands and deliberately cultivated trees, bearing annual crops, growing on thin-soiled hillsides.

Livestock raised on a woodland's bounty is a business opportunity Andrew didn't expect. The pork has a bolder flavor, he says. "But not a wild taste like deer. It's more distinguished. You know you are eating pork, because you taste the flavor of the meat."

Kyle Bailey, executive chef at Birch & Barley in Washington, D.C., is a fan. "The time commitment and effort involved in raising a heritage breed is considerable. But Spring House Farm provides the flavorful meats that our customers want," says Bailey, who has worked with Andrew for two years.

For his deep commitment to his production practices, for bringing rare meats to fine dining, for his knowledge of his market, DTN/The Progressive Farmer has named Andrew Crush one of America's Best Young Farmers and Ranchers for 2016.

"I've gotten to the point where I like when [a new chef] treats me like crap," Andrew says. He takes two pork chops to the restaurant, introduces himself and invites the chef out to the farm. "I promise you it will be the best pork chop you've ever had," he tells them, often to an underwhelming reception. "But then two or three days later, I get a call. It's the best chop they've ever had," Andrew says. "We're not looking for a massive audience -- we are looking for the perfect meal. We let the meat do the talking for us."

Finding a chef willing to prepare a couple of chops is one thing. Selling restaurants whole carcasses for $4.50 a pound is an entirely different marketing effort. In that effort, he brings to the table the expertise of French-trained and master butcher Marc Pauvert. Pauvert, with nearly 50 years of experience in his craft, is head of charcuterie at the Four Seasons Hotel in Baltimore. Charcuterie is a branch of cooking devoted to preparing meat products, such as bacon, ham, sausage and pates. Pauvert is known nationally for his pates, terrines (similar to a pate) and sausages. He assists Andrew in teaching whole-animal butchery. Andrew's association with Pauvert was key for Bailey. "Andrew [and Pauvert] help provide our skilled chefs and charcutiers with the skills and tips they need to use entire animals from nose to tail."

Today's restaurant customer is looking for adventures in eating. "Ten years ago we wouldn't have been able to do what we do today," Andrew says. The potential profit has opened many a chef's eyes. A hog that costs the chef $1,000 can bring $5,000 from diners ordering dishes prepared from parts of a hog that aren't often found on a menu.

Andrew's work brought him national acclaim by way of the Cochon 555 competition. The event pairs local chefs with local farmers who prepare innovative pork dishes. In 2013, Spring House Farm won the Miami Cochon event and participated in the national finals at the Aspen Food and Wine Classic. "Cochon encourages whole-animal butchery. If it weren't for that event, we would not be where we are today," he says.

He finds his customers enjoy preparing unique dishes. Shareholders spend upwards of $669 for a "Family Share" package. It includes biweekly deliveries of 9 to 14 pounds of meat.

The Lovers Share and the Sampler Share are two smaller packages. The farm's CSA website is populated with recipes -- from apricot pork roast to pickled pigs feet and bone broth. Meat shares are delivered to nine locations in Washington and northern Virginia.

"Rather than selling our meats at farmers markets, with two active young children and busy day jobs in addition to our farming responsibilities, Liz (a teacher) and I decided that a weekday CSA delivery program worked better for us," Andrew says. Spring House Farm serves an active Facebook community of more than 700 fans.

Andrew plans to open a butcher shop. "This will be a dream come true for us, as we focus on educating consumers and restaurateurs about whole-animal butchery," he says. "We're finding that consumers are more open to old-school cuts of meat."

Spring House Farm may expand the reach of its CSA into Maryland. Andrew is considering broadening the offerings of the Spring House Farm CSA. "We are looking into setting up a beef cow-share program that would allow members to buy a cow, which we would raise and butcher for them."

Andrew's and Liz's plan was to begin a small, self-sustaining farm. "My goal was to have someplace for my kids to grow up," he says. Spring House Farm has become that. Amelia is taking on feeding chores. Wyatt tags along with his dad everywhere.

"I've developed a business model that has worked for me and my family. I've pursued it by making connections with like-minded chefs and adventurous, nutrition-oriented consumers," Andrew says. "I could work overtime for the fire department. Or I could be a mechanic [to earn more income]. But I wouldn't have been out here with my kids, farming and being a dad."

This is the second of five profiles of our sixth class of DTN/The Progressive Farmer's America's Best Young Farmers and Ranchers. They are among the best of their generation. They embrace the future of agriculture and are developing the technical and managerial skills to build their own successful businesses. To see videos of all the winners, please go to http://bit.ly/…. 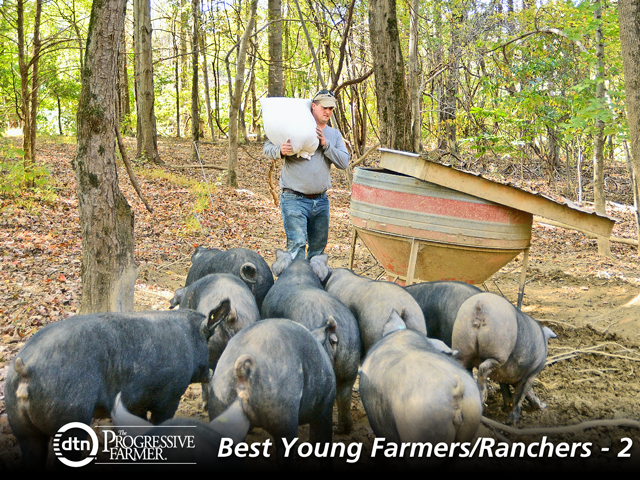