WEST POINT, Neb. (DTN) -- Whiskey is in, and at one Nebraska farm riding that wave, the spirit has never been more personal.

The big distillers have managed rapid expansion in recent years, and small-batch operations are springing up the way breweries did in previous decades. American whiskey production more than doubled from 2002 to 2019, and like anything else in this time in America, there's a special place in that market for custom producers, for the farm-to-table ethos.

Farm to glass may be nice, but how about your farm to your glass?

That's the idea driving the crew at Flyover Whiskey, a distiller on a farm outside West Point, Nebraska.

You'd be forgiven for driving right by Flyover, passing it up for any other farm, and indeed crop production and cattle are a lot of what keep the small staff busy on a day-to-day basis. But tucked in one long, white building isn't livestock, feed or half-finished projects that occupy many old farm structures. This one's brimming with stills and glass bottles, with buckets fermenting alcohol and corn-swollen United States Postal Service packages. The whole place is practically overflowing with one of the more novel on-farm side businesses going.

What sets Flyover apart is it doesn't promise to produce locally sourced custom whiskey. Instead, it strives to take your corn and produce your whiskey. Mail them 15 to 20 pounds of your corn, and they'll return six bottles of whiskey.

Flyover Whiskey is owned by Joe and Curtis Knobbe. Devon Birchem runs the distilling on the Knobbe farm in northeast Nebraska, and Kylie Kai does graphic design for the bottle labels. The company was started as more of a hobby than a calling by a University of Nebraska friend to Joe Knobbe. And when that friend decided to go back to grad school, Joe swooped in to buy out the brand and equipment.

Both Knobbe and Birchem had long seen a potential business serving customers with small-batch custom farm products. Birchem raises chickens and bees to that end. Knobbe thought his avenue might be beef, selling steaks, but whiskey fit his vision even better, and the "mail them your corn" bit gave Flyover a unique angle.

"We all have that in us a little bit. When you come back to the farm, you want to sell something and make a name for yourself, but corn farmers and row crop farmers don't really have that opportunity," Knobbe said. "You can't just sell it to anyone. It's not a finished product. With cattle, you can take it to the butcher and sell steaks or give meat to family. There really wasn't anything like that for corn farmers, so this is that outlet."

The partnership is among lifelong best friends. Joe Knobbe and Birchem live 2 miles apart, and Kai grew up 5 miles away. They all attended high school together in West Point, then branched out at the University of Nebraska in Lincoln before eventually returning to their dirt road roots.

Birchem is the lead distiller and has been working with the whiskey recipe that came with the company's purchase. He's been slowly tweaking the process in the two years he's been on the project, both to improve taste and increase efficiency. He's always wary, though. Mistakes are bad at any job, but they could carry unique consequences at this one.

"You can't mess up," he said. "If the batch doesn't taste good, it's not like we can rerun this. They only gave us so much of their corn. It's not unusual for them to tell us this was the last bit of corn they had, or this is the corn from grandpa's last harvest. You don't want to call and ask for more corn. Everything's so personalized there's not any margin for error."

Keeping corn matched to customer is a detail-orientated process the crew takes seriously, labeling equipment throughout their facility to ensure the right corn goes into the right bottles.

But how much does that really matter? Would anyone be able to tell the difference if the corn came from grandpa's last field or a field next to the Knobbe farm?

Birchem said he certainly can taste it.

"Every batch is different in its own way. We get dried sweet corn, white corn, Indian corn and yellow corn. We've done a lot of popcorn whiskey. White corn is sweeter, so the whiskey is, too," he said. "There are subtle differences, maybe in the soil or in the hybrid. A drought year, you're going to have a different test weight, and that's going to affect your yield and the taste. The flavor is in there, and it's more condensed, so you'll get more flavor."

Flyover's advice to get the best whiskey is to send corn harvested wet and dried down and, perhaps most importantly, to make sure it's clean.

But the goal isn't exactly to make an elite whiskey that might win a taste test at a big event. The company's spirits aren't aged for decades in barrels, for instance. The process of producing a batch takes about eight weeks, two weeks fermenting then another six or so aging.

"People want to be proud of it. They want to share it," Knobbe said. "So, we have to make it smooth. It's not going to be the same as a 10-year-old bourbon, right? We can't do that in such a short amount of time. But we can make it smooth, we can make it a nice thing you can share, a great drinking experience. That's what we've tried to do."

The personalization doesn't stop at the taste. Each bottle gets a custom designed label.

Knobbe started doing the graphic design himself, requesting a photo or logo from each farm that sent in corn. Often that would end up being a blurry cellphone picture of a design on a hat instead of a clean PDF, however, and he brought in Kai to professionalize the product.

Flyover can take logos, photos or even just words to put on to a custom label. The labels do mostly stick to the same format, but each one is unique, and they come with plenty of requests from customers.

"I get a lot of photos of harvest, or of grandpa in the combine," said Kai. "We get a lot of aerial shots and a lot of logos. A lot of the logos come off the feedlot sign, or the hat, or the Yeti, so those can take a lot of time."

Some customers stick to the basics and others want to pack in the details, such as the date of the harvest, the field where the corn is from and even the hybrid.

"There are some that are going to take you longer," Kai said, "but those often mean more than the others."

It all comes back to that personal touch. The Knobbe farm is still active, and Knobbe and Birchem spend much of their days helping out away from the whiskey. Flyover is still only a part of what they do, a side business that has swept them up, but a side business still.

It's catching on, however, and the orders are piling up. A six-pack of 750 mL bottles of Flyover's custom whiskey costs $350. Liquor laws only allow them to mail finished product back to Nebraska or North Dakota, but they'll take corn from anywhere and produce whiskey from it and are willing to work with customers for either in-person pick-up or delivery some other way.

Offering something so unique and personal, they don't expect business to slow down any time soon. 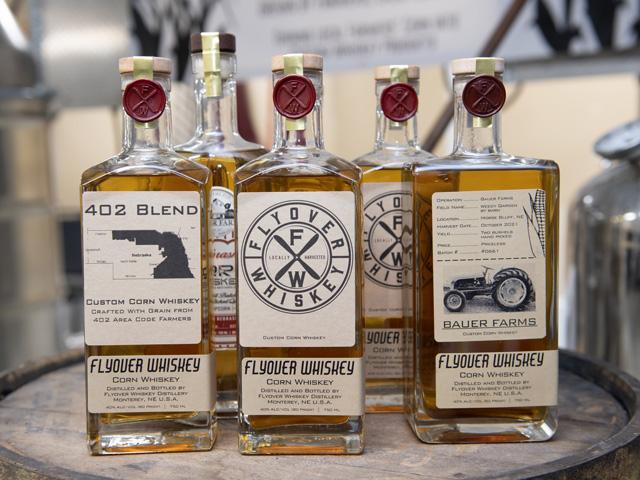