DECATUR, Ill. (DTN) -- One thing leads to another as the '80s rock band Fixx famously sang and Marc Arnusch can confirm that the refrain is nearly always true in farming.

This week the Colorado farmer was back to irrigating his crop as drought once again started creeping back onto the radar. At farm headquarters, crews began tearing down an old office that has been replaced by new. Some puzzling results on crop tissue tests were causing a bit of head-scratching and consultations with trusted advisers. And, he was beginning to gear up for a smooth and safe wheat harvest.

Whew. It's just a normal week around the farm.

Ohio farmer Luke Garrabrant was also meeting himself coming and going this past week. Mown hay is almost always a harbinger of rain and he battled it start to finish with equipment snafus adding to the excitement. He also managed to sneak the last soybeans into the ground -- far beyond the calendar date he prefers, but with the satisfaction of finally being 100% planted.

Garrabrant, who farms near Johnstown, Ohio, and Arnusch, who farms near Keenesburg, Colorado, are participating in DTN's View From the Cab series. Each week they report on crop conditions and other agricultural topics.

This week the two farmers touch on the topic of safety and how important being prepared has become in their operations.

"I'm not sure who I made mad in a previous life, but somebody is coming after me for revenge," joked Luke Garrabrant, when he reported in on Thursday, June 23.

With weather bearing down on him, Garrabrant was hustling to bale hay when the conveyor chain on the bale accumulator broke into pieces and was beyond repair. It meant 4000 of the 5600 small bales he made last week had to be dropped on the ground to be retrieved later.

The good news is the hay yield was great. "Hay quality wasn't ideal, but it wasn't bad given the late cutting," Garrabrant noted. He does custom baling for a horse farm. Hay from his own farmland is typically sold into the horse hay market, as well.

As land dried out from frequent rains, Garrabrant made the decision to switch remaining acres to soybeans and drilled the final seeds this week. He will have no prevented planting acres this year.

The most recent USDA-NASS Crop Progress Report for Ohio showed most of the Ohio crop planted and emerged. On June 21, corn crop condition was rated 47% good and 11% excellent. Soybeans showed a 47% good and 9% excellent rating.

"Still, you can tell where it was stressed," Garrabrant reported. "Some corn is showing some nitrogen deficiency.

"Even the soybeans that were planted timely seem behind this year," he added. "The crop seems uneven. There just aren't a lot of crops that you drive by and get wowed. Everything just seems a little off here," he added.

After spending so much time wishing rain would stop, it seems ironic that the crop is now bordering on needing a drink. "We're about a week out from having some wheat ready to cut, which is fairly early for us," Garrabrant said. "I'm hoping we get a rain before we get in the middle of that."

"I think there's value in getting some rest and a shower and just getting cleaned up to start with a fresh outlook every day," he said. "I'm not sure I've been getting enough of those needed breaks of late."

He knows fatigue can be a safety issue, as well. Moving equipment in his increasingly urban area is getting to be a real concern. Lack of patience on the part of drivers is a worry and he's to the point of wondering if dash cams might be necessary as drivers become increasingly bold in their driving behaviors.

Watching the clock can help with traffic. "It's always nice to move those heavily traveled roads when others don't. We especially watch school areas when kids are in session and try not to move when they might be going or coming," he said.

Children are definitely on his mind these days in other ways, too. As his daughter approaches age 2, he knows her mobility will increase. That has him looking down the road to build a barn/shop. "I don't currently have a farmyard and tend to do repairs here and there.

"I want her to be able to hang out and learn from what I'm doing. But I'm also thinking hard of how I can do that and keep it separate from the home place," he said.

Arnusch Farms has a personal stake in farm safety. In 2019, the farm's manager, Casey Cantwell, was pinched in a forklift. He recovered with medical attention and physical therapy, but it opened Marc Arnusch's eyes to evaluating the farm for dangers and creating plans for preparedness.

Today, Cantwell is the farm's safety coordinator, and each month he leads a detailed discussion on safety during staff meetings. Arnusch also adds a brief comment on the topic as the farm staff meets each morning that reflects on duties about what is happening for that day.

For example, this week they reviewed safety measures regarding irrigation water, electricity and how to approach the sprinkler system.

"During these really high temperatures we remind everyone about heat stress and staying hydrated and protecting skin, eyes, etc. We talk about things as simple as what to do and where to go if someone has a bee sting," he said.

As of a few months ago, everyone on the farm is now trained in CPR and first aid -- a program they were able to do through the local fire department. The main headquarters and all motorized vehicles contain first aid kits.

"It is Casey that has really picked up the baton and become a champion for all kinds of safety considerations. It means so much coming from him and all the employees have really embraced it and taken it to heart," Arnusch said.

The farm also donated a grain rescue tube to the local fire department. "I hope they never, ever have a need to use it," he said. "But it is there if needed.

"We know we can't remove every risk, but we are trying hard to take precautions," Arnusch added.

Those warnings about dealing with irrigation were coming in handy this week as water began flowing to corn. "We are also irrigating the last time on the wheat. We think the last time on barley, and the second time on alfalfa. So, we're hoping to cover a lot of acres and a short period of time and keep the crop growing," Arnusch said.

The 100-to-102 degree temperatures that set in last week have thankfully started to temper to highs around 90. "That comes at a great time for winter wheat and spring-planted barley as it finishes up grain fill," he added.

A fungicide application has already been applied to barley as a preventative measure to head off smuts that can set in. "But right now, we feel really good about this barley crop," he said.

They were noticing a few quirky things during scouting this week though. Corn is at least two leaf collars behind in growth compared to where it typically runs after accumulating 350 to 450 growing degree days when they compare to past performance.

And, tissue tests were showing higher nitrogen levels in the plant beyond what was showing up in soil tests. "We typically like to have 65 lb. of nitrogen available at V4 to V5 and we're up around 170 lb. of nitrogen and we've done nothing different.

"Maybe it is just that everything we're doing is just beginning to come together. That's what it is all about -- we keep asking whys and try to keep learning," he said. 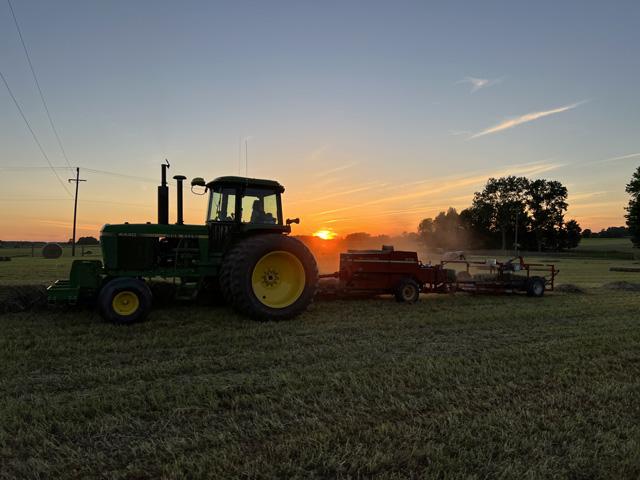