By contrast, Colorado farmer Marc Arnusch would be thrilled to get a gift of some rainfall on his Keenesburg farm.

The haves and have-nots of water have been a constant refrain this season as the two farmers report in each week as part of DTN's View From the Cab project. Wild weather continues to dominate thoughts in this eighth installment of the diary-like feature that examines crop production and other aspects of farming.

"We're so wet the toads are running for cover," Garrabrant said. In the arid west, Arnusch admits he is always one step away from drought, but this year, the dry set up early.

He will need some patience. DTN Ag Meteorologist John Baranick isn't ruling out possibilities of rainfall in Keenesburg through this coming weekend and early next week. "A trough in the West is drawing a lot of moisture into the Rockies off to the west. It is hard for thunderstorms that form in the mountains to move into the Plains before drying up. There may be some showers at times, but they are likely to be light. Temperatures are likely to be very high in the upper 80s and lower 90s overall. But if the showers occur, daytime highs could be a little cooler each day," Baranick said.

In Johnstown, it should be quieter for the coming week. Weather over the weekend is cooler than the extreme heat the area had this week, but temperatures will be on the rise next week and back into the 90s with high humidity. That combination may bring in some isolated showers mid to late next week, but those should be spotty and could easily end up missing the area, Baranick added.

While the climate these farmers endure might vary and age puts the two men in different stages of their careers, both share the fact that they are fathers and sons of farming fathers. This week they follow their crop report with a discussion of the blessings and challenges of farming with Dad.

It is in Marc Arnusch's nature to cultivate optimism. But it's hard to remain cool when temperatures are breaking 100 degrees Fahrenheit.

"The storm we had two weeks ago recharged some of the soil moisture profile, and we're still getting fairly cool at night, which is allowing respiration to take place normally. So, we're doing OK. But I'd feel better if we could get a shower," Arnusch admitted.

Wheat is in early grain fill, and barley is flowering heavily. Corn is around V-3 to V-4, and the milo is beginning to emerge. The farm was able to take a first cutting of alfalfa this week.

Alfalfa is harvested as green chop with an arrangement with a local dairy. It's typically cut and allowed to cure several hours before the dairy comes to harvest. Tonnage is the goal with the current commodity market, Arnusch noted. "This time they allowed it to go to almost full bloom, and they aren't discounting for that. That tells me they'll take whatever they can blow into a truck right now."

Hay holds more than a hint of nostalgia for Arnusch. His father, Hans, has always favored the saying: "The world is like a haystack. Those who go to the haystack and pull something out, have something. Those who stand back and look at the haystack, have nothing."

In other words, "You make your own luck." Arnusch isn't sure he always appreciated this axiom as much as he does today.

"Dad taught me how to put callouses on my hands. Hard work never goes out of style, and he really pressed on me the importance of doing a job right," he said.

After surviving the farm financial crisis of the '80s, Arnusch's father wasn't all that eager for his son to farm and encouraged him to find another profession. Still, Arnusch said it is unlikely that he'd be farming today without his father's influence.

"I had uncles who were farmers, and my father-in-law farmed. However, it would have been difficult to borrow machinery, rent land, share equipment and have labor for harvest without Dad's help.

"His reputation was a door-opener for me as well, and I was able to rent farms as a young farmer that most people would not have been able to rent at that age -- all because people knew him as hard-working, honest and a great farmer," he said.

Arnusch hasn't actively farmed with his father since 2014, but they still talk about how the crops are faring and occasionally compare notes. Arnusch said he's come to understand that the open "pull no punches" communication style that they have shared over the years has been healthier than covering feelings.

"I'm not sure there's anything I haven't said to my Dad: good or bad. I'm incredibly proud to call him my father, and I work hard to continue his legacy of hard work and determination," he said.

"However, our definition of winning looks different. He says he is not the risk taker I am, but I disagree. I try to take risk off the table with analysis and numbers, while he based many of his business decisions on gut feel. We were both successful. The definition of success just looks different to each of us," he said.

At 49, the son is now a father with a son in the farm business. The changes in this farming era are coming fast, and Arnusch often examines his own management style when his son, Brett, puts ideas forth and tries to carve his own influence.

"I still become frustrated with the drive of my own son. Sometimes his priorities feel out of place. But I'm reminded of the conflicts I had with my own dad, and with the help of a business coach, I've discovered people get better when leaders become better," he said. "I will always be in a leadership role as a father. It's my obligation and a pleasure that I have the luxury of being that person."

That doesn't mean that they don't have challenging and sometimes heated conversations. "What we know -- or what we keep in mind -- is that we're not arguing with that person. We're arguing about the issue," he added. "In the end, sometimes we have to realize that we will never agree but find ways to do it respectfully."

When the rain days start to overwhelm, Luke Garrabrant grabs his soon-to-be-2-year-old daughter's hand, and they go in search of a puddle. Gracen can always find a way to make the clouds lift.

Garrabrant knew mowing hay this week might be a mistake, but when you get a break in the weather this year, you take it. The hay was freshly mown when the rains came, so he's not terribly worried about leaf loss if he can get enough drying before another dousing. He'll run the mown hay through the tedder to fluff, then rake it, and barring any more rain, bale this weekend.

In a last-minute decision, Garrabrant geared up to plant a bit more corn this past week too, but another 2 inches of rain on that field shut down operations. "I'm still trying to get more soybeans planted, but if we get much more rain, it will likely be over. I'm still battling and not totally writing beans off yet," he said.

Some crops are starting to show the stress of too much water, he noted. Some corn has taken on that sickly yellow look and looks stunted. "We'll start testing in some of those areas to see about nitrogen needs," he said.

Some soybeans are starting to need post-emergence herbicides applied. He watches temperatures carefully because herbicides and hot weather don't always mesh well. "I'm not having to call off spraying for hot weather as much as I am that we're just too wet to get out there," he said.

While Garrabrant's farms have mostly avoided storm damage, winds and a possible tornado had caused property damage in the vicinity, and power outages were being reported this week.

With his birthday and Father's Day all in the same week, Garrabrant figures he has plenty of reason to celebrate, despite the soggy season. At 26, he's continuing to build his farming operation, while juggling custom manure spreading and crop input spraying businesses.

He farmed with his father, Tom, after college before deciding to strike out on a path of independence. His father is one of his custom application customers, and they still lend each other a hand when needed.

But Garrabrant will be the first to say that he hasn't always followed his father's advice. "The thing I can hear him saying is: 'You have to walk before you can run.' I'm not sure how well I've done at that," he said.

Family and communication are two words that he struggles to put together in the same sentence. "I've learned so much about farming from watching Dad -- either how he does things or doesn't do things.

"But we aren't good about talking about things," he admitted.

Garrabrant can't remember when he didn't plan to be a farmer. Even at age 7, he knew farming was his chosen path. He also knows that he purposefully chose the profession and to branch out to begin his own farming and associated businesses. Still, he does sometimes wonder if he missed a chance to be more well-rounded by being involved in non-farm school activities.

Those thoughts come up more now that he's a father himself. He can already see Gracen drawn to the outdoor life, even as a toddler. "I'm trusting that my wife, Paige, will help us keep a balance in that department," he said. "I think I would like to see Gracen involved in agriculture, but mostly I want to support her interests and enjoy whatever that path is that she chooses.

Workplace drama can occur whether you are working with family or not. But they often seem more surprising when working with those you love.

ALL IN THE FAMILY

Arnusch, who is a generation ahead of Garrabrant in experiences, said that he believes working with family is hard because the related workers often have the same mannerisms or habits and think they know each other's expectations. "Rather than confirming those assumptions, we sometimes become competitors.

"We inherently compete for attention, for gamesmanship, and to prove that we are as capable as our predecessors. We also know that our loved ones are those who will forgive us and therefore can be more demanding and abrasive in confrontations. At the same time, we don't want to let them down," he said.

At the end of the day, Arnusch said he tries to keep in mind that it isn't the tractor lineup, or the land, or how good the crop looks or the health of the balance sheet or winning the approval of others that matters. "Success is the time with family as we achieve what we set out to accomplish.

"When we keep that thought in focus, we do remarkable things. A mentor once told me, 'Don't worry about climbing a ladder, so long as you are taking the right people with you," he said. 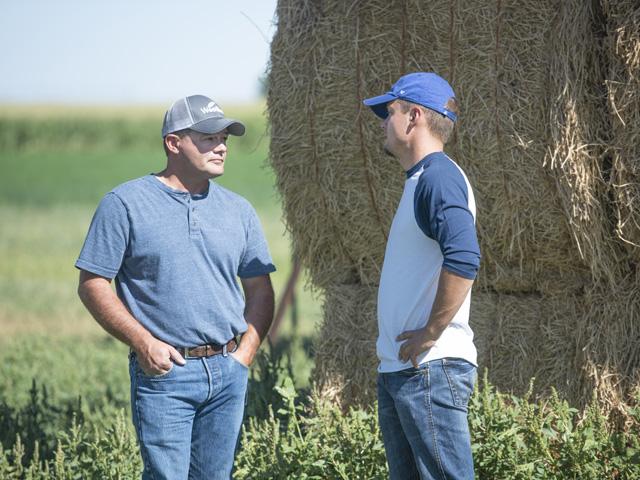