DECATUR, Ill. (DTN) -- The winds have been howling ominous warnings across Colorado's Prospect Valley this spring. Marc Arnusch, who farms with his family near Keenesburg, has already destroyed some fields of drought-withered winter wheat and barley. Last week, gale-force winds toppled the tower that transmits global positioning information to the tech-savvy farm.

Arnusch is quick to tell those unfamiliar with western agriculture that drought is always around every corner even in the best of years. Access to water seeps into nearly every discussion and decision here. Still, it has been several decades since the weather pattern has been this dry and this dire in his area, he said.

DTN readers will learn a lot about western agriculture and how Arnusch Farms adapts to challenges and embraces change during the coming months. Each season, two farmers are chosen from a list of volunteers to report on crop conditions and the many aspects of farm life through the feature called View From the Cab.

Also providing reports throughout the 2022 growing season will be Luke Garrabrant, who farms near Johnstown, Ohio, about 35 minutes southeast of Columbus. Watch for the profile on his farm next week to learn more about how this young farmer has built a business that includes row crops, beef cattle and a custom spraying and fertilizer business.

While wild weather might be top of mind this spring, the diary-like feature promises to be filled with innovative thoughts as our two farmers face chaotic crop, input and land prices.

Hop aboard for a view from Weld County, Colorado -- the largest agricultural county in the state and No. 8 in value of total agricultural products sold in the U.S., according to the latest Census of Agriculture.

Arnusch Farms sits on the rim of the Prospect Valley about 45 minutes east of Denver. Marc's grandparents, Andreas and Katharina Arnusch, emigrated here from war-torn Austria in the early 1950s. Sugar beets were the mainstay crop in those days.

Today, the mostly irrigated 2,200-acre row-crop farm specializes in producing certified seed wheat, certified seed barley and grains for the craft beer and spirits industry. Nighttime temperatures are 3 to 5 degrees Fahrenheit cooler in the valley than surrounding areas -- an environment that favors growing these specialty grains for a higher-value proposition.

Remaining acres are typically devoted to feed ingredients such as silage, grain corn and dairy-quality alfalfa. This year, grain sorghum will be substituted for corn in hopes of finding a more water-sipping alternative to the current severe drought situation. It will be the first time the farm has grown milo.

A look back at the farm's performance in the National Wheat Yield Contest offers some perspective as to how dry conditions have become. Arnusch said 2021 dryland yields came in at a "devastating 20 bushel per acre (bpa)." Only one year earlier, the farm recorded contest entries of 79.6 bpa in the dryland winter wheat category and 161.8 bpa irrigated. In 2019, Arnusch Farms took honors for their 210.52 bpa entry in the irrigated winter wheat category, the second-highest overall yield recorded in the contest that year. Their winter dryland wheat entry topped the state contest at 120.9 bpa in 2019.

Because of the severe drought situation, surface water allocations this year have been reduced by 50%. Arnusch said the farm is re-evaluating crop rotations and perhaps even returning some non-irrigated land back to fallow.

Flood irrigation is popular in this area but requires more tillage than Arnusch is comfortable with and leaves the land vulnerable to eroding winds. He said the farm is attempting to move to more precise practices such as overhead sprinklers and strip-tillage, but converting to new practices is often dependent upon landlords and lease arrangements.

"We are constantly analyzing and changing practices, and it all has to do with getting the most out of every drop of water," Arnusch said.

"Water touches everything in Colorado. In Prospect Valley, we sit on an aquifer with a water table that has been mostly static for over 50 years. It is a great water source because it has been replenishable, reliable and consistent. However, that fact is both a blessing and a curse.

"Because we are so close to the Denver metropolitan area, we now find ourselves competing for water in our own community," he noted. The rush to secure water rights is driving the price of land upward, making it more difficult for the next generation to move into this space, he added.

Arnusch can be out his farmhouse door and in downtown Denver within 40 minutes, but he said the area is unique in that it is still small enough to be rural. "When I sit out on my deck or when I'm setting water late in the evening, I can't see a neighbor for at least one-half mile.

"We are still in an environment where we can move equipment around without much trouble. We don't have neighbors asking us what we are doing in the field. But we also know that time is coming. We know more change is coming, and we are working to embrace it," he said.

That proximity to urban life also benefits Arnusch Farms. "We have some of the best markets in all of the state of Colorado," he said. "Currently, we have an 85-cent positive basis on corn. We're only about 40 cents under the Board on Kansas City wheat.

While Arnusch is only 48 years old, he feels strongly about onboarding the next generation of family farmers and grooming them early in leadership roles.

His wife, Jill, oversees the farm office -- taking care of the bookkeeping and tracking farm compliance and documentation. "We work so well together as a team. And she is really the glue that holds us all together," he noted.

Their son, Brett, came back to the farm after college in a role they define as "data comprehension." His role has been to understand what goes into each acre and eek more profit from it.

Brett was recognized as one of DTN's America's Best Young Farmers and Ranchers in 2020. See his profile here: https://spotlights.dtnpf.com/….

Implementing things like soil moisture probes and new accounting software is part of Brett's job. But his influence can also be seen on how they have turned the table on sales by thinking about the end-user first and working backward to satisfy the market for a commodity.

When Arnusch came back to the farm in the early 1990s, his father was still reeling from the farm crisis. "He was fine financially, but it was like he had PTSD. He wanted something better for me than farming," he recalled.

But the yearning to farm had been there since he was a toddler. When a farming grandfather experienced some health issues, it opened a field of opportunity. "I begged, borrowed and practically stole farm equipment to get started farming," he said. "Dad said that was the best way because I was able to experience my own victories."

Those experiences have shaped some of his own philosophies on how Brett enters the family business. This past year, Brett purchased a piece of farmland once farmed by his grandfather. "Our goal with Brett is to not only get him integrated into his own farm but to also incorporate him into the family business early enough so he can benefit from what we've learned," Arnusch said.

In addition, a key employee, Casey Cantwell, who is married to Arnusch's niece, Taylorann, the farm's office manager, approached the farm seeking an opportunity to start a farming operation of their own. Arnusch Farms is helping them toward that dream by subletting a farm owned by an absentee landowner.

"We've concentrated on growing the operation using value to drive profits rather than volume. To accommodate these new partners, we may eventually need to increase farm size. What that looks like is still being discussed," he said.

What Arnusch hopes readers take away from his participation in this project is a better understanding of the arid West. "I hope we can draw some attention to and begin to wrap our heads around water scarcity.

"I hear a lot about the need for water quality these days. But you can't begin a conversation in Colorado about water quality if you don't have water," he said.

"Farmers here are very open to innovation and change. We are diverse, unique, transparent and intentionally strategic. Combine those qualities with the challenges of farming in the plains of eastern Colorado, and I think we have an interesting story to tell." 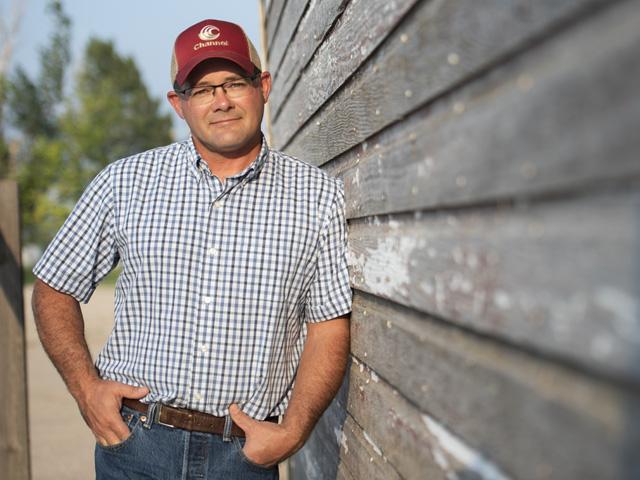