STEAMBOAT SPRINGS, Colo. (DTN) -- It is a long way from the plains of western Kansas to the 2022 Winter Olympics in Beijing, China. Nevertheless, one Kansas-ranching rooted, sliding United States athlete has a chance at a medal at the Beijing Olympics on Saturday.

Katie Uhlaender competed Friday in the first two runs of the women's skeleton event. She was ninth after the first run in the 25-racer event, then jumped a spot to eighth after the second. She said Friday a medal is still within reach in her last two runs, which will take place Saturday evening in China.

Skeleton is a sliding sport similar to luge, except racers fly down the track face forward. She reached 79.47 miles per hour during her first two runs, the second-fastest speed of any competitor, all of it with her face an inch off the ice.

Uhlaender's ranching roots come from her father, Ted, a former Major League Baseball player who retired to the tiny western Kansas town of McDonald, population 113, where he bought a ranch. It passed down to Katie after his death in 2009. She took over operations and raised everything from cattle to corn, wheat to pinto beans.

"The one thing I love about the farm community and Kansas, in general, is that they never give up," Uhlaender said in an interview with the Topeka Capital Journal in 2018. "I am proud to call myself a Kansans for those reasons."

Beijing marks her fifth Olympics. In fact, she's competed in the sport of skeleton in every Olympics it's been offered since being reestablished to the schedule at the 2002 Salt Lake City Olympics.

That pursuit has taken her around the world, to Turin, Italy, in 2006; Vancouver, British Columbia, Canada, in 2010; Sochi, Russia, in 2014 and Pyeongchang, South Korea, in 2018, not to mention dozens of stops for elite competitions in between.

In addition to that, she worked as a camera operator for the CBS reality show Survivor and spent part of the pandemic working as a tree arborist.

Life as a rancher and farmer somehow fits in there as well.

"That community goes hard," she said in an interview with a Kansas TV station. "Ranchers, farmers of America know what it's like to get up, work day-in, day-out, put everything they have into what they're doing."

Uhlaender is certainly putting everything she has into her fifth run at an Olympic medal.

She just missed out on bronze at the 2014 Winter Olympics in Sochi, Russia, and the frustration there still lingers.

She was fourth but prompted to third and the bronze medal when one of the finishers in front of her was entangled in the Russian doping scandal at those games and subsequently disqualified.

That decision was later reversed, and so was Uhlaender's bronze medal.

She may still have a shot, however.

After the first two runs in the four-run competition, she is 0.53 second behind the leader, Jaclyn Narracott of Australia.

That gold medal position is probably not attainable in just two more runs, but she's 0.30 second behind Germany's Tina Hermann, currently in the bronze medal spot, a time gap Uhlaender described as "doable."

In an interview with the Washington Post, she explained how she's still bringing some of her ranching heritage to the ice in Beijing.

Her father's best friend in Kansas was Gilbert, who would "roll in and be drinking his peach brandy and asking if we wanted to go shoot gophers at, like, 95," she told the post. "He was classic, and he was a huge supporter of mine."

He died last year, but to honor him, she named her sled after him.

Katie and Gilbert will try to slide for a medal starting at 6:20 a.m. CST Saturday morning. 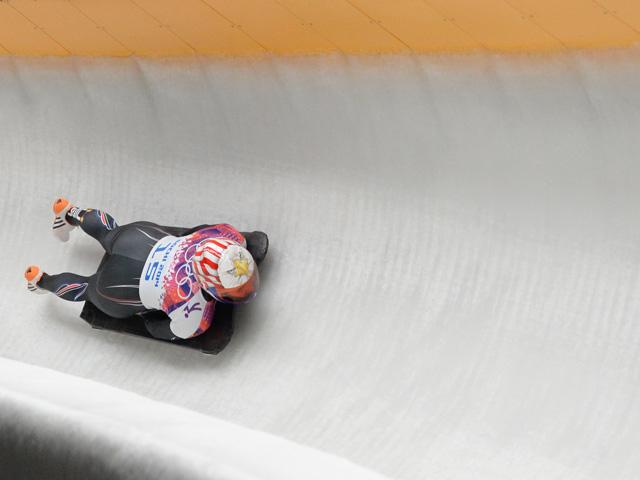