When nonstop rains set in, most farmers worry about fungus and mold infecting their crops. Not Ancil Jacques. Fungus is his crop. After it rains, he takes to the woods in search of high-dollar finds like truffles and chanterelles.

While this Reidsville, Georgia, entrepreneur spends hours every week foraging wild mushrooms, he doesn't leave his business to chance. Jacques has slowly built a cultivated side to his operation, allowing him to consistently supply high-end chefs with delicacies like lion's mane and pink oyster mushrooms.

The 33-year-old says his parents, both science teachers, unwittingly set him on his unique path. "They didn't know much about mushrooms, but we spent a lot of time walking through the woods and reading field guides," he says. Jacques laughs how he had heard about truffles but had never seen them in the field. One day after spending five or six frustrating hours in a pecan grove looking for the illusive fungi, which grows underground, he finally hit pay dirt.

"They are really stinky, but chefs love them. They do things like shave them and put them in pasta," he says. Stinky or not, Tuber lyonii fetches up to $500 a pound. "It started dawning on me there was no reason to be a mushroom nerd and not make a living at it."

Turning a passion into a viable business can be tough. While his wife, Sarah, had steady income as a middle school science teacher, Jacques spent every waking minute foraging for mushrooms or building his grow operation, Swampy Appleseed Mushrooms.

The cultivated business is almost all do-it-yourself by necessity. Jacques has had to learn skills like wiring, metal work and refrigeration. "I've saved thousands and thousands of dollars doing things myself," he says. "If I bought equipment new, I'd need $50,000 to $60,000 now to start up."

His DIY skills allowed him to buy two discounted shipping containers with nonworkng refrigeration units and repair them. His inoculation station is a self-built HEPA unit with some $400 in parts.

One piece of equipment he did buy new was a ribbon mixer. "I was mixing 600 pounds of mulch by hand twice a day. If anything ever happens to my wife, I'm marrying this ribbon mixer," Jacques laughs.

That purchase by no means put an end to sweaty, gnat-filled days. When he buys hardwood shavings, it's a bonus when the mill will load his 2010 GMC pickup truck. If they don't, he shovels the shavings into the truck, and when he gets home, he shovels them again.

"I never knew hard work until I started growing mushrooms," Jacques says. Although he is willing to pay well for hired labor, like others, he struggles to find it.

While mushrooms pop up like, well, mushrooms anywhere from your yard to a hay bale, cultivating desired varieties is painstaking.

Jacques begins the process mixing hardwood shavings, grain hulls (usually rice, soybean or oats) and water. His goal is 250-gallon-sized bags of the mix weekly. He pasteurizes the bags in hot water. After cooling, the bags go into the shipping container that houses his homemade HEPA unit. Here, the bags are inoculated with mycelium, the vegetative part of the mushroom. Then, the bags are sealed and stay in the inoculation room two or three weeks while the mycelium multiplies.

By the time the bags are ready to go into the grow room, they are covered in a white, cobweb-looking substance. Once in the grow room, Jacques cuts a hole in the top, allowing the mycelium to grow the actual mushroom. That process takes four weeks or so.

"I can usually get two cycles out of a bag and a pound of mushrooms," he says. Jacques knows the process, but he's the first to admit it's not a sure thing.

"Things can go wrong just like they can go right," he says, adding there is a lot of trial and error in mushroom production. Good, current production information is hard to find, and other growers are often not willing to share tips because of the highly competitive business.

Every mushroom producer knows that pathogens are the primary threat to using indoor grow rooms to cultivate this delicacy.

"Mushrooms are susceptible to disease pathogens, and other fungi feed on them," Pennsylvania State University plant pathologist John Pecchia explains.

Jacques combats that threat by spending hours cleaning the shelves, walls and floors of his inoculation and grow rooms as a preventative measure against pathogens. He also makes sure the air-conditioner and water filters are spotless.

Take out all the possible problems, and when things go right, Jacques has around 200 pounds of mushrooms a week to sell. These usually include oyster mushrooms, chestnut mushrooms and lion's mane.

He says his favorite place to sell mushrooms is Georgia's Forsyth Farmers' Market, in Savannah, which are held each Saturday. His mushrooms are a crowd favorite.

"I sold 92 pounds of mushrooms last Saturday," he said in an interview earlier this fall. "We sell to everybody from super ritzy foodies to people who pay with EBT cards." On a typical Saturday, Jacques says the booming farmers' market draws 1,200 to 1,500 visitors.

The specialty grower has also developed a following with chefs such as Christopher Hathcock, executive chef at Savannah's famed Husk restaurant.

"Whenever Ancil has anything to sell, it is pristine," Hathcock says. "Whether he forages or grows it, there are no blemishes. I scoop it all up." 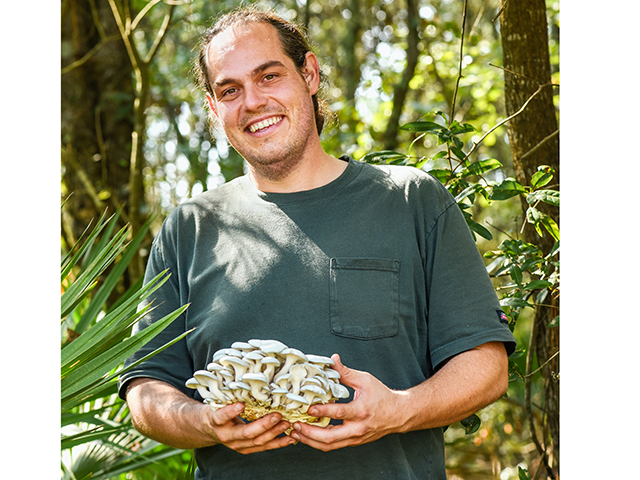