Because of COVID-19 regulations, I was unable to go back to Canada to visit Dad in person during the more than a year he was hospitalized and then lived in a regional care center.

He ended up more than an hour away from the farm near the Battlefords in northwest Saskatchewan right before Easter in 2020, just as the coronavirus continued its relentless spread and the world began to shut down.

Border restrictions on essential/non-essential travel, long quarantine periods over crossing the border, no or limited access to visit patients in medical facilities, multiple COVID tests needed on either side of the border, and other pandemic rules made me soon realize I would never see him again.

Instead, I tried to phone Dad every day -- some days for five minutes, some days it was 45 minutes. Sometimes he'd talk about the past; I'd gently encourage him to share more memories, everything from describing his one-room schoolhouse to what it was like to go fishing with his best friend. I scribbled several black-and-white composition notebooks full with Dad's every word, every anecdote and every memory he decided to share of living nine decades on the Canadian Prairies.

Each of those minutes on the phone are deeply treasured, even during the really tough calls as his health deteriorated.

"How are you so strong?" he asked during one of the calls.

Meanwhile, I thought about all the decades of my life that I saw my father as the strongest man I know. He farmed until 89 years of age. In his late 80s, he could still toss heavy hay bales, chop away trees the wind blew down on bush trails we needed to drive, fix sharp barbed-wire fences, and bang new posts into dry stubborn ground. He took care of cattle that in summer eagerly ran to his green half-ton truck they knew had a new salt-block in the back; in winter, they raced to him as soon as they heard the rattle of grain pails Dad carried to them through howling, cold winds.

I watched Dad swath hay and haul bales for hours through hot summer days, operate big combines past midnight on chilly fall nights, shift gears on grain trucks and carefully maneuver a load of grain as he drove up and down steep stubbled hills and narrow dirt roads.

When heavy morning dew kept combines from moving, Dad would sweep out grain bins in clouds of thick, itchy dust. He was ready and eager for grain trucks to roll again.

Dad would be outside from very early each morning until late at night, long after the sun had set and Northern Lights danced over our barn and fields.

He would chuckle and tell us later about the foxes, deer, moose, even the bears he occasionally saw while he was out in the fields. The same fields he sometimes walked late at night by the light of a moon to get from one piece of machinery to another.

"How have YOU been so strong for so long?" are the words I silently asked.

Until the last year, Dad never really talked much on phones.

He was always busy and believed the farm phone should only be for business calls -- short and for a purpose. Find out when the grain truck will arrive. Check what an elevator will pay for grain. Order some diesel to be delivered from the local co-op. Hunt down who has a part for that broken tractor.

There were once-a-year holiday calls to some relatives. Sometimes he and I would go months without talking to each other on the phone.

Each of our daily phone calls in the last year ended with "I love you." We said those words to each other more this final year of his life than we ever said before in the rest of our lives put together.

The calls were by phone, not video; that was our only option.

Each call, I would try to imagine Dad in his room, that perpetual farmer's tan on his face and neck, looking out the window as he described to me what he saw of the outside world.

He noted the seasons as they passed. Even as his eyesight failed and he couldn't read anymore, he still saw enough to share with me what I was missing from 1,165 miles away.

The grass turning green and new leaves appearing. A tractor working in a distant field with dust and seagulls rising behind it. Cautious does bringing their fawns to graze on the lawn. A deep blue thunderstorm rolling in with lightning flashing across the sky. Busy grain semis rushing harvested grain to the nearby elevators. Autumn's golden leaves swirling and falling to the ground. V-shaped lines of migrating geese overhead, with some settling in for the night on a nearby pond. The rising steam from a distant power plant showing wind direction and revealing how cold it was outside. Snowbanks getting deeper and sometimes the whole world disappearing in thick fog or swirling blizzard snow.

And so the seasons passed and Dad witnessed them through his room's windows; as the world protected him from the pandemic -- he was one of the first to be vaccinated at the care center -- he was not able to ever return home to the farm again, even though in his heart the farm was the only place he ever wanted to be.

My father always was a humble and private man.

I've already written more here than Dad ever would want said about him.

But I'm a farmer's daughter whose earliest lessons in life from my parents included love the land and appreciate its seasons. Treasure the loud bawl of a young calf, the coolness of a handful of soil slipping through fingers, the fresh scent of a spring thunderstorm, and the roughness of wheat heads ground into the palm of a hand to release their kernels. I feel Dad deserves at least a few heartfelt words to honor and thank him for all those decades he worked so hard to feed us and the rest of the world.

During the last year, I always finished each one of our phone calls with the knowledge it might be the very last time we talk. He knew that, too.

I am so glad I recorded some of our calls: our deep conversations about life and death, and about farm, family and faith. I even captured his laughter and a song or two.

Most of all, I have his precious words: "I love you."

I couldn't be home on a sunny spring day in a small Saskatchewan town -- a day after my birthday this year -- when a priest read to the small funeral gathering the eulogy I wrote for my father. But I was there in spirit.

"During his long life, Peter was a good farmer who cared about the land he worked, the animals he raised, and getting the crop safely in the bin," the priest read.

"He was brave yet gentle, quiet and yet a storyteller, honest and trustworthy, a man of deep faith and tradition, and a loyal friend. He would always help out others, whether it was a friend, a neighbor or even a stranger. He taught his kids to always help others -- because he believed it was the right thing to do, and not because they should expect something in return.

"Peter loved his family dearly, believed deeply in God, and will be greatly missed."

I love you, Dad. I miss our calls. Rest in peace. You're finally home. 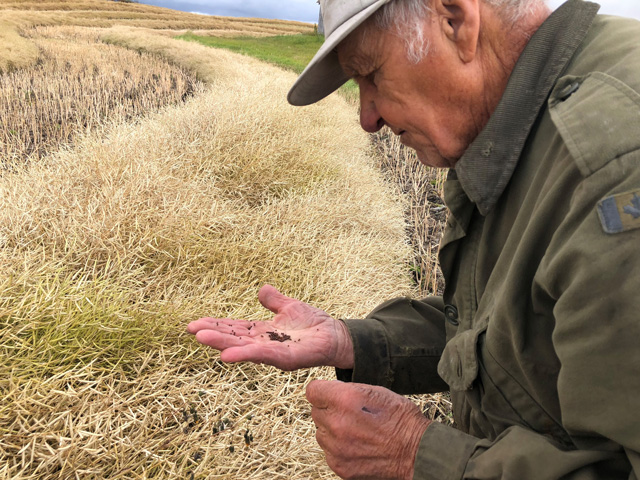