DECATUR, Ill. (DTN) -- To say that Ryan Wieck's farming roots run deep may be an understatement. The 39-year-old farmer recently moved his family to the Texas Panhandle homestead where his great grandparents settled in 1920.

Kicking his boots off each night in the same home where he was raised is no small thing in this land that demands both grit and resilience. Wieck farms and runs cows between Umbarger and Dawn, a region accustomed to weather extremes. Family documents recounting hardships endured during the Dust Bowl are part of the legacy he respects but tries not to dwell on in the middle of a prolonged drought.

Water, or lack of it, will likely be a common theme as Wieck reports in during the coming growing season as one of DTN's View From the Cab farmers. This is the 16th year for the regular editorial feature that takes a close look at crop conditions, family life and many rural issues through the eyes of two farmers in two different geographical areas.

Also reporting as part of the DTN series will be Kellie Blair from Dayton, Iowa, who shares grain and livestock farming responsibilities with her husband, AJ. Readers can learn more about their Iowa operation in a feature next week.

Wieck's 6 foot-5-inch frame lends room for personality, and a healthy dose of wry wit lies beneath the Texan's wide-brimmed hat. Telling agriculture's story and, more specifically, that of the panhandle, was the reason he volunteered to be part of the View From the Cab project. Over the past few years, he's become active in social media channels and enjoys learning about farming practices from all parts of the globe.

Officially, the Texas Panhandle consists of the northernmost 26 counties in the state -- the rectangular area, also known as the High Plains, is bordered by New Mexico to the west and Oklahoma to the north and east and lies adjacent to the Oklahoma Panhandle.

"We can watch our dog run away for two weeks because it is so flat with zero trees," Wieck said.

"There are three main types of people involved in production agriculture here: Those who strictly farm/ranch for cattle and grow crops and feed to run through a cow. There are guys who only grow crops and have nothing to do with livestock. Or, like our operation and many others, we try to farm, but also run livestock.

"Even though it can be stressful and a headache, I believe in being diversified in what we do on the farm. I won't hit the big home runs like some people, but I hope to do well on average," Wieck said.

The young farmer grew up chasing the farming dream. Emotionally close to his grandfather, Ed, and father, Randy, he yearned to follow in their footsteps. Even the 1967 Camaro that he used to drag race at the local track got traded to buy a tractor.

"There are times that I wish I still owned that car," he admitted.

In 2001, he had the opportunity to lease a section of land from a neighbor. At the time he didn't own any equipment, so the younger man struck an agreement with his father to swap his labor for the use of machinery.

A custom hay baling enterprise helped supply additional income to fund his own equipment purchases. He's slowly grown his personal farm operation to include leased and owned land. The original father-son partnership still exists, and they still work land together, but they also have separate enterprises.

"I run a few momma cows and some cattle on wheat, weather permitting. I grow a couple fields of irrigated corn and irrigated cotton. I also grow dryland cotton and dryland wheat. Every now and then we will grow some sorghum and some haygrazer (sorghum-sudan grass)," he said.

Sitting just south of Amarillo in Randall and Deaf Smith counties, Wieck has watched urban sprawl put pressure on agricultural land costs in recent years. But, even then, water remains the biggest challenge to farming in this area.

Access to irrigation water from the diminishing Ogallala and the Dockum/Santa Rosa aquifers comes with complicated usage rights and demands judicious management of resources.

"The old timers say it used to rain here," Wieck said. "We'll have a 70% chance for days and the radar may even be green, but the next thing you know, there's nothing. Here on the High Plains, the map has to be red for us to take it seriously."

Although the farm has reached century status, the original homestead is located in Bentler, Germany. When Louis Wieck left that country in 1906, he began farming in Cedar Rapids, Nebraska. The Nebraska landlord sold that farm 14 years later, causing the family to load their belongings on a train bound to Texas to join other German immigrants and become active members in a new community.

While Wieck admits to some fascination with Midwestern methods and ways, his sense of place is firmly focused on this spot in Texas. Having faith that God will provide remains central to his outlook, he said.

"My granddad always said the Texas Panhandle can promise so much and give so little or can promise nothing and give you so much," Wieck said.

Wieck blessings increased five years ago when he married Catherine (Cathy) Renee Higgins on the farm, where they now raise daughters, Callie and Charleigh. Cathy works in Hereford, Texas, for an Edward Jones financial adviser.

"Watching the girls grow and learn about agriculture has been a great thing. There are so many things that I thought everyone knew about ag, but after marrying Cathy, I have learned there is a lot that people don't understand," he said. A Facebook page, called Ryan and Cathy Wieck Farms, documents their journey.

This coming week of May, cotton planting is likely to be part of that story. The seed will be nestled into fallow wheat stubble. "Those first few leaves of a cotton plant are so tender. The stubble protects them from blowing winds," Wieck explained.

Planting, harvesting and calving season rank among his favorite farming activities. Spraying is hands down his least favorite chore. "I spend a lot of time in the sprayer, but the tedious details and worry of making certain it is done right weigh on me," he noted. New trait technologies utilizing 2,4-D and dicamba make sprayer cleanout a difficult, but necessary activity.

Still, there is one thing -- something Wieck admits few know about him -- that makes all that cab time a bit more tolerable. "I'm a great singer in the tractor," he said. "I've got the Dolly Parton song 'Islands in the Stream' nailed." 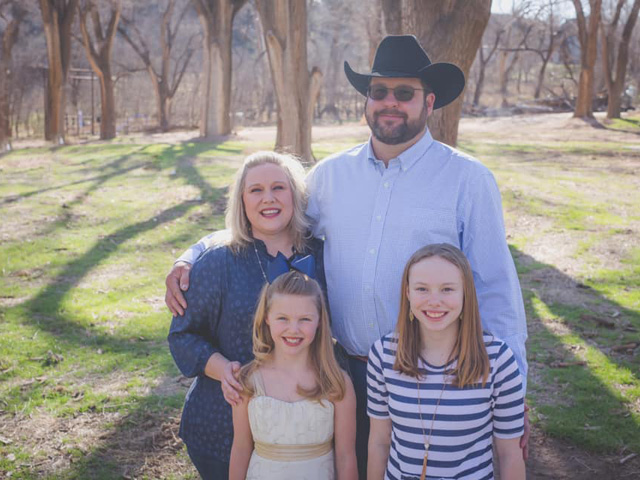