Dee River Ranch, a few miles from Aliceville, on the far western border of Alabama, has the feeling of a buttoned-up operation. Not in a soul-crushing sort of way, but an operation where a problem isn't long waiting for an answer, where experimentation defines the brand.

The well-kept sign marking the entrance to Dee River hints at what works here. "2013 Alabama Farm of Distinction" for precision technology, on-farm production of biofuels, an electronic animal ID program and fully automated irrigation. "No-Till Innovator" for cover crops that have enriched the soils with organic matter.

Annie Dee, who began farming in 1981, and brother, Mike Dee, manage the ranch. Annie's twin sons, Seth More and Jesse More, are managers and the generation-in-waiting. The brothers are 35 years old. For the sake of accuracy, Seth is the big brother, four minutes older than Jesse. He manages crops. Jesse oversees the 1,000-head cattle operation.

The family business began in 1953 with 9,000 acres in Citrus County, Florida. Watermelons, corn, soybeans and cattle were produced there. In 1989, the Southwest Florida Water Management District purchased the operation for its water resource. The family packed up and moved machinery and cattle to Aliceville.

Seth and Jesse were 3 years old when Dee River Ranch was born on the edge of the Alabama Black Belt, in Pickens County. Its 10,000 contiguous acres reach over the state line into Mississippi. It is a long way from anywhere. Heat comes with humidity. Summer nights cool to the 80s Fahrenheit. "People from Florida come up here and say this is the hottest place they've ever been in their lives," Jesse says.

Annie Dee has a reputation for innovation and toughness. "It hasn't always been the easiest being Annie Dee's son," Jesse says. "She is strong-willed like the rest of us, maybe a little stronger. She expects a lot out of us. But, she's a good boss and a good leader." Seth notes her work ethic. "She has put in many years of hard work on the farm, working in nearly every role imaginable, from bush hogging to baling hay to running the combine and working cows. I grew up watching her and learning from her relentless work ethic."

As young boys, Aliceville was not rolling with excitement. But they loved the farm. "After school, I'd ride my bike right out to the fields. I was afraid I missed something," Jesse says. Seth remembers horses and cattle. "Farming has always been something I've wanted to do," he says. "One day, I'm pushing cattle; the next day, sidedressing corn; and then another day, at a computer writing prescriptions."

Both sons draw from their mother's drive and ethic for the land -- but in different ways. "We come at things from different viewpoints," Seth says. "I like to plan things out. Jesse likes to come in, blow hard and get things done. But, it's nice to have his different perspectives." Jesse structures his work. "I love accomplishing tasks," he says. "I like to break them down, set goals and start knocking them out."

Dee River is a highly productive farm that grows corn and, with the exception of this year of low prices, soybeans. Brangus cattle graze less-productive hills. The rest of the ranch is planted to pines (less successfully than hoped because of high soil pH) and native grasses. Dee River operates on the philosophy that all land is used in the manner for which it is best suited. Something living always covers the soil. Radishes, turnips, clover, winter peas and oats are the main cover crops that have boosted soil organic levels to 4%. The farm tried rye, but its tendency to hold water in the soil adversely affected the pace of planting.

Some Dee River soils will produce 300-bushel corn with irrigation. The farm average is in the low 200s. "We plant in March to get the corn to pollinate before it gets too hot," Seth says. The August harvest is timed to capture early market premiums and avoid -- fingers crossed -- hurricanes rolling up from the Gulf of Mexico, only 250 miles south. All 4,000 acres of corn went to a poultry feed mill.

Sixty annual inches of rain stirs up a lot of boot-sucking mud. But the Mores dare not be unprepared for nearly annual droughts. "We are blessed with rain, but not much of it during the growing season," Seth explains. That rainwater is captured in a 110-acre reservoir that, at capacity, holds 1,800 acre-feet of water.

The water flows to 20 pivots sprinkling 3,000 acres. Irrigation has added 100 bushels to the farm's average yield. "Our irrigation project has proven to be one of the best management practices we have implemented," Seth says. "In addition to solving most of our drought problems, our automated system cuts man-hours and pivot downtime." The farm put up a cell tower to ensure remote communications with the system. The main pump station houses five 100-hp variable-frequency motors. The pumps can feed a single pivot or, pumping up 15,000 gallons per minute, push water out to two-thirds of the pivots at one time.

Dee River Ranch has a high reputation for innovation, and Annie Dee's boys embrace it. They will inherit soils with vigor. "We are growing our business by improving our yields," Seth says. "We have implemented variable-rate technologies and continued with our no-till and cover crops." Cover crops and irrigation are big wins. But there have been failures.

Take sunflowers. "We grew the best sunflowers of anywhere around here," Seth says. "The yield was phenomenal. But we couldn't get rid of it. We got to where we were peddling it on the side of the road in bags as birdseed." And, wheat. "We could grow wheat. It would bring in cash-flow. But, when you looked at the wheat, we were trying to double-crop soybeans behind it, we found we would have been better off just growing soybeans," he says.

Failure is not a poison, however. "We've done a lot of things well," Seth says. "But they still failed, and you learn from your failures." Jesse agrees. "When things don't work like you wanted, don't be scared to adapt. Try something else."

Seth says he embraces the success. "When you drive past fields and see rows of corn coming up just as it should, you see that dark green coloring telling you that everything is healthy, you see the pivots putting out water at the right time, you see ears of corn without insect damage ... that's when you know you are doing the right thing. (My brother and I) feel good about fulfilling (our) grandfather's legacy. It was his dream to have this farm, and we are continuing to make that happen."

This is the fourth of five profiles of our 10th class of DTN/The Progressive Farmer's 2021 America's Best Young Farmers and Ranchers. They embrace the future of agriculture and are developing the technical and managerial skills to build innovative and successful businesses.

To see videos of all the 2020 winners, and for an application for next year, see https://spotlights.dtnpf.com/… 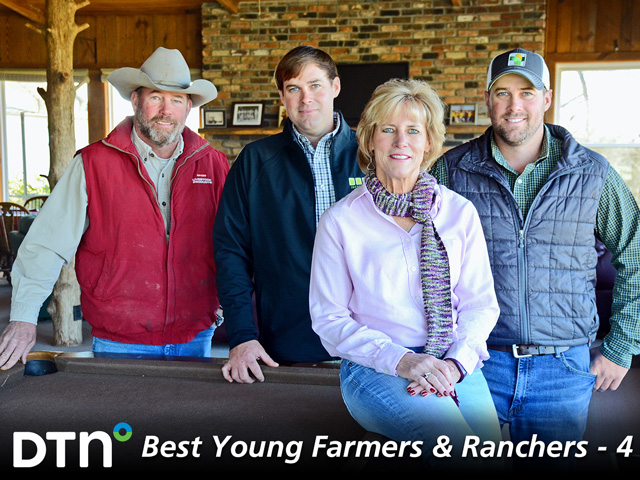