Doud largely spotlighted U.S. trade talks with China and highlighted big changes. He credited China for a massive undertaking to alter its rules, allowing U.S. agricultural exports to China to rise again this year. In addition, Doud raised concerns about the European Union. Doud said agricultural technology will be needed to feed a growing population in the world.

Doud criticized the EU's Farm-to-Fork strategy, which Doud labeled "farm to empty fork, because that's what it's going to be," he said.

The EU rolled out its Farm-to-Fork plan in May, including strategies that cut the use of pesticides 50% and the use of fertilizers 30% by 2030 and expand organic agriculture in Europe to at least 25% of the land. The EU describes the plan as being at the heart of the European Green Deal. A major aspect of the Farm-to-Fork strategy is promoting it globally, including in EU trade policy to get commitments from other countries on several aspects of the strategy.

The EU is "abandoning the use of technology," Doud said, and it has repercussions globally. "We're not going to let the EU send a message to Africa, or for that matter anywhere else in the world, that this is the direction to head, folks. We've got a lot of people in the world and we're going to need that technology. And we've got to help people understand that this is the way forward, for us and for them."

Censky, speaking at the forum later in the day, talked about USDA's agricultural innovation research agenda to increase U.S. agricultural production by 40% while reducing the industry's environmental footprint 50% by 2050. Censky said the U.S. agricultural agenda was directly at odds with the EU strategy.

Censky added that as the EU limits technology access for its farmers, "they're more likely to turn to wanting to have trade protection because they won't be able to compete. Even worse than that, the EU has a long history of exporting their beliefs or imposing them on those that want to do business with them."

That mindset has implications in Africa, the Middle East and Southeast Asia, which are growth areas for U.S. exports, Censky said.

In an interview, Censky said the U.S. and EU are in a battle over technology and the approach agriculture needs to go to achieve more sustainability results. "The EU has the approach of taking technologies away from farmers, and we think that is going to end up with trade protectionism in the end, and food insecurity globally. Whereas we think a much better approach is to welcome technologies that help farmers and ranchers farm more sustainably and that's what we're dedicated to doing."

Censky is leaving USDA shortly after the election and will return to his old job as CEO of the American Soybean Association.

Former Agriculture Secretary Tom Vilsack, now president and CEO of the U.S. Dairy Export Council, said the EU's move is one reason the U.S. dairy industry has created its own "alternative mechanism" to focus on dairy sustainability without creating a series of restrictions for farmers. "The European system, obviously, we've had for many years a significant difference of opinion about the way we farm and how we go about determining what needs to be regulated, and what needs to be allowed and who needs permission in order to be able to do certain pesticides and chemicals, and so there is obviously a very significant difference."

Vilsack added, the U.S. does not have much influence on the EU in terms of convincing Europeans to take a different approach. The challenge going forward will be how export markets react when the U.S. and Europe are competing for the same sales. "The question is whether our customers in Southeast Asia, our customers in Japan, our customers in Korea, our customers in China, are they going to impose some of the same restrictions and requirements and conditions? Or can we provide an alternative approach that is supported by science that also meets the needs of the customer today that is growing increasingly interested in sustainability?"

The new Farm-to-Fork strategy also will simply make it harder for the U.S. to negotiate any kind of trade deal with Europe down the line, Vilsack added.

Blake Hurst, president of the Missouri Farm Bureau, moderated a panel discussion with leaders in the pork and soybean industries about trade. Hurst told the audience he's concerned farmers themselves are taking on more anti-trade attitudes and do not appreciate how important trade is to the bottom line for farmers.

In an interview, Hurst said the prevailing attitude of Americans that trade is negative has now seeped into the minds of farmers, especially younger producers, who have the attitude that farmers do not need to rely on trade.

"When I talk to our members, there are people who just aren't sure we need trade and don't realize we're in a trade-dependent industry," Hurst said.

One area neither Doud nor Censky touched on in their talks was agricultural concern over the threats the Trump administration could withdraw from the World Trade Organization. More than 50 groups wrote the U.S. trade ambassador last week calling on the administration to work for reforms in the WTO rather than withdraw from it. 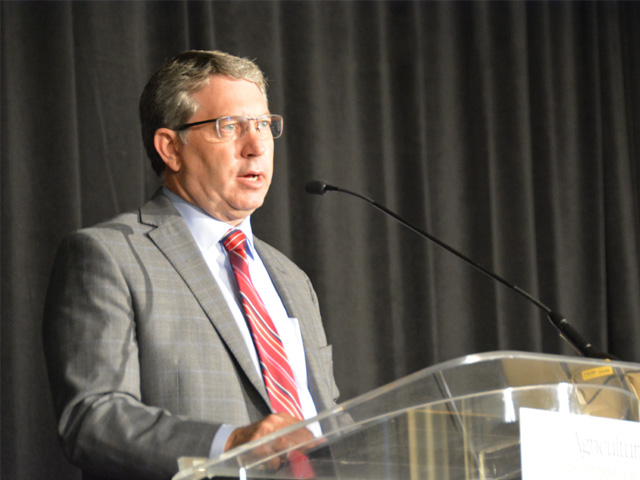