DECATUR, Ill. (DTN) -- Reid Thompson isn't surprised to get skeptical looks when others learn he left an off-farm job to return home to farm full-time in 2019. The challenges agriculture has encountered make the security of a steady paycheck seem safer, if not downright enticing.

Still, the Colfax, Illinois, farmer is holding tight to the conviction that tough times, while they may not be pleasant, can be constructive. "I've never farmed when prices were good, so we've gotten lean and are looking for every way we can get leaner," Thompson said.

The story of how Thompson Farms has trimmed expenses and continues to look for ways to streamline is just part of what readers will find as they follow this young farmer through DTN's "View From the Cab" series this season.

Also reporting as part of the project will be Ryan Jenkins, who grows cotton, peanuts, corn and soybeans in the Florida Panhandle.

Read about Jenkins Farms in our feature: https://www.dtnpf.com/…

This is the 15th year DTN has explored current crop conditions and various aspects of farm life through weekly View From the Cab reports. The combined reports from Thompson and Jenkins will be posted each Wednesday, beginning next week.

Both farmers represent the fourth generation to work their respective family farms and the fifth generation is growing beside them.

Thompson's family first settled in central Illinois in the late 1920s. He and his wife, Heather, and two sons, Abe, 3, and Hank, 1, currently farm with his parents, Gerald and Jayme.

"Mom says I was three when I first said I would come home to farm," said Thompson. "I don't think there was ever any doubt that would eventually happen. However, she also told me I'd live next to her, and I was much more skeptical about that. Then, we built a house 1,000 ft. away."

While growing up on the farm may have firmly planted the want-to seed, Thompson credits experiences gained as a farm manager with Hertz Farm Management for grounding him.

He started as an intern with the farm management firm in 2010 and accepted a full-time position after graduating from the University of Illinois. He's also a licensed real estate agent and auctioneer.

While buying and selling farms, Thompson couldn't quite shake the hankering to own one of his own. Heather's grandmother offered the young couple their first opportunity in 2015 by jointly acquiring 40 acres with them.

That first year, they picked up enough additional rental acreage to grow the home farm by 20%. Thompson finally put on his full-time farmer cap in April 2019. Heather continues to work full-time as the digital communications manager for GROWMARK, Inc.

"Had I come home immediately after college, I don't think I would have come back as a partner in the operation right away," he said. "Instead, I had farms to manage, leases to negotiate, input and grain marketing decisions to make from day one. I'm not saying those would not have happened, but doing it this way ensured I came into the operation at a management level."

Father and son farm 3,400 acres. They have individual land holdings, rental acreage and each own equipment, but there are shared leases too. "We are set up as individual entities and use a custom fee to reimburse for whatever equipment or labor is involved."

The process to bring Thompson home actually began about a decade ago when his father was faced with labor shortages with the retirement of his own father and children leaving for college.

"At the time we were turning the land black with conventional tillage. Suddenly, we had the equipment, but not the people to run it," he said. The farm first transitioned to no-till soybeans. Eventually, corn acreage was converted to strip-till.

"We became minimalists -- looking for every opportunity to reduce passes and machinery," he said. "The biggest efficiencies came by moving to strip-till. In 2018, we were able to get rid of three tractors and go to two. We were growing the farm and still able to reduce the overall horsepower being used."

Forming strips in the fall combined with drainage tile paid dividends during the wet spring of 2019, Thompson noted. "We had 500 acres planted while others were still trying to get their soil finishers out."

The father-son duo has also worked at whittling away at input expenses. "We've made a conscious effort to find margin when there isn't any," Thompson said. "For example, we no longer pay retail prices. Instead, we're using the co-op as a source to buy wholesale fertilizer off-season."

Last year they put in enough liquid nitrogen storage to hold 100% of the seasonal needs. "This pricing flexibility has allowed us to save 30% to 40% on nitrogen," he said.

"When I came home, we moved to buying all our chemistry (chemicals, herbicides, fungicides) wholesale or direct. That's saved us 40% on chemical costs.

That large savings on chemicals alone helps justify his existence on the farm, he allowed. "Plus, this kind of attitude toward savings may just be what convinces a potential crop-share client to do business with us."

Again, his off-farm experience gave him insights into pricing tactics behind seed and other inputs. Looking for additional margins, the farm recently built a chemical mix shed to allow storing, mixing and hauling of chemical loads. In 2020, there is a planned upgrade to the grain storage system to build more flexibility into marketing plans. Those storage improvements also attracted an increase in seed bean commitments this year -- another way to add margin to what they already do.

Many in this area of central Illinois moved to custom chemical application years ago, but the Thompsons find running their own sprayer more cost efficient. New chemistries have narrow spray windows and the sprayer affords timeliness. They also split apply in-season nitrogen using the sprayer and Y-drops.

Last year, they found themselves doing a fair amount of custom nitrogen application for other farmers as the season stretched. "We ran 500 hours through our sprayer last year -- two trips of nitrogen, two herbicide trips and a fungicide trip on all our corn acres. All our bean acres had three application trips and some had four in areas that were planted late; the residuals ran out and a follow-up post weed clean-up was required," he said.

The mostly flat, black prairie soils of McLean and Ford counties where Thompson farms are the envy of many. It is not unusual for McLean County, the largest county in the state, to lead the way in number of soybean acres and volume produced. Despite the wildly late 2019 season, the county still averaged 61 bushel per acre (bpa) soybeans and 198.8 bpa corn, according to the National Agricultural Statistics Service (NASS).

Such riches make for competitive cash rent agreements and land prices. In 2019, USDA-NASS found non-irrigated cash rents down slightly from previous years, but still reported McLean County cash rent at an average $255 per acre and Ford County at $225 per acre.

Thompson has retained his real estate license and hopes to keep his hand in the business. "I knew it would take six to nine months to get my feet under me when I came back to the farm -- even though I was used to helping during critical times.

"Then COVID-19 hit. Heather has been working at home, and her income is also very important to us, so childcare has also become part of my role -- although minor compared to Heather's -- as we divide up responsibilities," he said. "I'll say that first month of quarantine was an eye-opener on what we were taking for granted in services."

Still, when the whole tribe joins him in the tractor cab, he feels the positive force of being surrounded by family. "We made the choice to make this happen and we're doing everything we can to make it work," he said.

Learn more about Thompson Family Farm at their website: https://thompsonfamilyfarm.org/… 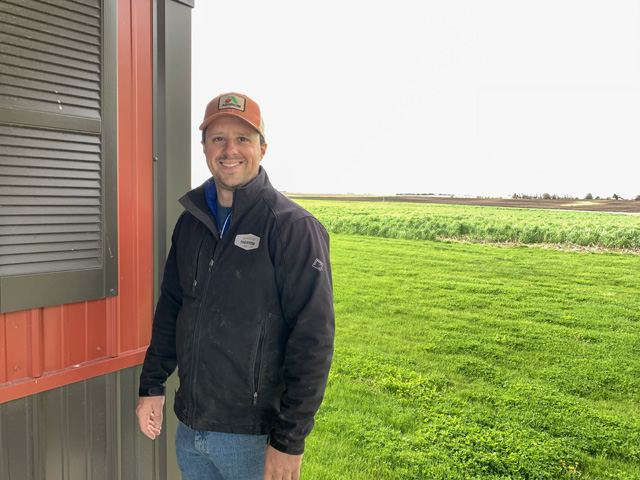