ARLINGTON, Va. (DTN) -- Attendees at USDA's annual Agricultural Outlook Forum in Virginia this week are getting an earful about the challenges posed by increasingly volatile weather extremes.

Agriculture bore many of these costs, as USDA's budget has reflected, he added. Just for 2018 and 2019, for example, USDA's Wildfire and Hurricane Indemnity Program Plus program (WHIP+) made $3 billion available to farmers and ranchers dealing with natural disasters. And as of Feb. 10, USDA's Risk Management Agency had paid out $4.3 billion in prevented planting claims.

MORE EXTREMES ON THE WAY

For producers hoping for a break from weather extremes in 2020, former Illinois state climatologist Jim Angel has bad news for you. Flooding is underway in the Southeast U.S., and the National Weather Service expects above-average precipitation for that region for the next three months -- "a recipe for disaster," as Angel put it. DTN's own Senior Ag Meteorologist Bryce Anderson has noted that this spring has a high potential for additional flooding and delayed planting. See more here: https://www.dtnpf.com/…

As temperatures rise, so does the water vapor held by the atmosphere, which is why wetter conditions have been so prominent in recent years, Angel said.

Looking further ahead, Angel posted the Climate Science Special Report's most recent predictions for environmental conditions in the latter half of the 21st century, which include increased moisture in the winter and spring months and a continued rise in the occurrence of violent, high-rainfall events. He ticked off the agricultural disruptions excessive rainfall can cause, including: reduced fieldwork days, planting delays, replanting, prevented planting, soil compaction, drainage issues, nutrient loss and more plant disease.

For its part, USDA is announcing a new initiative to make American agriculture more sustainable and resilient to these rising challenges, Secretary of Agriculture Sonny Perdue told attendees in his opening keynote address.

Perdue argued that farmers are uniquely well prepared to help mitigate the effects of climate change because of their carbon-sequestering efforts already underway, such as minimum- or no-till farming practices and cover crop use, both on the rise among producers.

The agency has set "aspirational" goals for itself to increase production by 40% while cutting the environmental footprint of U.S. agriculture in half by 2050, Perdue said. They include reducing food waste and loss by 50% by 2030, reducing nutrient loss from the soil by 30% by 2050, and setting biofuel blend rates of all transportation fuels at 15% by 2030 and 30% by 2050.

Perdue also stressed that the agricultural industry has made major strides toward reducing emissions in the past decades, stating that soil erosion has decreased by 45% between 1982 and 2012, and forestland has increased by 3 million acres since 1980, at the same time that active cropland has shrunk by 49 million acres.

The government and private sector will have to adjust the current risk management strategies in the decades ahead, noted Keith Coble, an ag economist from Mississippi State University.

"I think we can all agree we will face more severe events with potential significant losses for somebody," Coble said. "One of the real questions I think we face is can government incentivize mitigation rather than disincentivize it?" he said. "That is a real challenge that we face with crop insurance, with disaster programs, with flood insurance programs. Are we simply allowing people to take on more risk, which is going to perpetuate this?"

Corteva's Global Plant Breeding Lead Geoff Graham spoke from a crop breeding perspective, noting how far breeders have come in creating plant varieties that are tolerant to a range of stresses. He pointed out the steady, dramatic rise in corn yields, from an average of 26 bushels per acre (bpa) in the 1920s to around 170 bpa in 2019 -- with National Corn Yield Contest winner David Hula showcasing corn's potential yield of 616 bpa.

Protecting that yield potential will be a major task for crop breeders of the future, he concluded. He showed pictures of a machine that Corteva scientists use to drive across cornfields and push cornstalks over, to simulate wind storms and see which varieties withstand lodging and green snap best. "We can actually take the wind tunnel to the field, and it's improved our product line tremendously," he said. "And we're doing the same thing with drought, disease and heat, too."

The company also sends its fleet of drones over each test plot, collecting digital phenotyping data each summer. Advances in genome sequencing have also allowed modern crop breeders to vastly speed up the pace of crop breeding, he said.

"So we have to continue to drive genetic potential higher," he concluded. "And once we get it, we have to maximize sustainable yield and protect the field -- from pests and disease. Finally, I think we need to build new cropping systems. We need more diversity." 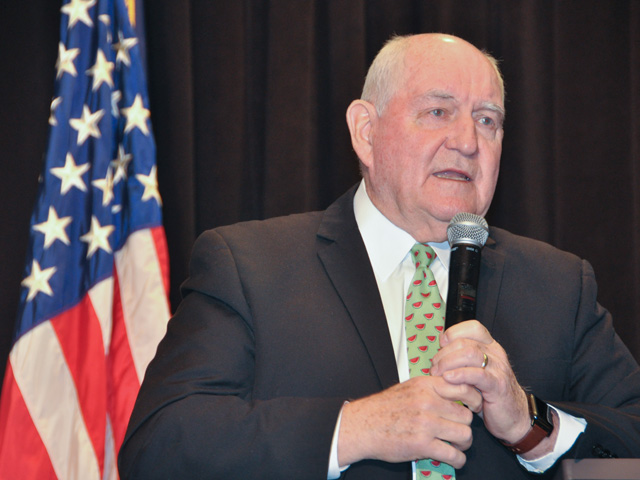