As a dawn fog lifts over eastern North Carolina, a squad of ring-necked ducks glides into decoys beckoning them down into an area of standing cornstalks poking up from a shallow water impoundment.

Hunter Thompson and his father, Seth, stand up and drop a pair of the ringnecks. Their two hunting partners also bag birds. This is the last Saturday of the 14th successful duck season at Decoy Lakes, a private farm hunting preserve in Harnett County. Although they don't quite reach a bag limit, the hunters are continuing a long tradition of hunting waterfowl in the "Tar Heel State."

to the end of the Civil War, when marshes and abandoned rice fields on old plantations attracted thousands of ducks and geese. Hunters followed. As the sport grew, wealthy outdoorsmen stayed in style at duck-hunting clubs such as Mattamuskeet Lodge, the Whalehead Club and Currituck Shooting Club.

"North Carolina has a rich history of waterfowl hunting, and we're fortunate to be able to participate in this tradition," Seth says. "This is great family recreation."

Compared to the famous shooting clubs, Decoy Lakes is relatively small-scale, but it's a great place to pursue waterfowl. Seth has built three shallow impoundments ranging in size from 6 to 8 acres. Depending on the feed, ducks like to feed in 6 to 18 inches of water. Controlling water level is key to managing impoundments. Decoy Lake's impoundments are fed by gravity from deeper ponds and are equipped with flashboard risers. He builds levees to hold water during hunting season.

As duck season approaches, Seth floods the standing crops to help attract waterfowl. The season ends Jan. 31, and he opens the risers March 1 to drain the water and dry out the soil so he can get in with planting equipment. He grows corn, millet and chufa for the birds.

"We let the birds feed and rest for the month of February to prepare for their trip back north. This is our way of giving back a little for all of the fun we have here at the farm," Seth explains.

The 1,000-acre property was used in the 1960s as a gravel quarry, and several ponds were formed by gravel pits that have filled with water.

Seth keeps some of these ponds off-limits to hunting to offer waterfowl places to rest and feel safe. To prevent overshooting, Seth only hunts at Decoy Lakes one day a week.

The impoundments were built on low-lying crop ground. The farm still produces 200 acres of corn and soybeans on its best land. Seth jokes he tries to sell enough grain to pay for his waterfowl feed crops. "Managing waterfowl habitat is expensive and a lot of work," he notes.

Seth has a significant advantage in this work because his family is in the construction site development business, which provides him access to equipment and the know-how to use it. He estimates building a 6-acre impoundment costs $30,000, but the waterfowl habitat pays off in years of family hunting enjoyment and viewing the many species of birds attracted to the farm.

Fourteen-year-old Hunter has been shooting ducks since he was 10 years old, and his 10-year-old sister occasionally hunts at Decoy Lakes.

Seth and Hunter visit other duck-hunting clubs on the North Carolina coast and make a few hunts in other states.

"I like to see different habitats and how different types of ducks work," Hunter says. "The thing about waterfowl hunting is you meet so many great people."

Seth is continuing his habitat work with two more impoundments under construction. The work goes slowly because he can only use equipment when the soil is dry. He pulls out his phone and ruefully displays a photo of a half-buried John Deere excavator in his newest pond project.

"We'll flood this area next year," he says, pointing out a low-lying stand of mixed hardwoods. "There are lots of oaks down there, and mallards love to feed on acorns."

There are only a couple of hours of shooting time left on this last Saturday of the duck season. Hunter and his 14-year-old pal C.J. Herring are still standing in the blind scanning the sky for a potential last duck. But, Seth and the other old-timers are relaxing in the back area of the duck blind swapping tales of the year's hunts and fondly remembered hunting buddies.

Decoy Lakes isn't as opulent as the Whalehead Club or Mattamuskeet Lodge in its heyday, but the farm's biggest blind does have a wood-burning stove and an easy chair that's welcomed hundreds of catnaps. It's the kind of place that attracts Seth's friends after they've finished hunting and want to enjoy a few hours to close the season.

Out in the nonshooting lakes, ducks are resting and feeding. Hopefully, these ducks will return next season and help Decoy Lakes carry on North Carolina's rich waterfowl tradition. 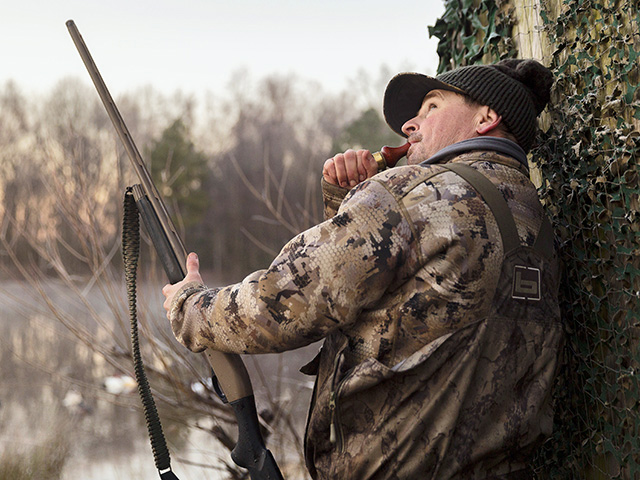