Heath Stolee has embraced the ribbing he gets for the chestnut grove he tends near Radcliffe, Iowa. "We're in corn and soybean country. All the neighbors are giving me a hard time, saying you're kind of nutty," Stolee says. To the 25 acres of Chinese chestnuts planted in astonishingly straight rows, he has bestowed the business name Nutty Farmer Chestnuts.

Stolee is an Army veteran with tours in Kuwait and Iraq. The 37-year-old works today at the National Centers for Animal Health, in Ames, Iowa, operates a small metal art business and is the commander of his community's American Legion Post 317.

Some of the 800 trees Stolee has planted are now 4 years old and beginning to produce burrs, the spiny coverings housing chestnuts.

"They're trying to reproduce," he says, pulling on a branch with burrs. "Eventually, there will be three chestnuts in each one of those burrs." Stolee's trees are about 10 years from marketable production.

That fungus left an ugly scar on the American landscape in the early 1900s. The disease felled in just 40 years more than 4 billion American chestnut trees growing among the hills of the eastern U.S. Those trees, The American Chestnut Foundation (www.acf.org) says, were among the largest, tallest and fastest-growing trees in the United States. The trees grew as far west as Ohio and southern Indiana and down through Kentucky, Tennessee, northern Alabama and northern and central Mississippi.

That ecological disaster destroyed more than the tree. The edible nut was significant in the rural economy. Hogs and cattle grew fat on the nuts they found in chestnut-dominated forests. The nuts had wide human appeal. "Chestnut ripening coincided with the Thanksgiving/Christmas holiday season, and turn-of-the-century newspaper articles often showed train cars overflowing with chestnuts rolling into major cities to be sold fresh or roasted," says a Chestnut Foundation backgrounder.

For Stolee, Chinese chestnuts offer an alternative to corn and soybeans. "I have a small acreage of 100 acres that I rent from my folks," he says. The farm has produced corn and soybeans, and at one time, a small number of purebred Charolais. Stolee's father, Tom, had rented the land to a neighbor prior to Stolee's return from Iraq. He had another vision for that land -- one his dad also thought was a bit nutty.

"Fifty acres of corn and soybeans won't work here because of the capital costs of equipment and improvements," Stolee says. "I'm trying to diversify, to find something different -- a niche market -- and chestnuts seemed to fit my lifestyle pretty well."

Stolee came upon chestnut production largely by accident. He was looking to improve the habitat of some hunting ground near his home. He had already planted oaks and fruit trees there. While visiting a chestnut orchard in southeast Iowa, he asked the owner if deer would browse chestnuts. They would. But, the owner asked why Stolee would feed $5 a pound chestnuts to deer?

Chestnuts have promise of good income deferred 15 years. A healthy, mature tree will produce 8 to 10 pounds of chestnuts, or about 2,000 pounds per acre.

How much a nut is worth is related to its size. Generally, the value of chestnuts ranges from $0.75 to $2.50 per pound wholesale and from $2 to $5 per pound retail, according to USDA's Ag Marketing Resource Center. Chestnuts are primarily sold fresh in the shell.

The U.S. doesn't have a significant chestnut industry. Surprisingly, the country is a net importer and brought in 3,200 metric tons of chestnuts in 2017, mostly from Italy.

USDA counts 919 farms producing chestnuts on 3,700 acres. The top five states with the most chestnut acreage were California, Florida, Michigan, Oregon and Virginia. U.S. chestnut production is less than 1% of total world production. Consumption could support 20,000 acres of chestnuts.

Chestnuts are sometimes referred to as the "Un-Nut." "They hardly resemble their tree-nut cousins," says the nutrition and recipe publication "Why Chestnuts?", published by The Center for Agroforestry, at the University of Missouri. Unlike pecans and walnuts, chestnuts contain only a trace of fat but have a significant amount of vitamin C.

Stolee plans to sell chestnuts directly off his farm. Growers assure him they regularly sell out their supplies. The chestnut harvest in Iowa is about six weeks, from mid-September to October.

It's a mistake to think a new chestnut farmer need only stick trees into the ground and watch them grow. The first two to three years are important for root establishment, Stolee says. Weed and grass control is vital both preplant and as the trees are establishing themselves. And, water. Stolee has installed many feet of drip irrigation lines. The alternative is hauling water. In Iowa's 2017 drought, Stolee hauled water for weeks, 70,000 gallons in all to keep his trees alive.

"Once you get them established and growing good, they need nitrogen. The trees are pretty heavy nitrogen feeders. Not as much as corn, but enough," Stolee says. He gives the trees a half-pound of urea 46-0-0 every year.

His wind-pollinated trees are planted in long rows, 40 feet apart with 40 feet between rows. He keeps the grass clear from the trunks. Pruning is important to the future productivity of the tree.

Mowing is a constant chore. In that, he found a godsend: The Farmer Veteran Fellowship Fund provides direct assistance to veterans who are in their beginning years of farming or ranching. Awards range from $1,000 to $5,000. Stolee earned a $2,000 grant for the purchase of a 10-foot John Deere rotary mower.

A 2012 Center for Agroforestry report (www.centerforagroforestry.org/pubs/chestnut.pdf) calculated a cost of $3,108 to establish over three years an acre of Chinese chestnuts in Missouri. Two-thirds of that amount was spent in the first year. The wholesale cost for 50 grafted chestnut trees is $848 dollars, or $16.95 per tree. Seedlings, 1 to 2 feet tall, are considerably less, at about $3.50 each. Stolee's trees were 8 feet tall and cost about $16 to $18 per tree.

Aside from weeds and drought, animals and birds are a chestnut grower's worst enemies. Deer love to browse the trees and rub their antlers against them. Stolee combats mice, hundreds of them. He calculated that he eradicated 500 mice in one season.

Beyond mice and mowing, Stolee enjoys the chestnuts. "It is something different in corn and soybean country. I enjoy watching them come out of dormancy and put on 2, 3 or 4 feet over the summer, and imagine how they will be in 15 years."

To end where this began: Recall those straight rows of chestnuts. They grew out of military precision. Stolee and friend Jacob Handsaker, owner of Hands On Excavating, in Radcliffe, used the company's Trimble GPS unit to line up the trees. "We drove around and GPSed every tree within a thousandth of an inch. It took us awhile to do it, but it's like Arlington National Cemetery out there." 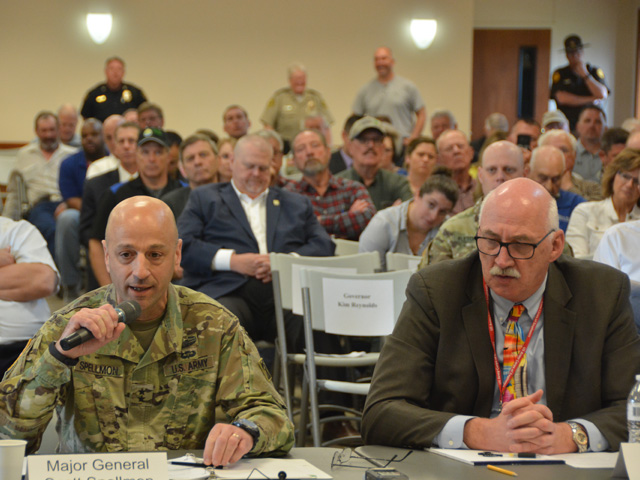