The legend of American agriculture has been one of farmers turning west for new ground -- always west. Mark Lange looked east.

His land, near O'Neill, Nebraska, lay at the edge of the state's Sandhills region. His crops were irrigated by an aquifer in decline. The state already had imposed water restrictions in other counties. Lange was convinced water regulation was coming his way. When that day came, there was no doubt his land value would take a hit. It was time to pick up his stakes and move. He did. Lange found better soils in Iowa.

He was able to sell his 1,500 acres and buy a similar number in west-central Iowa. After the 2012 harvest, the Langes packed up their entire operation and moved to Bagley, Iowa. "For the future of our farm, we thought we should move to a state where we weren't so reliant on irrigation," says Joel Lange, Mark's oldest son. "If we didn't get the inches of water we needed, we weren't going to grow crops." Mark rented the land to Joel and younger brother, Stephen.

That Joel moved to Iowa or even chose to farm as an adult was not preordained. He had no clear career path back to it. He had enlisted in the Marine Corps Reserve after high school. But, he soon longed to be his own boss -- something a Marine is not.

"I decided I missed the farm," Joel says. His father was eager to see him come back. Mark began to turn over day-to-day operations in 2008.

Joel's goal was straightforward: to farm better. That didn't mean buying a lot more land (the brothers have added 300 acres of their own).

Perhaps it is for the lack of family ties in central Iowa that the Langes feel a bit landlocked. Rents are high around Bagley, and any land that does come up for sale won't likely first come to the attention of the Langes.

But, improving the productivity of the soil they did own might prove to be a better choice, Joel says. "We love taking an average piece of ground and turning it into a high-producing farm."

Iowa rates farm ground by a Corn Suitability Rating (CSR). Joel's Greene County has an average CSR of 75. His actual farm averages 87. In wet years, county and farm yields are close. But, in dry years, his farm averages 30 to 75 bushels per acre above the county average.

So, then, in Joel's mind, "expansion" does not mean he has to farm more acres. "We can expand by making our land more productive," Joel says. "Better water infiltration, high organic levels and better biological activity will get us there." Lange Farms is planning a more aggressive crop rotation plus cover crops to achieve those goals.

In Nebraska, irrigation made the Langes' sandy ground productive. In Iowa, pattern tiling and irrigation -- where it can be deployed productively -- turns even marginal ground into significantly higher productive ground. On good ground, 80 CSR and above, Joel finds that pattern tiling increases his yields 15% to 20%.

"With irrigation, we can double production in lower-quality fields," Joel says. Perhaps more than that, really. One farm the Lange brothers purchased had a CSR of 66, well below the county average. They added irrigation to most of it. Dry weather in 2017 hammered the nonirrigated portions of that farm. Yields averaged 30 bushels. Irrigated corn yielded up to 300 bushels.

In addition to close management of production practices, Lange Farms corn and soybeans goes only to value-added markets. "None of our grain goes to an elevator; it all goes to an end user," Joel says. Within 40 miles of the farm, there are four ethanol plants and one tortilla plant. The farm grew non-GMO soybeans last season. My non-GMO beans are going to the SoyPlus facility, in Ralston, Iowa, to make high-bypass protein for dairy feed. "It's giving us a nice $1.50 premium for our crop," Joel says. "That helps a lot when times are tough."

Joel and his wife, Tanner, have four young children, two sets of twin -- three boys and a daughter. If they wish to farm, Joel will preach healthy soils.

He will tell them, "pay attention to the land. Learn more about the land than just about what seed to buy or what equipment to own. Pay attention to soil health. Improve the land that you have. Increase its production. Make it better for the next generation." As he is now.

This is the fourth of five profiles of our ninth class of DTN/The Progressive Farmer's America's Best Young Farmers and Ranchers. They represent the future of agriculture through their sense of tradition, use of new technology and business acumen.

To see videos of all the 2019 winners, and for an application for next year, see https://spotlights.dtnpf.com/… 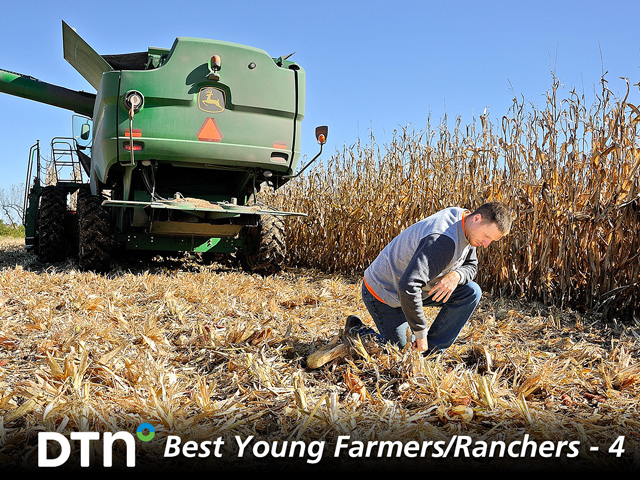