Matt Danner climbed into one of a pair of John Deere S680s the family farm ran for the 2018 harvest. From the high perch of his combine cab, Danner cut through a "very good" corn crop knowing well, that by wider measures, the fall's farm economy is stable at best -- maybe a couple of ticks below stable, even. "We are in the midst of weathering the storm," he said, "I wish we knew how long the storm was going to last."

Danner allowed that farming's overall productive successes have allowed the industry to produce its way out of tough financial straits. But, he believes grain producers, nevertheless, face a triple threat: high input prices, high labor costs and high land costs. "You put those three in the pot and stir it with low commodity prices, and you have a perfect storm."

Jamie Blythe, of Blythe Cotton Co., Town Creek, Alabama, is concerned about markets. She has locked in $6-plus 2019 new-crop wheat. But, she has sold much less corn for 2019 than normal and has made no 2019 soybean sales. "Markets are showing such hair-trigger volatility right now," she said. "I'm feeling more vulnerable for 2019 than is comfortable. If we continue to lose markets, I think it will take many, many years to win them back."

Trade showed up as a top concern in the Zogby poll. Farmers are fairly strong supporters, the poll shows, of President Donald Trump as he works to assemble new trade packages with Canada, China, the European Union, Japan, Mexico and South Korea. Foreign policy, trade policy and tariffs are among the top concerns for farmers as they go into the polling booth a few days from now.

"We really don't have a supply and demand issue. It's political, and it really depends on which way the wind blows at the moment," Danner said. "We need to fix trade, but not at all costs."

Forty-four percent of respondents to the Zogby poll see the Chinese dispute as a necessary evil -- or a short-term problem that will fix itself. Another 10.9% said the president's offer to compensate farmers for market disruptions addresses their concerns about Chinese retaliation. But, another 21.3% want Trump to reverse his actions against China.

"When it comes to politics, we've seen what they can do to the market. I guess other countries will play hardball no matter what," said Ryan Bivens, of Hodgenville, Kentucky. "Trade talks are long overdue and need to be had. But, at the same time, it's awful tough."

Zogby's survey collected results from 1,271 adults in late August (margin of error is plus or minus 2.5 percentage points). Forty percent of respondents identify themselves as Republicans, 23% as Democrats and 36% as Independents. Asked for which party respondents intend to vote, 47.4% plan to vote for Republican candidates, 27.2% will vote for Democratic candidates. Another 25.4% are not sure or do not plan to vote.

Zogby tested the 2016 election results among these respondents. The pollster asked if given the chance, would they change their vote for president, Senate or House representatives. Overall, more than 70% said no. Self-identified Republicans were the least willing to change their vote. Nearly 82% of Republicans said they wouldn't change their vote, followed by 70% of Democrats. Independents are most likely to express second thoughts. About 43% would consider voting for a different candidate.

In 2016, 46% of respondents told Zogby they intended to vote for Trump, while 24% said they would vote for Democratic presidential candidate Hillary Clinton.

But, no matter political affiliation or voting intention, farmers and ranchers hold the viability of their operations above politics. More than 72% of respondents said issues that affect their farms are more important than a political party. Only 30.2% believe President Trump devotes enough attention to rural America. Forty-seven percent believe he misses the mark on rural issues. Congress -- Republicans and Democrats -- fares worse. Just 9.1% of respondents said Congress devotes enough attention to rural issues, while 67.9% said the U.S. House and Senate fall short of rural America's expectations.

According to the Zogby poll, 45.5% of respondents are very or somewhat satisfied with the direction the Trump administration is taking on farm policy. Nearly 31% are dissatisfied.

Bivens has an eye on inflation. "We're starting to see some inflation," he said. "With that, you're seeing increases in input costs. But, demand and usage are showing good numbers, and we still have an ever-growing population that has to eat. I think I'm optimistic about the farm economy as a whole going forward."

Count P.J. Haynie among those dissatisfied with Washington. "Too many people are sitting around the table making decisions about agriculture that have no idea about the needs of a farm today," said Haynie, who operates a diverse farming and trucking operation near Reedville, Virginia. "Washington is making too many decisions on our behalf. There are not enough dirty boots at the table."

Equity erosion is critical to Danner. "We had a period of balance sheet strengthening prior to entering this strained period, so producers had a chance to get into a respectably decent financial position ahead of this," he said. "With that said, nothing and nobody prepares you for equity erosion. It's cyclical, but nobody wants to give their hard work and earnings away."

Rising interest rates can contribute to equity erosion -- hitting hard, especially, the value of land. Land represented $2.7 trillion in farm and ranch value at the end of 2017. Danner is concerned about interest rates. "Interest rates are relatively low in the grand scheme but creeping up," he pointed out.

Two-thirds of respondents said land availability is an impediment to purchasing land, and 66% said competition with outside investors makes it difficult for full-time growers to add land to their holdings.

Blythe is concerned about decreasing levels of working capital. "I think most of us are feeling the pinch in terms of working capital, and we're all trying to use every available and appropriate strategy to preserve it," she said.

"I don't think you're going to find anyone with it increasing," Bivens concurred.

The Zogby poll hinted that working capital is affecting farmer's ability to secure operating loans. While 50% said their ability to obtain an operating loan has not changed from last year, 26% said it is more difficult.

Zogby found that farmers are looking to improve their cash balances with off-farm employment. Seventy-four percent of respondents said off-farm income is important to their financial well-being (65% reported a family member working off the farm). Fifty-four percent said it is likely or somewhat likely that a family member will be seeking off-farm employment in the next year. But, not many are looking to add a new agricultural enterprise to stir up new income streams. When asked about adding cow/calf, organic crop, custom farming, retail input sales, value-added or agritourism/hunting enterprises in the next year, no single category garnered more than 20% of the responses given to Zogby.

Blythe's survival package? "We've had to become quite a bit more diverse in our crop mix, and we definitely must focus on utilizing our time, labor and equipment as efficiently as possible," she said.

Blythe Cotton Co. is exploring custom-farming opportunities and expanding its cow/calf herd to more efficiently use its ground not suitable for crops. "In some ways, the economic downturn in the ag sector has been a blessing in that it's made us tighten our belts, sharpen our pencils and try to achieve a laser focus on the practices that will keep us in business." 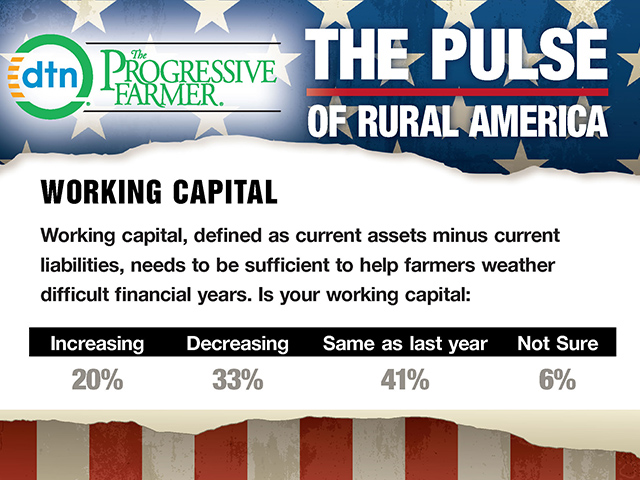