-- Look for opportunities to diversify your corn crop base, or add new crops and profitable production practices.

-- Test your markets for value-added opportunities.

-- Invest in the process of creating opportunities to strengthen demand.

Corn has a surplus problem. Again. The market gazes out in depressed wonder at an overhang that has climbed to 2.4 billion bushels. Without significant new uses for corn, this story will rerun itself year after year, continuing out as far as anyone is willing to look.

"We are outproducing usage," said Kevin Skunes, president of the National Corn Growers Association (NCGA). "We need another ethanol," he said of the biofuel consuming 5.5 billion bushels of corn last year. He paused and then admitted, "There probably isn't another ethanol out there, but we have to create profitable demand for our growers. We work on it always." The U.S. produced 16 billion gallons of ethanol in 2017, equivalent only to 19 days of U.S. oil consumption.

"There is lots of value in renewable compounds," said Keener, the director of the Center for Crops Utilization Research. "I see corn as the next oil."

Plenty of current and potential uses for corn in bioprocessing exist, but not one will consume the surplus overnight. "We need new ways to reach beyond our traditional relationships, to break out of our comfort zones. There are many market segments left to be explored," said Jim Bauman, director of market development for NCGA.

Corn's supply and demand imbalance will not be resolved on the production side of the equation. Big corn farms are structured to produce big corn crops. "Because prices are low, the only way to survive is to produce more," said Dennis Maple, Greentown, Indiana. Some of his ground yielded a 240-bushel average in 2017.

Short of catastrophic drought or production control, big corn crops are baked into the system. Here's why.

-- Corn production is evolving. Kevin Skunes farms in Cass County, North Dakota, which reported 2.8 million bushels of corn in 1978. By 2016 (most recent data), the corn harvest was 53.4 million bushels. Two hundred bushels are "not an anomaly," Skunes noted of yields there. Once a large wheat producer, Cass County now rates in the top 10 counties for value of corn produced.

"The center of the Corn Belt has been moving west and north," said Will Secor, grain and farm supply economist with CoBank, Denver. But, with minor exception, corn acres have not shrunk in any of their traditional growing areas. More than a few counties in Minnesota, North Dakota and South Dakota saw corn acres jump by 60,000 from 2006 to 2012. Portions of Colorado, Kansas, Mississippi and Nebraska also reported significant increases in corn production.

-- Corn growers are specialists. About half of all farms with 2,000 to 4,999 acres specialize in grains and oilseeds. Fifty-seven percent of corn production in 2015 came from farms producing no more than two crops -- most often corn and soybeans.

-- Technology is an enabler. On a theoretical 1,500-acre corn and soybean farm planting no herbicide-tolerant seeds, USDA calculates that operation will use 4,421 hours of labor to produce both crops in a season. That same land planted to crops with herbicide-tolerant traits cut labor demand by 1,300 hours. That frees resources for the best growers to bring high-productivity practices on to new acres. "Farms with better managers grow," wrote Daniel A. Sumner, economist at the University of California, Davis, in the "Journal of Economic Perspective" (Winter 2014). "And these managers take better advantage of innovations in technology, which themselves require more technical and managerial sophistication ... The result is higher productivity."

-- Scale favors large farms. Farms harvesting more than 2,000 acres use less than half as much labor per acre as farms harvesting fewer than 500 acres.

Brandon Hunnicutt is a member of the NCGA Corn Board and farms near Giltner, Nebraska. He produces corn, soybeans, sorghum, seed corn and popcorn, and is transitioning a portion of his land to organic production. He is intrigued by one nontraditional market -- 3-D printing.

The filament used to build prototypes in 3-D modeling can be produced from a compostable bioplastic made from cornstarch. "It's not ethanol," Hunnicutt said, "but [the filament] can be made out of corn, and that eats up some bushels. It could be huge."

An important question about bioproducts is how plant-based chemicals and products ultimately will compete with the petrochemicals. It depends, Iowa State's Keener said. "What role will government play?" he asked. Will environmental rules change to favor bioproduction? Will new tax incentives be created? Advanced bioprocessing capabilities can be added to biorefineries. "[But how] do you generate income for 10 years or maybe 20 years to [produce] a payback?" Keener asked. "You need something to motivate investment, to get people to invest."

Some states are offering motivation -- by the rule of law and by incentive.

USDA oversees the nation's BioPreferred Program. It includes a mandatory bioproducts federal purchasing initiative and a voluntary labeling program. There is great potential for the biobased market represented by the $500 billion the federal government spends in a year on goods and services. The BioPreferred Program's voluntary labeling program recognizes more than 2,700 products authorized to display USDA's Certified Biobased Product label.

Coca-Cola's "PlantBottle" packaging has been awarded one of the labels. The PlantBottle is made from 30% planted-based material and 70% traditional petroleum-based material. With billions of bottles distributed, the company estimated in 2015 PlantBottle had eliminated the equivalent of the CO2 emissions produced from burning 36 million gallons of gasoline. The company is working to produce a 100% plant-based bottle package by 2020.

There are bigger new product opportunities for corn. Petroleum-based polyethylene is widely used in producing plastics. As a renewable chemical, bioethylene is produced from bioethanol.

"[Ethylene] could expand the opportunities for use of ethanol beyond its use as a fuel," Keener said. Bioethylene production consumes less energy than its petroleum cousin and has a reduced impact on the environment. The petrochemical industry produces 140 million tons of ethylene per year. Produced as a corn-based product, bioethylene could represent a market of as much as 4 billion or 5 billion bushels of corn.

One winner is Lygos, from Berkley, California. The award recognizes the research company's achievements in its "Bio-Malonate" manufacturing technology. Malonic acid is used in the production of electronics, fragrances, specialty solvents and pharmaceuticals. It is currently produced in China from cyanide and chloroacetic acid. Both are highly hazardous materials.

Lygos's fermentation process uses sugar and water to produce a competitive malonic acid. "The recognition is fantastic," said Eric Steen, founder and CEO of Lygos. "But, more important is how we team up to bring this manufacturing back to the U.S., how we replace petrochemicals with bioproducts and even come up with new chemistries."

The Consider Corn Challenge is a novel investment in demand. The program seeks processes that increase real-world corn grind.

"The renewables industry is already an important driver for the U.S. economy, generating billions of dollars in revenue," Bruce Peterson, chairman of NCGA's Feed, Food and Industrial Action Team, said in February at the Consider Corn Challenge award ceremony in Anaheim, California. "But, the additional potential in the emerging bioeconomy remains largely untapped."

The six winners in the Consider Corn Challenge focus on a broad range of corn-derived products.

Annikki -- Annikki, of Chicago, Illinois, is pursuing technology to produce FDCA (furandicarboxylic acid), a replacement for petroleum-derived terephthalic acid for plastic bottles, fibers and nylons. FDCA has the potential to replace 100 million tons of petrochemicals.

Iowa Corn Promotion Board -- Technology developed by Iowa corn growers is used in the production of MEG (monoethylene glycol). MEG has diverse applications, from coolants and heat-transfer fluid to packaging material. The market is worth $25 billion.

Sasya -- Sasya, of Maple Grove, Minnesota, is generating methylmalonic acid (MMA) that can compete in methyl methacrylate markets for making acrylic glass and adhesives. The market is worth $7 billion.

South Dakota State University -- SDSU's efforts focus on renewable precursors, such as glycerol and lactic acid, to make unsaturated polyester resins (UPRs). UPRs are used to make large plastic tanks, as a binder in fiberglass sheets and in other reinforced plastics. 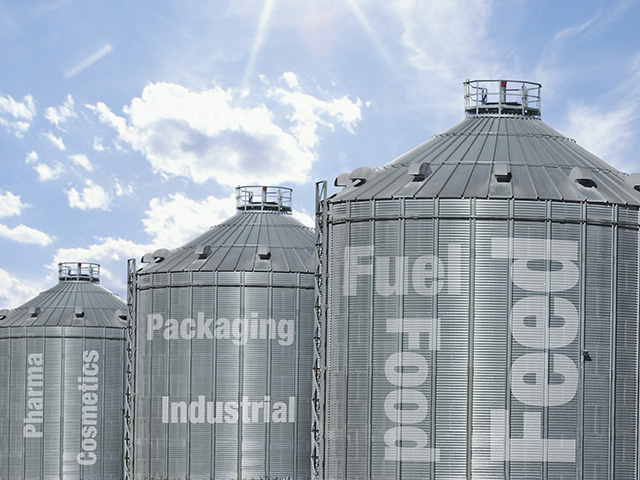