MIDGELL, Prince Edward Island, Canada (DTN) -- Despite controversy over U.S. dairy trade with Canada, U.S. Secretary of Agriculture Sonny Perdue and Canada's Minister of Agriculture and Agri-Food Lawrence MacAulay both stressed Friday that any trade conflicts right now won't do long-term harm to generations of trade and trust between the two countries.

Perdue traveled to Prince Edward Island, Canada's smallest province, to visit MacAulay's potato farm in Midgell, overlooking a scenic bay that drains to the Gulf of St. Lawrence. The visit comes as Canada prepares to place 10% to 25% tariffs on more than $16 billion in U.S. products on July 1 in retaliation for tariffs placed on Canadian steel and aluminum.

"The relationship between Canada and the United States runs deep," MacAulay said. "It's a relationship built on a generation of trade, trust and goals. I might also say that we're actually family. We all have relatives here and in the states and I have no doubt this will make it stronger than ever."

The agricultural leaders also assured farmers on both sides of the border they were not dismantling Canada's supply management system.

"I don't think it's in the interest of the United States to try to dictate to Canada regarding how they manage their dairy production," Perdue said.

Perdue softened any problems that arose between Trump and Trudeau, telling CBC television, "We view ourselves as family, and even families have emotional outbursts from time to time."

MacAulay sought to downplay any tension, saying that in the agricultural field, as far as he and Perdue are concerned, Canada and the United States remain good friends and trading partners.

Instead, Perdue said he and MacAulay discussed milk solid production and what he called Canada's overproduction, resulting in depressed world prices.

"We do want the supply to be managed. When you have an overproduction of milk solids that go into the global market at lower prices and based on a quota system that's very profitable domestically, those are the kinds of issues we expect to be the essence of discussion regarding NAFTA (North American Free Trade Agreement)," Perdue said.

Perdue added that U.S. farmers would like to see more access to Canada's markets, "just as we've offered to the U.S. Hopefully we are moving towards a more reciprocal arrangement that really could be, in light of NAFTA, could be free trade among North America."

MacAulay was quick to point out, however, there is a worldwide surplus of milk solids.

"Sonny and I are both well aware that Canada has less than 1% of the world supply, so we're not massive producers, that's for sure," MacAulay said.

Perdue acknowledged North American farmers are worried agricultural products could be the target of trade retaliation in case NAFTA talks break down -- and that's what he and MacAulay are trying to avoid by Friday's meeting.

"There's legitimate anxiety among producers on both sides of the border -- agricultural commodities many times are the tip of the spear in any type of retaliatory actions. That's what we're here to try to prevent, and prevent any kind of escalation," Perdue said. He said both he and MacAulay will instruct NAFTA negotiators not to "drag agriculture into some of the issues we may have."

MacAulay noted agricultural and food trade has quadrupled since NAFTA went into effect. "We just want to make sure what we put together is better than ever," he said. MacAulay added, "It's important that people realize the rapport that Sonny Perdue and I have and what we want to do is make things better for the agricultural sector in North America. And that is what we will do."

While Canada has felt the pressure by the United States to get rid of its supply management system, Perdue was asked by reporters whether U.S. agriculture would consider adopting a supply and demand system for dairy farmers.

"Probably most farmers would say, 'yes, if you guarantee me a price and a profit that would be wonderful,' but that's not the way our economy works in the United States," Perdue said. "We try to be market-driven, even in our farm program and let farmers being affected by weak prices understand to not continue to overproduce. That's just the way the market works."

Still, Perdue added that in the U.S. "there is no real safety net for milk." He said the Margin Protection Program is more of an insurance program to help with risk. Congress is in the middle of reauthorizing the farm bill that would boost the program to help producers mitigate financial losses and assist with returning producers to profitability.

"We want our farmers to be resilient enough financially to be able to continue in their livelihood -- not to guarantee them a profit or profitability, but when bad things happen then they can continue," Perdue said.

Allison Finnamore is a freelance journalist from New Brunswick, Canada. 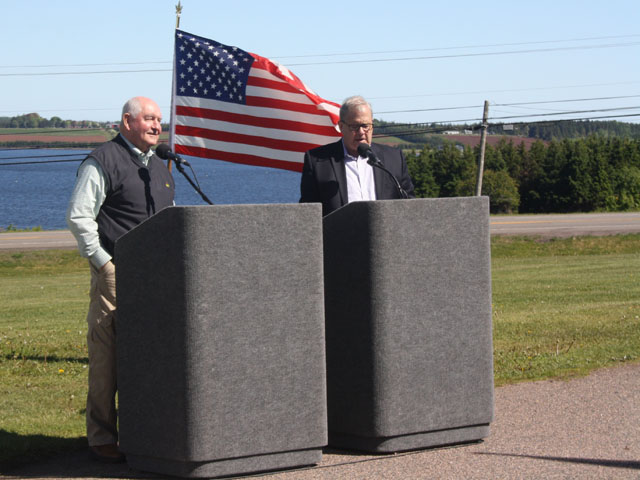