So when the Renewable Fuels Association approached the Newburgh, New York- based Orange County Choppers owner and star of the Discovery Channel's "American Chopper" series about building a customized ethanol bike, Teutul told DTN he got educated.

Now he's convinced ethanol is a good fuel for motorcycles at a time when the biking industry is chief among the harshest critics of the corn-based fuel.

"It's funny, when RFA came to us I really didn't know much about ethanol," he said during a public appearance at the Fuel Ethanol Workshop in Omaha this week.

"I had just heard things about ethanol in motorcycles that weren't really good. So until we built the bike and we got it running on ethanol, it wasn't until then that I realized it's actually a really great product for motorcycles; especially the air-cooling ones that I ride and build, because they run so much cooler than pump gas. Not only that, it's sustainable, it's made here, it's supporting the farmers, they support retired military. I started to really do my due diligence about it and realized that not only is there nothing bad about it, but every attribute of it is good."

The customized E85 bike was unveiled on Monday night to a television audience that spans across more than 260 countries on the latest episode of "American Chopper." When the show went off air nearly six years ago, it was averaging about 4 million viewers per episode. The show returned to the air in May.

American Chopper provides an obvious and important forum for the ethanol industry -- a massive audience of motorcycle lovers, many who know little or nothing about the fuel but are very familiar with one of the world's renowned chopper designers.

Robert White, vice president of industry relations for the RFA, was part of the filming of the episode at East Kansas Agri-Energy's ethanol plant in Garnett, Kansas.

"It all started with farmers wanting another market for their corn," Bill Pracht, chairman of the board for East Kansas Agri-Energy tells Teutul during a tour of the plant on the episode. "The ethanol industry has been a fabulous market for corn."

White told DTN the bike is a tool to teach the proper use of fuels to the motorcycle community as part of the RFA's "Fuel Your Knowledge" campaign. "If they see the show, they know the bike," he said. "I expect this to continue to build and grow."

The custom red, white and blue air-cooled chopper that includes the RFA logo was designed to run specifically on E85, which includes specific adjustments to the carburetor and timing.

White said years ago he altered his own bike to run on E85.

"I pull up to the pump and I can pump either $1.90 for E85 or $3.50 for premium," he said. "The bike needs 90-plus octane to make it happen. Our end game is to demonstrate compatibility. The motorcycle community is concerned about E10."

Unlike the strong fumes coming from bikes running on gasoline, Teutul said he noticed the E85 bike's fumes smelled like popcorn.

"It's a very low imprint from that standpoint, and it runs phenomenal," he said. "It's been a great experience and then creatively we just stylized the bike in the fashion in which we wanted to represent ethanol as being a very high-functioning product."

Teutul said he believes a bike running on E85 has an advantage over those running on gasoline.

"One of the major things is unquestionably how cool it runs," he said.

"The temperature at which it runs is so much lower than fossil fuels. Just from a functioning standpoint, it really runs well in a motorcycle, especially in an air-cooled motorcycle. You've gotta remember a lot of these big events like Bike Week, you're in traffic most of the time. The biggest problem with these air-cooled motors is after a while they don't want to run anymore because they get too hot. I've not proved this, but I have to believe it's such a lower flashpoint that you should be able to hang longer than anyone who's running gas in that scenario."

There is an impression among many riders in the motorcycle community that fuels like E10 is harmful to bikes, although the fuel is approved for use by every motorcycle manufacturer.

"I'm a believer," Teutul said. "I don't know that getting pure ethanol or E85 you have to go to the right places to get it, but if you do want to run it in your area in your area and you have it, it's really simple. If you have a carburetor you have to bring the jets up by 30%, which is just larger jetting, really any shop can do it or you can do it yourself. You have to advance the timing by like 30% as well and that's all it takes. It doesn't eat anything inside the carburetor like people say it does. You do want to run it. You don't want it sitting too long. You don't want gas sitting too long in a carburetor."

Teutul told DTN he was sold on ethanol when he considered all the ways it helps rural communities and even veterans.

"Every aspect of it from the beginning to the end, is really a great process and it's really great economically for the areas these plants pop up," he said.

"They're supporting the local community and the local economy. They're giving farmers more opportunity to sell corn, even more localized instead of going further away. So I couldn't find one thing wrong with it and then we ran it in the bike, and when I first started it up I was extremely happy with it." 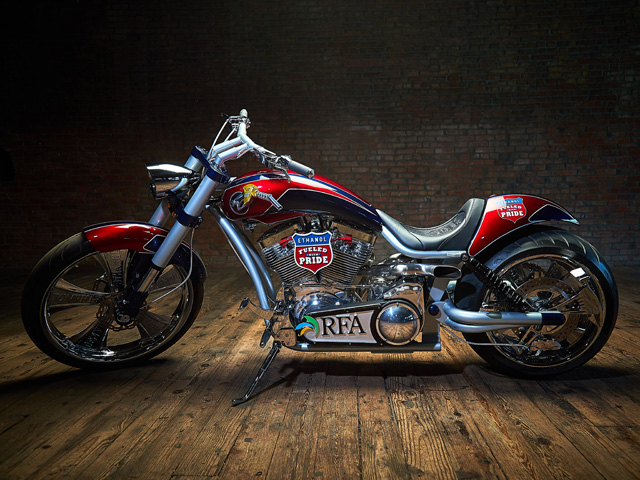