INDIANOLA, Iowa (DTN) -- Agricultural lenders appear to be more cooperative than Mother Nature this spring as cold, wet weather delays fieldwork but, for the most part, farmers are finding the financing they need to plant a crop.

For the past three years, DTN has heard various rumors of farmers not being able to get operating money and tenants not being able to farm leased ground. However, that does not seem widespread this spring, even as profit margins dip below breakeven.

"There are some pocket areas worse than others, but we came into our March 1 cash-rent collections pretty confident," reported Jim Farrell, president of Farmers National Company, based in Omaha with offices in 28 states that manage more than 5,000 farms. "Of our total cash-rent collections, less than 1% had any issues. In fact, we saw less stress this year than a year ago," said Farrell.

"Situations of default are still very intermittent," agreed Michael Hein, vice president of Liberty Bank in Durant, Iowa. The eastern Iowa banker explained that land values have provided stability to farmers' balance sheets and have allowed most borrowers to be able to absorb the losses that have occurred.

Ag lenders are still extremely concerned about weakening of net earnings, Hein said, but it's not at a widespread crisis point yet. "What's taking place is lenders are refinancing short-term debt to longer-term equipment and land debt. But you can only go to that so many times," Hein said.

Hein is in a high-cash-rent area -- 200- to 225-bushel-per-acre corn ground is still cash renting for higher than $300 to $350 per acre. "There have been some very minor adjustments to cash rents in our area, but there are still a lot of high rents being paid that leave very little, if any, return to the operator," said Hein.

Former agricultural banker, now consultant, Mark Nowak in Wells, Minnesota, said he thought there would be more farm sales this winter in south-central Minnesota. "The only local farm sale I know was a retiring couple who sold off their equipment and are going to rent their land to a young farmer," Nowak reported.

Trying to get a positive cash flow is difficult, but not impossible for many operations, according to Nowak. Generally, farmers are not making any capital purchases, he said. "Cash rents are down a little bit here and there, but nothing major."

It also helps that interest rates remain low. Nowak was able to help a farm client convert a contract for deed on a piece of land to a 20-year mortgage at 4.6%, which lowered his land payment by 30%.

MORE PROBLEMS IN THE WEST AND SOUTH

"Wheat has not made money for the past two years," explained Farrell with Farmers National Company. "If a wheat farmer did not have soybeans in his rotation, he's probably facing significant financial pressure. We're seeing more downward movement in dryland wheat country."

There have been some very large bankruptcies that grabbed headlines in the past year. Boersen Farms in Zeeland, Michigan, had planted 83,000 acres of corn and soybeans but defaulted on its $145.3 million loan last fall. (See https://bit.ly/… and https://bit.ly/…)

"While it's a pretty tough environment in agriculture right now, we haven't seen a large increase in land [for sale] listings or pressure by lenders," Farrell noted.

Another positive -- the spring grain and oilseed rally. If farmers can lock in a profit on this rally in commodity prices, they may be able to withstand the political posturing of a threatened trade war, Farrell said.

Nowak agreed that marketing strategies are of the utmost importance as a big negative weather event would rally prices nicely but another good (big) crop would see prices back under cost of production by harvest. Options are a good tool for this purpose. Sell and defend, advised Nowak.

"I'm cautiously optimistic," said Nowak. "We seem to be toughing it out through an economy that is struggling. But it's nothing like it was in the 1980s farm crisis."

Elizabeth Williams can be reached at elizabeth.williams@dtn.com 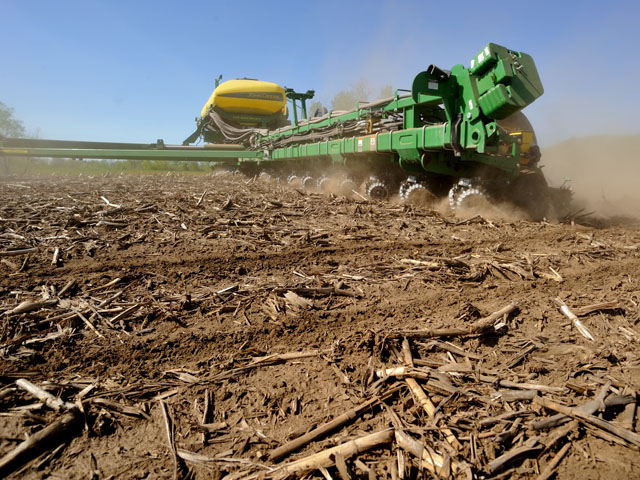