Last month this column focused on heat housers. I saw a Twitter conversation between a couple farmers about the subject, which sparked my column; one farmer didn't even know what they were.

Well, many responses from readers told me many have not forgotten about heat housers; there are lots of memories of using them.

Here are five stories. Thanks to everyone who sent me their experiences.

Your story on heat housers brought back memories of growing up on the dairy farm in the 1950-60s in Montcalm County, Michigan. We had to clean the barn and spread manure every morning during the time the cows were in the barn and it was my job most of the time.

We had a Farmall H dedicated to that task and you nailed it when talking about those units. The windshields did go bad in a short period of time and ours was no exception, so a road trip was pretty cold in the face, no matter which way you traveled.

Obviously, you completed the job as rapidly as possible. A neighbor had a Ferguson 35 with a heat houser and that was a better deal because you sat lower in it than on the H. I guess they were the forerunner of tractor cabs.

My first cab was on a MF 1085 with an add-on heater, which was great for picking ear corn, but with no AC it got pretty warm on a summer day spraying apples. I really appreciate the newer cabs with the modern air and heat they have.

I read with interest your article on heat housers. I certainly remember them well as I was born in 1958.

We had heat housers and windshields for an International 460, 766, and 856. It was just as you said, depending on the wind and, yes, they are still all hanging in the corner of the shed.

Thanks for the memories.

I have a heat houser experience to pass along. I farmed with my brother until he passed away five years ago at age 69.

All our years of raising livestock, and even taking in some background cattle, we didn't have a loader on a cabbed tractor. Cold, snow or rain, we loaded feed for up to 500 head or more for several years.

Needless to say, when a fire in the shop ruined the heat houser, or comfort cover as some of our neighbors referred to them, we quickly found a replacement.

May I add a bit of International history also? For many years, that loader tractor was an IH HYDRO 1026. Do you see where I am going?

Yes, as the paint wore and weathered off, we discovered gold paint under the red. I think the tractor wore out two engines over the years and when my brother advertised it for sale, the hydro was barely able to pull a grade by itself.

The person that purchased the 1026 asked if it would run in a parade. No questions or comments were made or asked if there were any hills on the parade route.

I started farming in 1961 after five years at University of Illinois and four years in the Air Force. Dad had heat housers for three of the four tractors which we used in fall and spring.

They worked good going against the wind, but not too good if wind was from behind you. Our first cab had no heating or cooling.

I ran two combines before I got one with a cab. Gradually worked up to tractor cabs on everything except loader tractor.

My last crop was 2008 and my farm sale was in 2009. I still have a heat houser in a machine shed which I forgot to sell.

When I was still a kid in school (to put this into context I am now 61) I don't remember anyone in the neighborhood having a tractor with a cab. By the time I was in high school we were still operating very primitively compared to today's standards.

I'm not sure exactly how old I was on this particular winter, but I am pretty sure that I was under 16. My dad had a 620 John Deere and my uncle had a 460 International.

Both of them farmed with my grandparents. Since I was still in school and would get home quicker than the adults from their "town" jobs, and also since I had all this extra time from Christmas vacation, it was decided that I would be the one to do the cow chores, which was mostly hauling round bales of hay out to the cows and chopping ice in the pond so they could drink.

My uncle's farm was down the road about three miles and he did his own chores, but my dad's place was only about a half a mile from my grandparent's farm. By this time my grandparents had a machine shed that the tractors were parked in.

I guess my uncle felt sorry for me as this winter was a particularly cold and bitter one, so he put a heat houser that he owned on my dad's 620 which was parked at my grandparents' place. I would feed hay to my grandparents' cows and then take hay up the road to feed my dad's cows.

The only flaw in the arrangement was that my dad's 620 apparently had an exhaust leak where the exhaust pipe connected to the exhaust manifold. As I recall the exhaust doughnut had gone bad.

Since my family believed wholeheartedly in the saying, "If it works, don't fix it," the repairs were never made as it would have required buying and installing a new one. That, plus I'm sure the nuts would have been frozen on the studs and we did not own a cutting torch.

So for the rest of the winter on the most bitter days I would alternate back and forth between sitting down behind the windshield to warm up and standing up to get some fresh air. It got bad enough that I eventually had to hold my breath while sitting, although the fumes would still make my eyes water.

My kids think it is child abuse when I "make" them go with me to feed hay to our cows even though we are in a pickup and mostly all they have to do is open the gates. 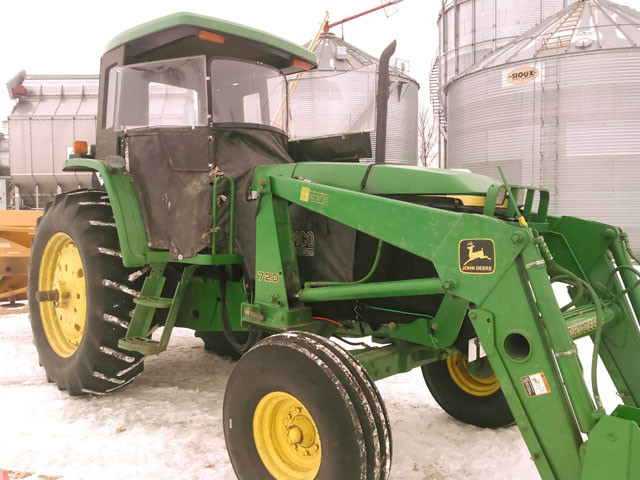