A loaded semitruck idled at the edge of a newly harvested cornfield one night last fall. Wade Wilhour stood nearby, his arm draped over the shoulder of his 10-year-old son, Andrew. Both look out into the darkness. It's as if they saw a similar future.

Wade is a thoughtful man, spare with words, wary of the camera lens pointing in his direction. But, talk of Andrew changes his countenance. Thought of the young boy brings a contented smile to the face of this corn and soybean farmer from Beecher City, Illinois.

"Andrew has been interested in farming from a young age," says Wade of the Wilhour Farms family operation. "It kind of reminds me of myself with my dad, just always wanting to be there. If one of my other brothers got to go to the field without me, I was pretty mad. I find Andrew being the same way. It's pretty exciting for me seeing my own son doing the same things I was doing."

Wade is the son of Mike and Judy Wilhour, and brother to Weston, Chad, Blaine, Justin and Amanda. The brothers and sister together have 22 children. The oldest is Wade's and his wife, Emily's, daughter, Laney. She is a junior in high school.

Wade is an 11-year member of the Fayette County, Illinois, government board. He is a man deep in faith, a deacon in the Beecher City Church of Christ. "Faith has been a big part of who I am as a husband, who I am as a dad and who I am as a farmer," he says. "I just couldn't imagine not having the faith I have and still being a farmer."

Wilhour Farms is several thousand acres in south-central Illinois -- the operation brought here by Mike in 1977. He began planting cover crops 25 years ago. The farm's timber soils are difficult to work and low in organic matter. Cereal rye cover crops made a difference. Organic matter levels rose from 1 to 2.8% in some areas, Wade explains. "That's pretty substantial. It's had a lot of benefit." Water infiltration and root penetration are much improved.

The cover crop has a spring benefit. "The rye is sucking up moisture and allows us to get into the field earlier when others cannot," he says. "It's allowed us to get better beans. The earlier you can plant your beans, the better. We've seen that work on our farm."

It has become productive soil. In 2017, Wade harvested soybeans in the 60-bushel range and pulled in a corn crop averaging about 170 bushels per acre.

Wade and his family work with 60 landowners (from 3 acres to 300 acres). Extended family owns much of the ground, with most of it rented on shares. He's attentive to the landowners.

Randy Clark, of Effingham, Illinois, rents 230 acres to Wade. "Because of Wade's reputation, proven track record and his ability to use technology to produce higher yields, landowners are coming to him," he says.

Clark recalls how the land he bought in 2001 was highly eroded. Wade buried tile, performed some bulldozer work, planted cover crops and added fabric strips and rock to check erosion. "My yields have almost doubled since 2001," Clark says.

Wade continually evaluates new technology for the operation. It is a process of considered progress within the family. "You can get wrapped up in a lot of technology," he says.

For example, the family decided to add Precision Planting's DeltaForce hydraulic downforce control system to a planter. Wade is sold on the depth control it brings. "Planting consistently through different soil types is key. It affects the rest of the season," he says. But it was a decision made in close consultation with his brothers and father.

"I bring different ideas for technology to my dad and brothers, sometimes just in general conversation, and sometimes I've researched it and believe it should be applied to our farm," Wade says. "One thing I have learned over the years is I need to be prepared when presenting ideas, because ultimately, it is everyone's decision what we do on this farm."

Wade's greatest strength, his father says, is ensuring equipment and supplies are where they need to be and at the time they are supposed to be there. "[He] keeps the farm running smoothly and efficiently," Mike says.

Wilhour Farms is spread out in a 50-mile radius from home. Wade, by his own admission, spends less time in the tractor and more time on the ground with a radio hanging from his hip. He is, in essence, the farm's chief logistician.

"My goal is to keep operators in their seats," Wade says. "In the spring, it's all about keeping the planters moving. In the fall, it's all about the combines," he says.

Wade is quick to credit David Abendroth in the work. A 13-year employee with Wilhour Farms, Abendroth is an excellent mechanic. The operation would grind to a halt, Wade says, without Abendroth's talents. "He is also not afraid to contribute ideas and ways to make our farm better. Having an employee contribute in such a positive way like he does is a rarity," he says.

Wilhour Farms is a productive business because of its many moving human pieces -- parents, brothers, wives, sisters-in-law and a few of those 22 kids. "Don't be surprised," Wade says, "if you see a vehicle driving down a country road following a piece of equipment that appears to have no one in the driver's seat. No, we haven't invested in driverless vehicles; it's just one of the kids in training."

This is the first of five profiles of our eighth class of DTN/The Progressive Farmer's America's Best Young Farmers and Ranchers. They embrace the future of agriculture and are developing the technical and managerial skills to build innovative and successful businesses. They are among the best of their generation.

To see videos of all the 2018 winners, and for an application for next year, see https://spotlights.dtnpf.com/… 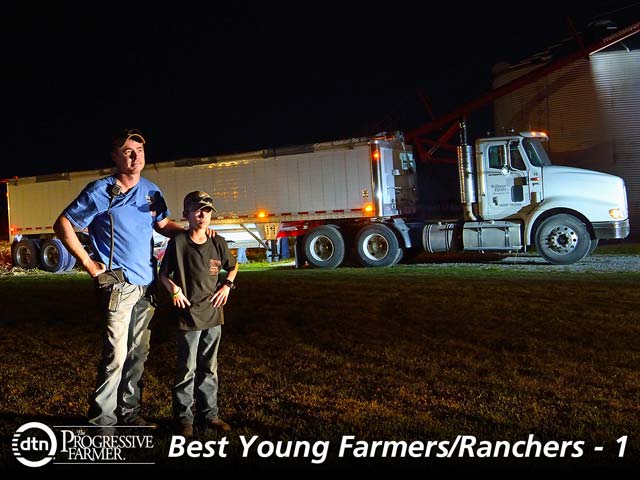