OMAHA (DTN) -- The effort to expand rural broadband access will continue in 2018. A newly formed advocacy group announced it will be pushing the Federal Communications Commission to expand the number of digital "white space" channels available across the country from two to three.

Back in July 2017, Microsoft announced an initiative to expand rural broadband access through the use of white space, which already is available and largely unused.

TV white space essentially is unused airwaves left by the termination of analog television as digital was implemented. Microsoft's idea is to expand broadband access using a mixture of technology, deploying new television white spaces with traditional satellite, fixed wireless and fiber optic connections. There is technology available that would allow rural residents to buy router-type devices to access the TV white space.

Zachary Cikanek, national spokesperson for Connect Americans Now, a new advocacy group that includes Microsoft in its membership, said it is undertaking a national campaign to expand the white space effort.

"Right now, there is one channel where this technology is already used in pilot programs and a second where it's currently allowed, pending final regulatory action by the FCC," he said.

"To provide full-speed broadband access to rural residents, we're calling on the FCC to ensure that at least three channels remain available in every market, particularly as they debate the future use of these low bands over the coming year."

Connect Americans Now, said in a news release its goal is to close the "digital divide" by 2022.

As a part of the initial launch, CAN is forming partnerships across rural America to educate stakeholders about the opportunities white spaces provide. The group also is launching an advocacy campaign in Washington, D.C. "FCC regulators have the authority to make sufficient unlicensed spectrum available in each market for high-speed internet," the group said in a news release.

CAN said there are a number of problems with not having broadband access in rural areas, including expanding the use of precision agriculture technology.

"Broadband access brings the promise of precision agriculture, including remote monitoring equipment that helps farmers save money by optimizing irrigation, conserving resources and increasing yields," the group said. "It also allows farmers to search for new customers, find buyers willing to pay higher prices and identify the most affordable sources of seeds, fertilizers and farm equipment."

In December, Wisconsin Republican Gov. Scott Walker called on the FCC to allow the expanded use of white space.

In July 2017, Rep. Kevin Cramer, R-N.D., and North Dakota Gov. Doug Burgum began circulating letters for signature in the U.S. House of Representatives and across all 50 states to encourage the FCC to adopt new spectrum standards.

"There are amazing educational resources online, but students without broadband can easily fall behind their peers," National Rural Education Association Executive Director Allen Pratt said in a statement.

"In rural communities, the digital divide is standing between millions of kids and the ability to research an author, watch a documentary, or just turn in assignments. We want all students to learn the computer skills that will help them succeed in the 21st century. We urge regulators to open a dialogue with our team at Connect Americans Now and unlock the incredible possibilities offered by this low band white spaces spectrum."

In July, Microsoft announced a philanthropic initiative to provide broadband access to more than 23 million rural Americans using white space, including providing broadband to about 2 million people in rural areas by the middle of 2018. About 34 million people lack access to broadband, including about 23.4 million in rural America. Microsoft said its goal was to close that gap in the next five years.

Microsoft is among a group of technology companies pushing the idea for the past decade. Microsoft joined Google, Dell, HP, Intel, Philips, Earthlink and Samsung, among others, to form the White Spaces Coalition.

Microsoft's initiative faces powerful opposition to the use of TV white space from the likes of the National Association of Broadcasters. 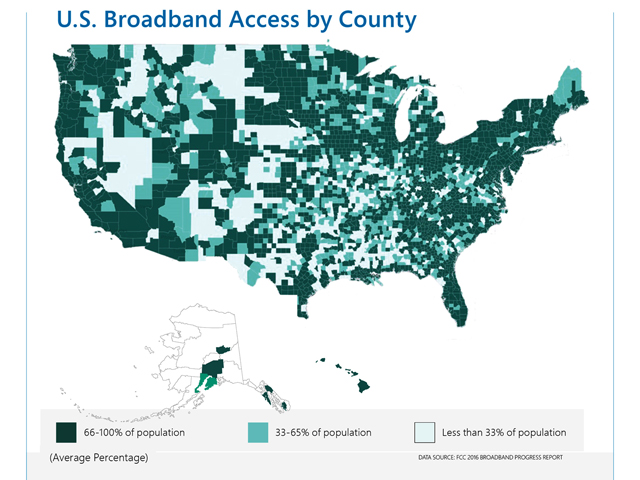