DES MOINES (DTN) -- The good news is more than three-quarters of the 113 countries in the 2016 Global Food Security Index have experienced food-security improvements over the past five years. How to sustain and improve that number was one of the discussion points Tuesday in conjunction with the Borlaug Dialogue and the World Food Prize, celebrating its 30th year. Agricultural and development leaders from around the world are meeting this week in Des Moines to discuss world hunger and agricultural development.

A key part to global food security is access to germplasm and improved seed varieties. Norman Borlaug, who instituted the World Food Prize, was an international wheat breeder who developed dwarf, rust-resistant wheat that brought about the Green Revolution and was credited with saving one billion people from starvation. Borlaug won the Nobel Peace Prize in 1970.

Seed breeding continues to be front and center in the quest to combat hunger in the world. The U.S. Senate, 10 days ago, ratified the International Treaty on Plant Genetic Resources for Food and Agriculture. The treaty is an important step in governing seed access but needs to go farther in balancing public and private interests, said Brad Kurtz, senior manager for Intellectual Property for Crop Genetics Research and Development for DuPont Pioneer. He will be in Brussels, Belgium, later this week to discuss ways to improve the treaty to attract funding to get improved seeds to smallholder farmers in undeveloped countries.

"If you don't protect a breeder's rights, there is no incentive to be innovative," said Peter Button, with the Union for the Protection of New Varieties of Plants, known by its French acronym UPOV. However, the protection doesn't have to be that limiting. UPOV is a 93-country organization that allows a protected variety of seed to be introduced into a country. But once introduced into a country, other local plant breeders can use that variety to commercialize subsequent varieties under conditions that comply with UPOV policies, without compensating the original breeders. The original breeder gets initial access to the market and will be compensated for the seed it sells, while other local seed companies can provide competition as they work to improve seed quality and variety.

"The impact of UPOV breeding in the European Union has been tremendous," said Button. Between 2000-2013, for every euro invested in plant breeding, it has added 40 euros in benefits. "Europe would have needed an extra 44.5 million acres in land to equal the same increase in production as a result of plant breeding in that period," Button noted.

"Why doesn't the government simply fund plant breeding?" asked Button. "Because publicly funded research is focused on publication, not necessarily dissemination. Private companies are better at coordinating plant breeding and testing it in a variety of farmers' fields and they have the distribution channels to get the high-quality seeds to farmers," Button explained. "The government can start a plant breeding program but then what has worked best around the world is for private companies to develop and distribute the seed," Button added.

"We need to develop a system to incentivize plant breeding while protecting the small farmer," explained Kurtz. "Canada is a good example. When Canada incentivized breeding through UPOV, more breeders entered the market. This has been good for Canadian farmers, as they now have more choices, including the ultra-short maturity corn Pioneer developed that's now being grown in Alberta."

Quality seed isn't the only innovation needed to combat hunger, said Jerry Flint, DuPont Pioneer's vice president for regulatory affairs. "We need innovation in financing, infrastructure, agronomics, technologies and access to technology." But those topics were left for discussion with others later this week, as the 2016 Borlaug Dialogue continues.

Elizabeth Williams can be reached at talk@dtn.com 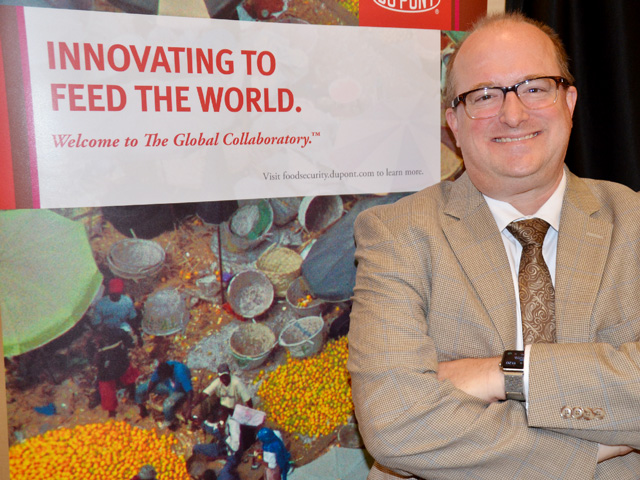