DUSSELDORF, Germany (DTN) -- Global press conferences are a quick reminder that agriculture is bigger than the back forty. This week two agri-chemical powerhouses, BASF and Bayer, separately collected journalists from around the globe to talk about the future of farming.

BASF kicked off the week in Ludwigshafen, Germany, but not before Bayer AG disclosed they would up their cash offer to purchase St. Louis-based Monsanto. While both BASF and Bayer conferences tried to focus on coming agro-chemical innovations and the current economic volatility in agriculture, topics concerning the ongoing consolidation of the seed and chemical industry kept bubbling to the surface.

While Bayer officials refused to comment on details around their attempts to tie-up with Monsanto, Markus Heldt, president of BASF's Crop Protection Division, was more outspoken on BASF's position. "Our portfolio, pipeline, ability to move fast and to understand farmers' needs give us a solid competitive position," Heldtsaid. "The agrochemical market is evolving and we are actively pursuing opportunities arising from ongoing merger efforts to increase our footprint and value offer." Heldt indicated BASF stands ready and is financially prepared to acquire any spinoffs that anti-trust regulators might force on merging companies.

Heldt said BASF's weakest spot in the portfolio is insecticides. "We are catching up. We have a couple of exciting new insecticides to be launched, but we see that segment as opportunity," he said.

He acknowledged that farmers are struggling with lower prices. However, he said the agricultural market remains highly attractive for BASF. "The task of feeding a growing, wealthier and more demanding population will not get easier -- the need for new technologies, like ours, will continue to be high," he stated.

BASF highlighted a new fungicide, Revysol, that is in the late stages of regulatory review. Although it is part of the azole class of chemicals, BASF scientists claimed its unique molecular structure gives an alternative mode of action to help with resistance management and provide both protective and curative properties to crops.

Heldt met with U.S. journalists following the conference. He commented at length on the current situations with off-target and off-label use of dicamba herbicides that occurred in the U.S. this summer. BASF is the world's largest producer of dicamba and has recently added production capacity in Beaumont, Texas.

BASF has a lower-volatility dicamba herbicide called Engenia undergoing regulatory reviews in the U.S. intended for use with the Xtend (dicamba) herbicide tolerant crops developed by Monsanto. Heldt said he remains hopeful the Environmental Protection Agency will approve that formulation in time for use in the 2017 season.

He added that stewardship remains vital to keep dicamba-based trait technologies safe and viable and that additional investment and innovation is needed to bring even safer dicamba products to the marketplace.

He said dicamba trait stewardship will take coordination as Monsanto ramps up seed sales that will drive use of BASF's herbicides.

"We will have to make sure that both companies are very much aligned -- to continue to innovate in that space and continue to look for drift reducing solutions including nozzles. Also new innovations will be needed to make sure this opportunity and the need of farmers is protected in the long run," Heldt said.

Dicamba pricing will be important to make sure the difference between older, higher volatility DGA salt, herbicides and new products, like Engenia, designed to be used on herbicide-tolerant crops, don't drive farmers to attempt to use the older products, he added.

Liam Condon, head of Bayer's Crop Science Division, spoke to journalists in Leverkusen, Germany, on September 7 about the cyclical nature of agriculture and how innovation continues to be the key to helping farmers weather financial storms.

DTN and other journalists were warned prior to the press event that there would be no discussion about the pending offer for Monsanto. Bayer's previous offers have been rejected as financially inadequate.

Condon apologized for his inability to discuss the purchase with U.S. journalists. "It's tricky [to talk] right now," Condon said. "We are hopeful that we can have a stronger discussion at some point."

He didn't see the EU's notification last month that it has opened an in-depth antitrust probe of the planned merger of Dow Chemical and DuPont as a sticking point to his company's plans. It's likely the Bayer/Monsanto tie up would bring similar scrutiny, but Condon told DTN that regulatory authorities in several countries are likely to look over the transactions.

"That is a standard procedure everyone goes through," he said. "You make your case and the regulatory or anti-trust authorities make their decisions."

Condon said the company has about 10% of its sales going into research and development. "Irrespective of the volatility of the agricultural cycle, we need to take a long-term approach to innovation because in our highly regulated industry it takes us on average about 10 years to develop new products," he said.

He reviewed the history of agriculture and talked about why most of society no longer has the worry of producing food and fiber. "The reason people can do other professions today is that farmers do such a damn good job," he said. Condon said that's a message the rest of the world needs to consider and understand. 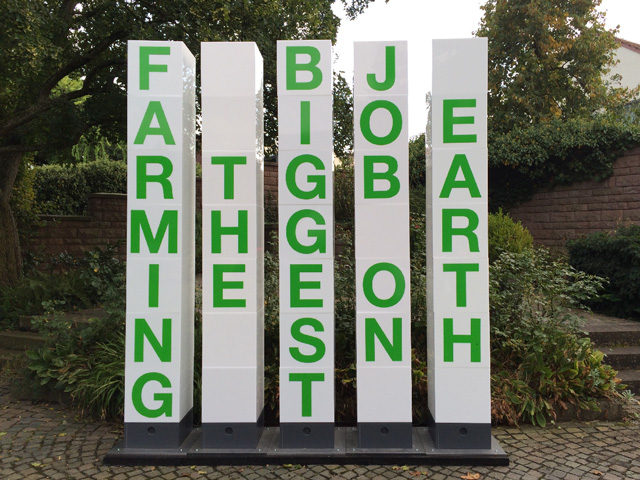