Everyone has their own idea of what expensive electricity is,” says California rancher Dave Roberti. Yet after paying $150,000 a year to run his eight deep-well pumps, enough was enough. Roberti, who operates a 6,000-acre ranch west of Reno, with 450 pair of beef cattle and 2,500 acres primarily in alfalfa production, decided it was time to investigate alternative energy sources.

“I considered wind power,” he says, “but everyone told me solar offered a better bang for the buck.” Roberti talked to his local rural electric cooperative, Plumas-Sierra, about options for tying a solar-powered system into the grid. “Our local electric company was great in working with us,” he remarks. “Most utility companies try to make it difficult for you to use alternative energy.”

power up. Roberti ultimately purchased a 500-kW photovoltaic (PV) system consisting of just under 2,500 solar panels installed on the ground on 3 acres of ranchland in 2011. The panels are on a single-axis pivot to track the sun from east to west during the day. The system produces more than 1.2 million kW of electricity for Roberti, which is just enough to run all of the ranch’s deep well pumps.

“The system is designed to meet my average use,” he explains. Should Roberti overproduce, he can get credit from the electric company for the excess power, but it’s only at the rate of 6 cents per kW. “Since it costs 12½ cents per kW out of pocket for electricity, it doesn’t make sense to overproduce,” Roberti says, cautioning farmers to work closely with the solar company they use to make sure their systems are correctly sized.

In Roberti’s case, his solar contractor analyzed five years of utility bills to determine the ranch’s average annual use and sized the PV system to meet that usage, not exceed it.

expensive option. Roberti says his solar panels produce enough power that he no longer has to pay for electricity for his pumps. “I’ve traded my electric bill for a mortgage payment,” he notes. “In 10 years, when the system is paid for, I’ll have free electricity.”

Even though the cost of PV systems has declined sharply in the last decade, it’s still not cheap to install solar. Roberti says the total cost of his system was $2.4 million, though he got $700,000 of that back through a federal tax credit and used a USDA Rural Energy for America Program grant to cover another $200,000 of the cost. “Getting the grant wasn’t easy,” he says. “I had to hire a grant writer, and there was a lot of paperwork. I just barely passed the requirements.”

That’s one reason Laura Wiseland, senior energy analyst with the Union of Concerned Scientists, says solar isn’t for everyone. She encourages producers to consider what tax incentives are available, what rebates they can obtain and how their electricity costs stack up against the cost of installing a PV system. “Space can also be a factor,” she explains. “Ideally, you could install solar panels on a barn or processing facility roof. You can also install panels on the ground if you can give up the acreage.”

Right now, California ranks highest for solar power production, mainly because electricity rates are so high. The state’s farmers who can take advantage of tax incentives and grants generally come out financially ahead by installing PV systems.

buy solar power. That was certainly the case for Russ Lester, co-owner of Dixon Ridge Farms, near Winters, Calif. A producer of organic walnuts, he took advantage of California’s Purchase Power Agreement. It was actually the first such agreement undertaken in the state. Essentially, solar companies install PV systems on a private landowners’ property with zero investment from the landowner in exchange for the landowner buying power from the solar company as opposed to the local electric company. Lester says he pays about 80% of the utility company retail price for electricity from the solar company to help operate his walnut-processing facility. He also takes advantage of a biogas-powered generator that uses waste walnut shells to produce electricity.

Lester says the solar panels produce about 17 kW of power on an annual basis, equivalent to $5,000 worth of electricity at his local electric company rates. The solar panels are located on the roof of the processing plant, so he’s not taking land out of production. And after a lot of lobbying, including getting help from a California senator who introduced new legislation to allow producers like Lester to tie solar and biomass operations into the grid, Lester combines solar and biomass to run the processing plant and eight agricultural wells on his farm.

no simple task. Lester will be the first to say none of it was easy, however. “Utilities have been resisting renewables,” he explains. “They will put every single roadblock in the way.” Today, the only payment Lester sends his electric company is for a small fee to connect

his alternative energy operations into the grid.

“Farmers really have a tremendous opportunity to use alternative energy sources,” he says, “because they have land, buildings and biomass.” 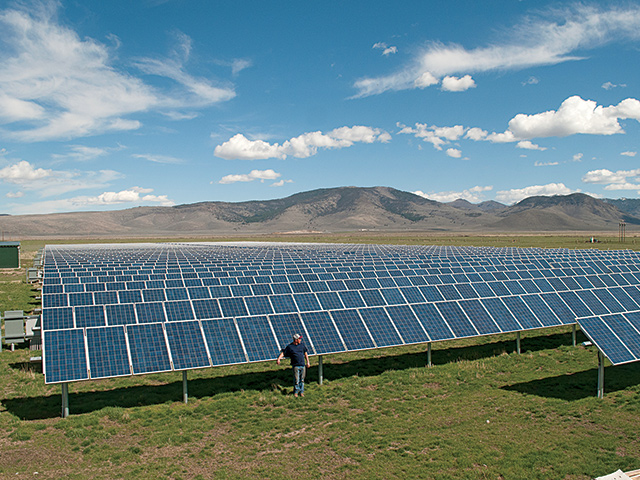