OMAHA (DTN) -- This year's bird flu contagion has not gone away, as Iowa officials on Monday reported a commercial egg-laying operation in north-central Iowa with 1.1 million layers had been hit by highly pathogenic avian influenza.

The 2022 highly pathogenic avian influenza (HPAI) outbreak that began last February is getting close to reaching the devastation of 2014-15 levels, which has been considered as the largest animal-disease outbreak in U.S. history.

Farms and backyard flocks were hit hard this past spring when migratory birds were heading north. Now farms are at risk from migratory birds moving south for the winter.

North Dakota State University Extension last week also cautioned producers or others who hunt waterfowl to take extra precautions if they are involved in poultry production in any way.

"Hunters of wild birds are more likely to have increased exposure to the virus, which may increase risk of infection," said Mary Keena, NDSU Extension livestock environmental management specialist. "Hunters should dress game birds in the field when possible and practice good biosecurity to prevent any potential disease spread."

The farm in Wright County, Iowa, is the largest reported case since an egg-laying farm in Weld County, Colorado, with 1.15 million birds was reported infected on Sept. 21. Since Sept. 1, USDA has reported outbreaks in 30 states -- mostly smaller backyard flocks, but several farms of significant scale have now been infected -- the largest of which was an egg-laying operation in Ohio involving 3.7 million birds.

USDA on Monday had not updated its totals to include the Iowa farm, but USDA reported 580 flocks have confirmed HPAI, including now 252 commercial farms going back to early February. Cases have been reported in 43 states total, affecting nearly 49 million birds.

Iowa has been especially hard hit due to a couple of large egg-laying operations that were confirmed positive last spring. But with the newest reported case, Iowa has had more than 14.4 million birds lost due to the outbreak.

"With HPAI continuing to be a significant threat across the country, this is a difficult and stressful time for poultry farmers and egg producers," said Iowa Secretary of Agriculture Mike Naig. "We have been preparing for the possibility of additional outbreaks and are working closely with USDA and producers to eradicate this disease from our state. With migration ongoing, we continue to emphasize the need for strict biosecurity on poultry farms and around backyard flocks to help prevent and limit the spread of this destructive virus."

The outbreaks this fall have helped drive a sharp spike in egg prices that moved from roughly $2.10 a dozen for large eggs in late August to as high as $4.20 a dozen nationally in October. Prices have come down but are still averaging about $3 a dozen compared to a three-year average of about $1.20 a dozen.

When cases of HPAI are found in domestic flocks, USDA and state officials quarantine the premises, and birds on the property are depopulated to prevent the spread of the disease. Other flocks within a 10-kilometer radius are also quarantined. USDA destroys the flocks so they do not enter the food system, and they are typically composted or incinerated.

The 2014-15 HPAI outbreak involved 43 million egg-layers or pullet chickens and approximately 7.4 million turkeys. Those birds were either infected and died from the disease or depopulated as part of the response. The economic impact from the 2014-15 outbreak was projected at about $3.3 billion. USDA spent a total of $850 million for the outbreak as well. 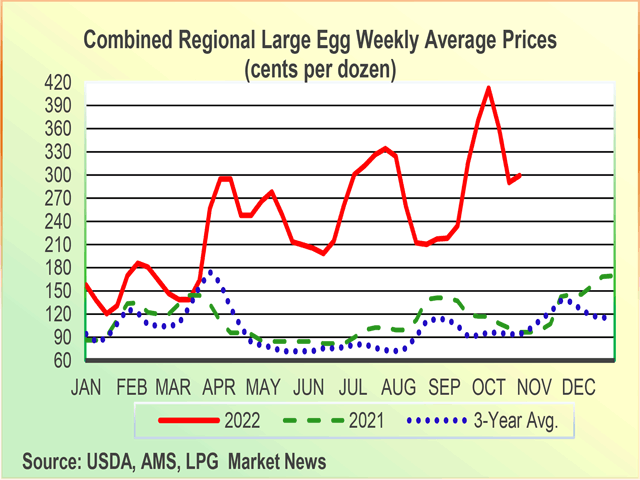