Net metering is a credit utility companies give customers who generate electricity from solar or wind energy for power they don't immediately use -- power the utility can sell to other customers.

"A farm solar system generates most of its power in the middle of the day, generally in a 4- to 6-hour window," said Jim Streator, president of Ag Technologies, Inc., a northern Indiana business specializing in designing and building solar-power systems for farms and businesses. "Unfortunately, most consumer's energy demands don't fall in this midday time window.

"Net metering provides a system to 'store' electric power by measuring outgoing power when the sun is shining and power used from the grid later in the day, or after nightfall," he said. "Ideally, the system allows a one-to-one offset of power generated to power consumed with the customer billed only for excess power they purchase from the utility."

Troy Furrer and his wife run Hilltop Swine, Inc., near Wolcott, Indiana, where Northern Indiana Public Service Co. (NIPSCO) is the power provider. In 2018, NIPSCO was seeking renewable energy for its generation portfolio and provided net metering as an incentive for customers investing in alternative energy production. Those incentives allowed the Furrers to take advantage of net metering as one of the first operations in the area to adopt solar power.

"Before we installed our solar system in 2018, the hog barn electrical bill was running $3,000 per month," Furrer explained. "Once our solar arrays came online, we've only paid the minimum meter fee of $33 per month."

Furrer said his 138-kW photo-voltaic system covers about three-quarters of an acre and operates the entire farm with separate meters for his home, the shop, grain bins, and the hog house.

"The project was calculated to pay for itself in seven to eight years," Furrer recalled, noting the payback is currently ahead of schedule.

Nearby, in Reynolds, Indiana, Bill Schroeder was spending an average of $4,000 a month with NIPSCO powering his 24-year-old hog house.

"When we built that facility, the electrical bill was about $1,500 a month. Because of what has happened to electrical rates, I was watching very closely as the Furrers went solar," Schroder said.

"When we ran the numbers on our place, with NIPSCO's net metering program, the pay-back figured 6.5 years. There's not much you can do in business in general that will pay for everything that quickly," he continued.

In 2019, Schroeder installed a 92.8-kW system that includes four 12X30-foot solar panels -- two for his home and two for his shop -- in a corner pasture. The panels are installed end-to-end and cover about 900 square feet. Additionally, to power his 750,000-bushel grain storage facility, he lined up six more panels in a grassy area between the bins and a county road in an array that stretches 180 feet.

"When we built the grain storage in 2007 it became the biggest power demand on our farm," Schroeder explained. "We had to size the system to cover the needs of the dryers and fans during our peak drying season.

"Because of that, we over-produce electricity during off-peak times and send that power on down the line and get credit for it. Then, when we're drying and conditioning grain we get that credit back on our utility bill," he added. "We never get a check, but essentially we've 'stored' that electricity on the books."

Today, he spends less than $2,000 a year out-of-pocket to power the grain bins, and not quite $1,500 a year for the farm shop. The hog house, which was not included in the original renewable energy contract with NIPSCO, remains an out-of-pocket electric bill for Schroeder.

The utility met its renewable energy quotas in 2020 and ended the 1:1 ratio net metering program for new customers, replacing it with a 50% credit instead of the full 100% credit that Furrer and Schroeder are enjoying on their pre-2020 contracts.

Schroeder said the current 50% credits are not sufficient to offset the costs of installing solar equipment to power his hog operation.

"On our house, however, we've never had an out-of-pocket electric bill since day one," he said. "Now, our kids have grown and moved away and we're over-producing power on that meter, so we purchased an electric car for my wife's daily inter-office business travel. It takes six hours to charge on a 220 VAC 50-amp receptacle and has a 250- to 300-mile range, so that has allowed us to park the SUV and save it for use on longer trips."

Tom McKinney runs a corn and soybean operation near Tipton, Indiana, in an area served by Duke Energy.

"Eight years ago, we were experiencing some good commodity prices and I was interested in investing in things to control my costs," McKinney explained. "My friend Jim Streator (Ag Technologies, Inc.) suggested I consider solar power, and after we looked at the numbers with the net metering program Duke Energy offered at the time I was convinced." (Duke ended further use of 1:1 net metering in accordance with Indiana state law in 2020.)

Using a USDA grant to defray part of the cost, McKinney installed an 82.7 kW system of 12 solar panels on 1.5 acres of his non-tillable land. Four panels feed his hog facilities and his home, while the other eight provide power for fans and drying equipment used for his 500,000-bushel grain storage.

"It's been a good return on investment over the years," McKinney said. "I've had essentially no electric bill on the big dryer and fans on my grain bins, and only a moderate bill for the shop and house.

"The meters measure generation and consumption depending on our energy needs," he continued. "We don't sell energy to Duke to supply this end of their power leg in the area, we just get credit for it at the meter, and it carries over until when we have demand. Then, the meter runs the other direction to use the power credit we've accrued."

He added the only time all of the solar energy captured is used is during the fall to dry grain. In the summer and winter, McKinney said the farm doesn't use much electricity. During those times, his solar panels are powering Duke's electrical loop.

McKinney said with the USDA grant, and his cash outlay for the system, he figures a 15% return on investment. He is enjoying a 30-year contract with Duke for no rate increases on his out-of-pocket electric bills.

The three producers interviewed by DTN say their solar systems have required virtually no maintenance, other than the minor labor requirement of adjusting the panels every three months to keep them oriented to the most efficient sun angles.

"The only time I visit my electrical site is to show people what it is, or to change the pitch of the solar arrays," McKinney explained. "That chore takes two people only an hour or two throughout the year." Schroeder and Furrer say they spend less time than that keeping their arrays adjusted.

"My wife and I adjusted our arrays for the fall equinox and it took 18 minutes by my stopwatch," Schroeder said.

Streator said rural landowners interested in solar power need to begin by consulting their electrical power provider to determine what renewable energy programs might be available.

While utilities are sometimes required to fill certain renewable energy quotas, 1:1 net metering is not always available. Also, there are several variations on net metering that include different prices for power produced and power consumed and whether excess energy produced is paid for in electrical power credits or some monetary form.

"Determining these things is critical to making financial decisions on investing in solar power," Streator said.

For more information on incentives in any given location, www.dsireusa.org provides an updated state-by-state discussion. 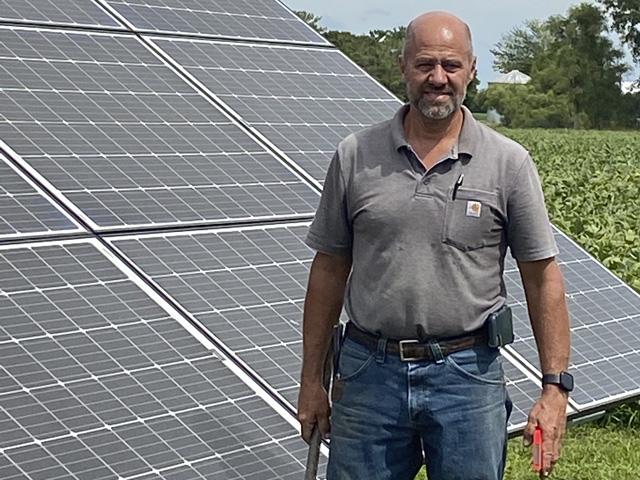