RIPLEY, Tennessee (DTN) –- Remember how much fun it used to be playing in a sandbox as a kid? There is nothing fun about the sandbars littering the lower Mississippi River as water levels continue to fall with no rain in sight.

Low water levels have caused at least eight barge groundings this week, portions of the Mississippi River to be temporarily closed backing up shipping traffic, barges being loaded at far less than capacity and temporary shutdowns at grain terminals. Corn and soybean basis levels in many areas have dramatically widened as a result, hurting farm revenue potential.

Thomas Russell, Russell Marine Group, sent an update to DTN on the afternoon of Oct. 7 regarding the closure of Mile 484. He said dredging operations were completed the morning of Oct. 7, along with sounding and surveys. He added the Mississippi River will open for traffic at Mile 484 at 2 p.m. on Oct. 7. He said there are 74 northbound and 111 southbound tows affected. One-way traffic starting with northbound tows will run until Saturday at 8 a.m. Southbound tows will start after that and run until all southbound boats are clear.

Per the closure at Mile 681, Russell said, "Closure grounding occurred earlier this week. There are 11 northbound and 11 southbound tows. The river at Mile 681 will start moving test tows this afternoon (Oct. 7). Northbound will move and clear first then southbound will start to move. At this time, there are no other closures on the lower Mississippi."

"Due to low water levels on the lower Mississippi River (LMR), we have seen an increase in commercial vessel groundings," said Capt. Eric Carrero, director of Western Rivers and Waterways at the Eighth Coast Guard District. "In response, the Coast Guard established a Marine Transportation System Recovery Unit with our federal, state, local, and maritime industry partners to facilitate safe navigation and the continued flow of commerce along the affected waterways."

The majority of water flow on the LMR is fed by the Ohio River, but dry weather in the Ohio River Valley during September has caused water levels to drastically fall over the past four weeks. DTN Ag Meteorologist John Baranick said that Hurricane Ian spent most of its rainfall along and east of the Appalachians, having little to no significant impact on the Ohio River.

"The amount of rain just was not enough over enough of an area to have a significant impact on river levels," he said. "The Ohio River at Portsmouth, Ohio, has already fallen down lower to where it was before the rains came in from Ian. Similarly, scattered showers that moved across the Northern and Central Plains over the last week have had little to no improvement in the Missouri River at Sioux City, Iowa, or near St. Louis. As the two main rivers flow into the Mississippi River, neither have enough to cause significant increases to the water levels below Cairo, Illinois."

Baranick added, "Unfortunately, widespread moderate to heavy rainfall is not forecast between the Rockies and Appalachians anytime soon. A cold front will move through next week and there is potential for widespread scattered showers. But the front will be moving too quickly to produce enough rain to raise levels with any significance."

The weather pattern at least for the next few weeks continues to favor dry conditions, Baranick continued. A shift may come at the end of October, but he said it may not be enough to bring a long-standing period of relief to the river basins.

There is concern that the critically low water levels in the LMR could eventually impact the New Orleans area and eventually Gulf loadings. Coast Guard Lt. Commander Jim Fothergill with Sector New Orleans said, "Currently, we're not in a situation where we're in what we call low water; our low water trigger is 2.5 feet."

Low Mississippi River water levels are costing Carmack Family Farms money. Not only is the West Tennessee farm earning less for grain sold at harvest due to disrupted barge operations, but the family recently decided to spend $93,000 to build a new 48,000-bushel bin to store more soybeans that would normally be sold out of the field.

Franklin Carmack, who farms with sons Gunnar and Heston near Ripley, Tennessee, said basis levels have widened as river levels dropped. Barges can't be filled at capacity so less grain is heading to the Gulf of Mexico and to overseas customers. Elevators, especially on the Mississippi River, are forced to hold on to grain longer resulting in lower cash bids.

In early September, Carmack said basis levels -- the difference between the cash bid and the nearby futures price – were plus 40 cents per bushel for September soybeans and 25 to 30 cents per bushel for September corn at area grain buyers such as the Cargill grain terminal on the Mississippi River near Halls, Tennessee. Carmack said soybean and corn basis levels were a negative $1.25 per bushel or more during the first week of October.

"We normally see a weaker basis at harvest, but maybe only a 20-cent drop. Nothing as dramatic as we're seeing this year," Carmack said. "It's a real big concern."

Carmack Family Farms planted 180 acres of corn, 2,200 acres of soybeans and 1,400 acres of cotton this year. Ninety percent of the family's corn and soybeans are sold to exporters, and a good chunk is usually taken directly from the field to river markets.

The recent $1.50 per bushel or more swing in revenue potential for corn and soybeans will hurt financially, Carmack said. It prompted him to sign a contract on Oct. 5 to build a bin to store more soybeans with hopes of better prices in the future. Construction is expected to start on Monday. Added storage will also keep soybean harvest going as area elevators and river terminals temporarily shut down due to storage issues, he said.

"It will help keep the combine running," Carmack continued. "We've been talking about adding more storage for years. With the river situation, we made that decision to build."

Grain prices and storage aren't the only worries for farmers pertaining to the Mississippi River. Fertilizer and building materials are also shipped on the river, which could increase those prices as well.

The USACE Northwest Division reported in a press release on Sept. 7 that at the end of November, "Per the Sept. 1 System storage, winter releases from Gavins Point Dam will be at the minimum rate of 12,000 cfs for the second year in a row."

The cut in flows for the winter will drop Mississippi River levels further by Dec. 1 unless it rains. The Missouri River normally contributes up to 45% of the Mississippi River's flow, and more during droughts per the Waterways Journal.

The upper Mississippi River (UMR) will soon close for the winter, with the final departure date for tows pushing barges southbound currently set for Nov. 20. While the water in most parts of the UMR flows unimpeded during the winter, the water slows down and freezes at the widest spot in the river at Lake Pepin, which creates about a 20-mile sheet of ice. That means the UMR from St. Paul, Minnesota, to Pepin will be of little help to the LMR water levels until spring. Lake Pepin is located above Lock and Dam 4 near Alma, Wisconsin, and Kellogg, Minnesota. 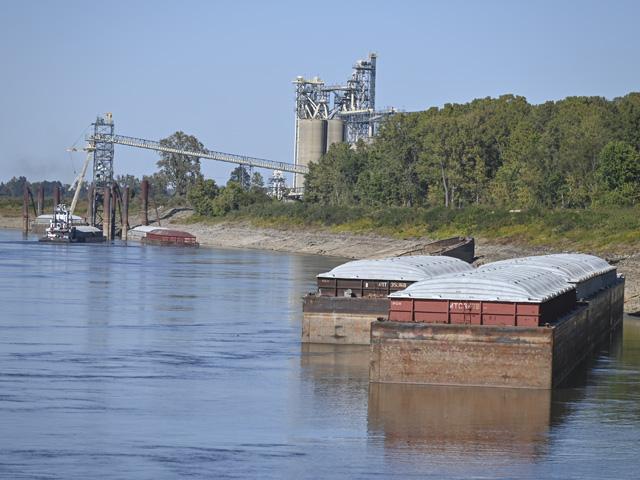