The agency revised its export forecast upward for fiscal year 2022 by $5 billion from its May projection, largely due to increases in livestock, poultry and dairy exports.

"This decrease is primarily driven by lower exports of cotton, beef and sorghum that are partially offset by higher exports of soybeans and horticultural products," USDA's Economic Research Service stated in its quarterly Outlook for U.S. Agricultural Trade. (You can find it here: https://www.ers.usda.gov/….)

Imports of ag products are also expected to increase in both years, with the value of imports exceeding exports by $1 billion in 2023. In fiscal year 2023, USDA sees imports growing by $5 billion to $197 billion on higher imports of grains and feed products, horticultural goods and sugar and tropical products.

Imports in 2022 are expected to jump 18%, the largest one-year percentage increase since 2011.

"The historically large increase from FY 2021 to FY 2022 is a product of the unwavering upward trend of import volumes in the face of increasing unit values for nearly every agricultural import product group," the report stated.

A breakout of feed grain, oilseed, livestock and cotton exports are below.

"Even with expectations of larger world market supplies as a result of the Ukraine grain corridor, prices are expected to remain historically high and global demand is forecast to remain strong," the report states. "If South America's production and exports are realized as currently forecast for next year's crop, competition with U.S. corn will be strong again.

USDA increased its forecast for 2022 feed grain exports to $47.8 billion, with corn and feed and fodder exports more than offsetting lower wheat volumes.

-- Corn export projections increase for 2022 to $19.2 billion as higher prices more than offset lower volume, resulting from increased South American competition in the final quarter of the year. Estimates for 2023 are $100 million lower due to a smaller volume of exports.

-- Sorghum's export value is expected to increase for 2022 before declining in 2023. At $2.7 billion, the 2022 projections are $100 million higher than in May as higher prices offset lower volumes. But in 2023, exportable supplies are expected to be short due to drought, and USDA's forecast falls to $2 billion.

-- Wheat exports for 2022 are forecast at $8.1 billion, $300 million less than the previous quarter's estimates, as more tons are sent abroad at a lower price. "Global wheat prices have fallen over the last quarter, reflecting the ongoing winter wheat harvests as the new-crop wheat supply situation becomes more favorable," the report states. With more supplies available next year, the total value of exports is expected to fall to $7.8 billion.

-- Soybean export value climbed to $33 billion, up $700 million from USDA's previous forecast for 2022, due to higher prices and volumes. "High global prices for all major oilseeds and reduced competition from South America have supported soybean export values despite slowing demand from China," the report said.

Next year, exports will likely set a record -- $35.2 billion -- despite a drop in export volume due to a combination of higher prices, strong domestic crush and increased competition from Brazil.

USDA's forecast calls for higher export values in 2022 that will fall back in 2023.

For the current year, exports of livestock, poultry and dairy products are forecast at $42.6 billion, up $2.2 billion from USDA's May projection. Volumes are generally expected to fall in 2023, contributing to a $1.5 billion decline in exports to $41.1 billion.

-- Beef exports are expected to increase $700 million in value to $10.9 billion on higher prices and volumes, but with drought squeezing producers, USDA sees exports dropping to $9.8 billion in 2023 "as higher prices fail to offset lower volumes driven by tight U.S. supplies."

-- Pork prices are expected to lift the value of exports in fiscal year 2022 by $100 million to $6.3 billion. In 2023, higher volumes are expected to drive a continued increase in exports as prices drop. Exports are forecast at $6.5 billion in 2023.

The value of cotton exports is expected to tie the $8.8 billion record in fiscal year 2022. That's $200 million lower than USDA's previous forecast as prices fall but volumes increase slightly.

Cotton exports are forecast to plunge in 2023 with production forecast to fall 20% as drought grips more than half of the fiber's growing area. Even though prices are expected to stay about the same, the lower volume of exports is behind USDA's decision to cut the export forecast by $1.8 billion to $7 billion.

Canada is expected to buy one-third of total exports. 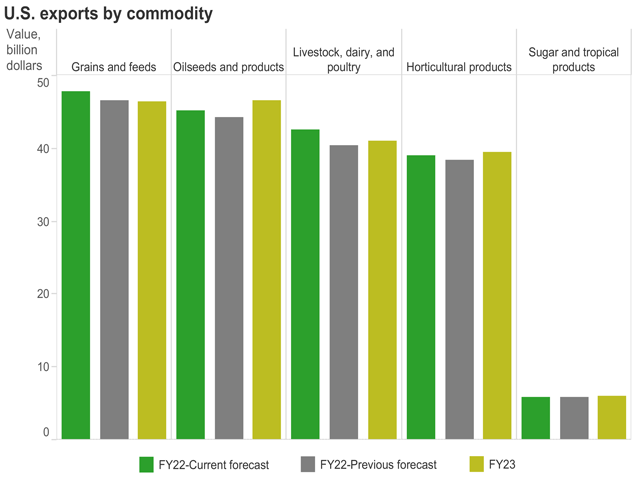