Potential competition between soybean and corn acres and future revenue concerns led Tharaldson Ethanol, the nation's seventh-largest ethanol plant, to oppose the construction of North Dakota Soybean Processors (NCSP). The attempt to thwart the neighboring soybean crush plant from being built failed, but it created a division in the community and angered many farmers who supported having another market for their crops that would likely increase prices.

"Some farmers threatened to boycott sending corn to Tharaldson," said Casselton farmer Joe Morken. He sells corn to Tharaldson, and he wasn't happy that the company rooted in agriculture opposed another grain processor. "But it's over now, and I'm sure corn and soybeans will go to the highest bid."

This is the fourth and final story in a four-part series -- called Cash in on Soy Crush -- which explores why renewable diesel demand exploded to trigger a rapid expansion of soybean crush. In this story, DTN examines how some communities and farmers are welcoming new and expanding facilities, but in one North Dakota area this also led to controversy.

The unexpected controversy in Casselton is a consequence of the growth in soy crush capacity to provide feedstocks to the growing renewable diesel industry, Morken said.

Tharaldson Ethanol, which annually processes 54 million bushels (mb) of corn to make more than 150 million gallons of ethanol, was reportedly worried about future corn supplies and profit potential, among other concerns.

A Tharaldson executive sent a letter, obtained by DTN/Progressive Farmer, on April 25 to the City of Casselton to protest a proposed zoning change that would allow NDSP, a collaboration between Minnesota Soybean Processors and CGB Enterprises, to be built on the west edge of town. The Casselton City Council approved the change a week later, paving the way for construction of the $400 million facility to begin this year.

DTN/Progressive farmer contacted Ryan Thorpe, Tharaldson chief operating officer, who penned the letter, to find out why one value-added grain processor would try to stop another, since both work with local farmers and have close ties to renewable fuels. Thorpe declined to comment.

Morken said Tharaldson was concerned that farmers may grow more soybeans and less corn and store more soybeans through the year, which could reduce available corn supplies. In turn, Morken said, plant management was worried that could drive up the price of corn.

"The letter pitted ag against ag; every soybean farmer was royally mad," said Morken. "I told Thorpe that if we get 20 cents per bushel or more in better soybean basis levels, that will be nice, but it won't change our rotation. It was a money play for Tharaldson."

Besides the potential for higher soybean bids, farmers are looking forward to other perks that new crush facilities provide. For many, that includes more buyers closer to home and fewer unloading delays at crushers.

NDSP would only be minutes from Morken's farm. Rick Juchems grows soybeans and corn near Plainfield, Iowa, and his nearest soybean processing plant is currently more than an hour away. He often has to wait in line for several hours to unload.

Shell Rock Soy Processing (SRSP), which is being built in Shell Rock, Iowa, is only about 15 minutes away from Juchems' farm. The plant, with a crushing capacity of 38.5 million bushels of soybeans per year, is expected to be operational at year's end.

The plant will feature state-of-the-art unloading facilities with a capacity of receiving 30,000 bushels per hour. SRSP CEO Corey Jorgenson expects to get farmers in and out in 30 to 40 minutes during peak harvest time and 15 minutes otherwise.

"I think the new plant will be fantastic," Juchems told DTN after the project was announced. "I only have a 600-bushel semi, so sitting in line for hours isn't a thrill. Being closer to a plant will save time and money."

As more crush plants are built with similar unloading capabilities that will provide farmers more options for delivery, Jorgenson said that should speed up harvest. Delivery pressure will be relieved at all facilities near new crush plants.

He understands competition for bushels may be fierce in the future, which will only benefit farmers.

"To find close to 40 million bushels of soybeans, we will have to reach and show people that we want to give them a great experience," Jorgenson said.

Meanwhile, a new facility was announced this week for southeast Missouri.

On May. 17, Cargill announced it plans to build a new 62-mb-capacity soybean processing facility in Pemiscot County, Missouri. Cargill said in a news release it aims to have the facility operational by 2026.

Missouri Soybeans CEO and Executive Director Gary Wheeler also welcomed the new facility. "Missouri Soybeans is very pleased with the new build of a soybean crush facility in Pemiscot County and the direct impact it will bring to our farmers in southeast Missouri.

"In an effort to increase opportunities for our growers, Missouri Soybeans has been working collaboratively with several partners for more than two years to achieve this lofty goal and create a needed market for their soybeans. Born and raised in the Bootheel, I know first-hand this is a great opportunity for our soybean farmers and local community," Wheeler stated.

This is the fourth and final story in DTN's Cash in on Soy Crush series.

To watch a video of an Iowa farmer talking about how the soybean expansion affects his farm and small biodiesel refineries, go to: https://www.dtnpf.com/….

To hear a Field Posts podcast about the subject, go to https://www.dtnpf.com/… and scroll down to "E99: Soybeans are Crushing It, Literally." 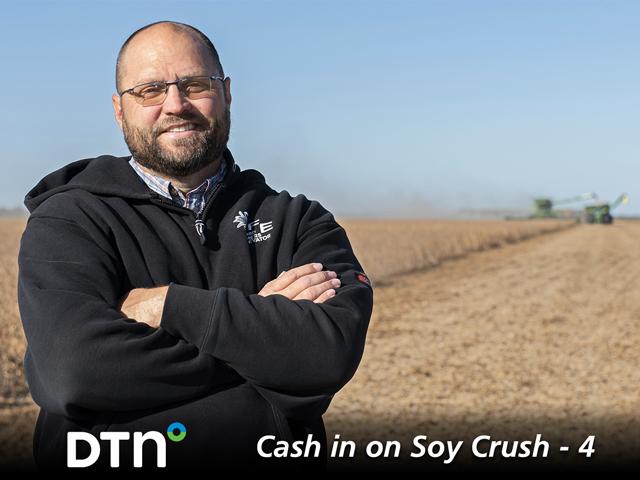