INDIANOLA, Iowa (DTN) -- A farmland auction in eastern Iowa last month came down to three bidders: a local farmer, a developer and an out-of-town investor who owned other land in the area.

The individual investor won the final bid, agreeing to pay $26,250 per acre for 46 acres adjacent to Fairfax, Iowa, a town of 2,680 people about 15 minutes from Cedar Rapids. While that price might be rationalized with future development, Doug Hensley, president of Hertz Real Estate, said even land without development potential is selling off the charts.

"The current competition for buying farmland is unbelievable. In an auction we had in Champaign County, Illinois, in a very rural area not influenced by development, land that would have brought $12,000 to $13,000 per acre a year ago sold for $19,300 per acre," Hensley told DTN.

In a statewide land survey conducted by the Iowa chapter of the Realtors Land Institute, farmland values on March 1, 2022, were 32.9% higher compared to the previous year. Across the state in the nine crop reporting districts, land values ranged from an annual increase of just over 30% in the northwest and southeast to a 39.1% jump in southwest Iowa. (You can read the report here: https://rliiowachapter.com/….)

In northwest Missouri, a tillable tract sold for $14,600 per acre in an area that saw farmland selling for just more than $9,000 per acre a year ago, said Randy Dickhut, senior vice president of real estate operations for Farmers National Company, based in Omaha, Nebraska. Even poorer-quality land is getting a bump up.

"We had a CRP tract in western Iowa sell for $10,000 per acre," he said, adding that there have been strong land values from Texas through Kansas and Colorado. "Even in North Dakota, which had a drought last year, land values were steady but then took off with higher grain prices."

Both farmers and investors are being aggressive bidders in public auctions.

"Anything that can be bullish on farmland is happening now," explained Steve Bruere, president of People's Company, in Clive, Iowa. Even though prices are high, those looking to buy would rather potentially overpay for farmland than overpay for other investments.

"Farmland has several advantages," Bruere told DTN. "It has less management issues than other real estate. Traditionally, it's a good inflation hedge. It may have valuable externalities such as carbon credits and solar or wind energy and some land has non-financial benefits such as hunting and hiking."

Bruere said it feels similar to the 1970s. "We're certainly paying prices beyond the economic value," he said.

ARE THEY SUSTAINABLE IN LONG TERM?

Gary Schnitkey, soybean industry chair of agricultural strategy professor at the University of Illinois, said whether these land values are sustainable over the long term is a good question.

"But in the next year or so, land values should remain strong," he said. Prices are much higher than average for the season ahead, with December 2023 corn futures trading around $6.50 and November 2023 soybeans about $14.50. It also helps that most land buyers right now either make a substantial down payment or have a large land base to secure their purchase.

"We're not yet at the point of 'irrational exuberance' yet," Schnitkey said. "I don't think we've hit the high. There's a lot of momentum out there."

Ag land experts begin to worry when everybody is bullish.

"Anytime everybody gets so confident in grain prices, that scares me," Bruere said. "It's hard to remember how low commodity prices can go. Just two years ago, in February 2020, corn prices were $3.30 per bushel and soybeans were $8.17 per bushel."

Hensley pointed to the old adage: The cure for high prices is high prices. "Corn at $7-$8 a bushel is not good for anybody, and $17 soybeans will destroy demand."

A rise in interest rates will be a headwind to land values. The Federal Reserve is planning on six rate increases this year and has said some of those raises could be more than 0.25%. Most expect rates to go up 2% to 3% increase within the next year.

"Unless the Fed gets much more aggressive, I don't see interest rates depressing land values in the next year or so," Schnitkey said.

Dickhut said that kind of move would push borrowing rates up, and 7% to 8% would get the market's attention and put the brakes on rising prices.

The other big unknown is world events: Russia, Ukraine, China, Taiwan. "Generally, farmland has always been a piece of stability in an unstable environment," Hensley said. That volatility has attracted buyers to the current land market.

"But it worries me that people are making long-term decisions on pretty short-term information right now," Bruere cautioned.

Schnitkey said that for now, agricultural profits are good and alternative investments do not look much better. "Farmland prices will continue their climb." 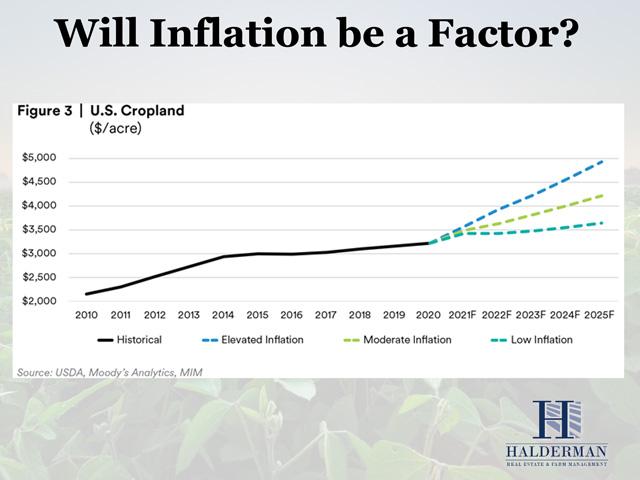