NEW ORLEANS (DTN) -- Commodity group and agricultural equipment leaders on Friday discussed what ag sustainability means to them, along with a variety of issues that affect their respective organizations and members at Commodity Classic in New Orleans.

Moderator Mark Mayfield asked the association leaders what ag sustainability means to them, noting it's an important topic for the thousands of farmers in attendance and the customers of farmers, both foreign and domestic.

Here's what the ag leaders had to say. (Editor's Note: Answers were edited for clarity and brevity.)

Stucke: The continued evolution of technology in farm equipment and the data collected will help show that America's farmers are sustainable and can help reduce carbon in the atmosphere, Stucke said. "There's so much misconceptions out there about agriculture ... (which) is the foundation of our country. We need the data to get that (sustainability) story out. We need to work together. And, together, we have that strong voice to say that agriculture is good for everyone. And that's going to be our sustainability agenda."

Doyle: The ASA focuses on voluntary, incentive-based conservation programs and sustainability, which means improving economic and soil health, and improving the environment, Doyle said. "Everyone in the room here is here for a reason. Many of you are multi-generational operations. That healthy, profitable viability of your operation is vital to our industry. If we are not profitable, we go (away), and someone will take our place. So, we have to be ready for what comes at us every day. That definitely falls in line with (adopting) conservation practices."

Carson: American farmers are sustainable but much of the non-farming public doesn't realize it, Carson said. That's proven by keeping a growing world population fed while preserving the productivity of farms for future generations. "We are asking producers to feed more people across the world than ever before. We are giving the U.S. consumer the safest and most abundant supply of food in the world. We, as U.S. farmers, have to band together right now and tell the world that we are sustainable."

Milligan: Sustainability means ensuring the future productivity of land to feed a growing world, Milligan said. "We've got to remember that we need to produce food in this country for ourselves and be able to feed everyone in the world that needs it. We need food security. My son's a farmer, and he's farming ground that was farmed by his great, great grandfather. We want to maintain that productivity for future generations."

"We feel we are sustainable," Edgington said. "We need to get better at messaging how good we really are about being sustainable. It's a question about how we message that to the 99% (of the public that doesn't farm) who go to a store every day to buy low-cost, high-quality food by the way of sustainable production."

Mayfield asked each panelist questions on topics of interest to their respective associations. Here's what they had to say:

On the impact of precision agriculture and the importance of infrastructure improvements in rural America, Stucke said continued improvement is vital. Precision ag, he noted, helps farmers increase yields, reduces inputs and helps the environment.

"Equipment is what puts the seed in the ground and harvests (crops)," Stucke said. "Equipment manufacturers are investing a lot of our time in technology and precision ... (that) allows farmers to better stewards of the land."

Stucke said AEM has been lobbying Congress for years to improve America's roads and bridges, waterways and rural connectivity.

Doyle answered questions about the renewal of the Farm Bill and trade relations to China.

ASA surveyed members nationwide about what they would like in the 2023 Farm Bill, Doyle said. The importance of crop insurance tops the lists.

"Through the China trade war, PLC (price loss coverage) payments were never triggered," Doyle said. "So, reference price is a priority. We'd like to see that adjusted upward because we have inflation increases the costs, among other things."

As far as soybean trade with China, Doyle said the country is and will remain the largest buyer worldwide. "China buys one out of every three rows of soybeans in the U.S. They are a strong commercial buyer," Doyle said. "Can we replace China if they back off? No. But we have some safety net in place, and the United States Soybean Export Council has representatives all over the world promoting use."

Carson was asked about how climate change will affect sorghum production and demand for the crop in the future.

Carson said sorghum is a water-sipping crop and is ideal to be raised in locations such as his farm in the Texas panhandle, where precipitation can be extremely variable. He went 17 months with only a little more than 5 inches of rain followed by 16 inches in 27 days.

"With the climate swings and the weather challenges that we have had, I've gravitated toward something that makes me more climate-friendly that will make my farm more sustainable and efficient in the future," Carson said, referring to growing more sorghum. Farmers from Texas to the Dakotas, in more arid regions, are doing the same, he added.

Carson continued that China is the top importer of U.S. sorghum, but the industry is working in Vietnam, India and other countries to boost demand. The industry is also working to increase domestic use, particularly in biofuels.

Mayfield inquired about what the wheat growers are doing to advocate for crop insurance and agricultural research, which can go hand-in-hand.

"The national wheat growers have always been advocates for crop insurance," Milligan said. "Agriculture is a risky business. We certainly need that protection, which is provided (due to) great cooperation between the government and the private sector.

Milligan said the wheat association is advocating for improvements to government drought monitoring to help with crop insurance claims. The association is also lobbying for more federal funding to bolster disease- and drought-resistant wheat varieties.

Questions about working to expand biofuel use and the importance of farmers working together for common goals were directed to Edgington of the NCGA.

The Next Generation Fuels Act, which increases gasoline octane to a minimum standard through low-carbon renewable fuels was introduced in Congress in 2021. Edgington said the group is lobbying hard for its passage.

"We're making a lot of progress, a lot of strides," he said. "We've got over 20 co-sponsors on the bill. It's our attempt to get to the next generation of fuel (on the market)."

"We have a lot of shared goals," Edgington continued. "We may have different tactics, but we have so much in common. So, one of the thoughts is spending even time as associations, working together on common goals."

Commodity Classic is the largest farmer-led agricultural and education show in the United States. The show ends Saturday. 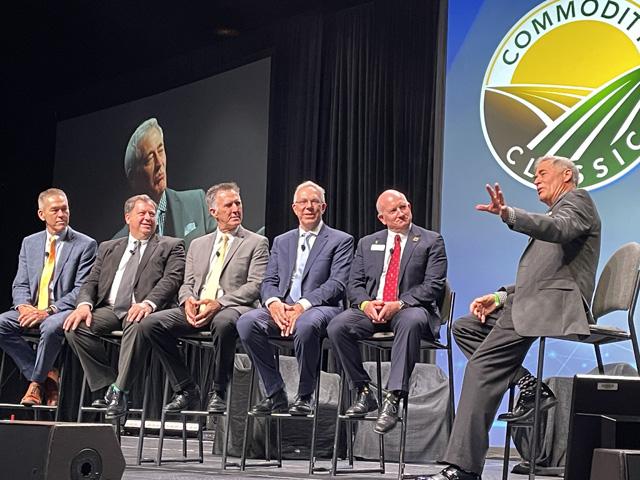