The CEO of 21st Century Equipment, a 16-dealership John Deere network that straddles the Nebraska, Wyoming and Colorado state borders, had hoped the end of the federal government's extra unemployment stipend, an added $300, would bring back prospective employees that had become desperately difficult to find.

In Nebraska, the stipend ended in late May.

In early October, Palm was still sweating the same problems.

"We were hoping things would loosen up a bit," he said. "Nebraska was one of the first states to terminate those extended benefits and we saw absolutely no movement in terms of available employees. It wasn't even a blip on the radar."

Palm wasn't alone in hoping the nationwide labor shortage was a symptom of unemployment benefits. But now, a month after the national extended stipend ended and five months after some states, like Nebraska, began to end that stipend, there's no sign of want-to-be employees swarming out of the woodwork looking for jobs.

It's affecting ag equipment manufacturers today and some are wondering how it's going to change the future of the industry.

At the corporate level for John Deere, the last 18 months have been an exercise in adaptation.

"Sometimes you have to break paradigms," said Deanna Kovar, vice president of production for John Deere.

Deere has tried to shore up its labor shortages with creative solutions and flexibility. It has more than 500 openings listed on its website -- everything from welders to software engineers.

What's new is how many of those job listings come with the all-caps letters "REMOTE."

"It's a constant conversation about what it's going to take with our workforce to fill the roles," Kovar said. "Whether we're talking about the people who are working on the family farms as hired hands, talking about the dealer organization or employees at John Deere, we have to all recognize that we have to have competitive wages and benefits and long-term employment strategies, and we're definitely very focused on that."

Remote work signifies one way Deere has shifted and that it may never quite shift back. Offices around the world cleared out in the spring of 2020 when COVID first appeared, and many workplaces remain remote.

Deere has begun to embrace remote work in ways it never had before. It's doing so by allowing more work-from-home opportunities than it did pre-pandemic, and by planning to open new offices around the country, albeit in yet-to-be-announced locales.

"The last 18 months have really made us realize we can break a paradigm and still run a company without everyone coming into the office every day," Kovar said. "There are benefits we've had to give up as well, but I think 10 years from now this time period will have taught us it's OK to break those paradigms, to selectively forget the way we used to do it and try new approaches."

When it does have the employees for the task, Deere has been proactive about maintaining its supply lines.

"We have sent John Deere employees out of state, out of town to go work at suppliers to keep them running," Kovar said.

There are openings up and down the line at 21st Century Equipment, from unskilled jobs in the wash bays to 32 different open positions for service technicians, an average of two per location. Those are jobs advertising wages up to $33 an hour, nearly $70,000 a year, before incentives and bonuses.

The company is doing a lot to try to fill the roles, too. It's started offering hiring bonuses for newcomers, between $2,500 and $5,000 for many jobs and $10,000 for technicians. There are also referral bonuses for customers or current staff if they can suggest an employee, and it's reevaluating and adding to its health insurance offerings.

"It's an extremely large challenge, especially the technical trades, such as service technicians that requires substantial training and experience to become a contributing employee, but really at all levels, there's a serious shortage," Palm said. "We have moved up our wages to be as competitive as possible. We've offered higher bonuses to try to attract employees, referral bonuses to customers and to our employees to seek out a fellow employee. All of those efforts have had minimal effect on improving our vacancies."

Manufacturers of all sorts are looking high and low.

"We're hoping to have a job fair in our booth at some farm shows," said Jon Rall, senior public relations coordinator for Kawasaki.

Whereas the booths usually do everything possible to showcase the company's newest offerings, this year the company was also offering a potential career in addition to a new UTV at the Husker Harvest Days show in Grand Island, Nebraska.

"Some of those ranchers, they may enjoy coming to working for Kawasaki, or some of the younger guys," Rall said. "Some of the jobs are hard to fill. They are getting some, and the people at the plant are working so hard. We're doing the best we can, kind of like everyone right now."

Labor's certainly not the only headache plaguing Palm and others in the ag equipment industry. In fact, he said it's not even at the top of the list.

That spot is reserved for shortages of new equipment.

Most new equipment is nearly unavailable now. At 21st Century, planters are sold out for 2022 and Palm expects combines will be soon. Deere's 8R and 9R series tractors are sold out for the first two quarters of 2022 as well, which is as far into the future as an order can even be placed now.

"Equipment availably is the largest single issue," Palm said. "We're dealing with the labor issue, but it's not impacting our bottom line like the equipment availability."

It could all help usher in a new era.

"I think it's going to drive the shift toward autonomy, autonomous tractors," Palm said. "Our customers are having these same issues finding help, so any product Deere can come out with that reduces the amount of labor or the skill level that's required, that's certainly going to speed up the adoption rate compared to if we had full employment. I see autonomous tractors, vehicles, technologies like artificial intelligence, robotics, things that reduce labor or reduce the skill level of labor, those are going to be the big winners." 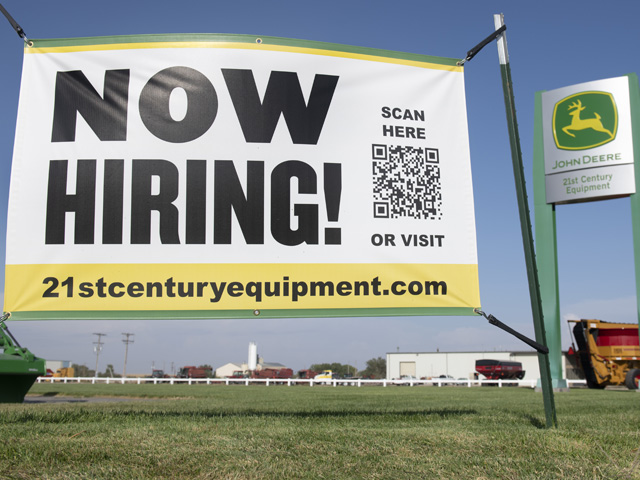