Editor's Note: For the past two weeks, and continuing this week, DTN/Progressive Farmer is posting a special series called Cybersecurity and Ag to examine the threat cyberattackers pose to agriculture and explore what farmers, ranchers and agribusinesses can do to protect themselves against these high-tech criminals. This is the sixth story in the series.

BIRMINGHAM, Ala. (DTN) -- In 2018, 11 team members from the U.S. government and private sector outlined threats as they perceived them, in a public-private analytic exchange program: "Threats to Precision Agriculture."

THREATS TO CONFIDENTIALITY. Data privacy in the areas of crop yields, land prices and even animal herd health were spotted as concerns. The report noted that loss or misuse of data could have financial and emotional impacts at the farm level, and that there could also be a loss of reputation and business for both equipment and software manufacturers in the event of a breach. Areas the group noted were especially treacherous included the use of decision support systems that could by design be malicious and steal data; intentional publishing of confidential information such as market data from within an industry to cause chaos; and even foreign access to unmanned aerial systems. The group identified at least one threat where a company was approached with offers to sell data under the table to commodity brokers or hedge funds.

THREATS TO INTEGRITY. Here the group considered how "smart farming" could be manipulated. They pointed to intentional falsification of data to disrupt crop or livestock sectors, even to the point of planting false data that mimicked actual reports prior to or during a livestock disease outbreak. The same could apply to crops. Smart sensors could be used to disrupt automation systems and HVACs, potentially damaging stored crops or resulting in adverse health impacts to animals.

THREATS TO AVAILABILITY. As farmers and ranchers rely on their equipment, the timing of its availability to them could lead to damage or a failure to meet optimal planting or harvest windows. Malicious actors, the report noted, could possibly identify a vulnerable type of equipment and disrupt thousands of machines at once. There is a related concern that Global Positioning System signal access could be denied, and that rural cellular and broadband networks continue to be a weak point for agricultural security.

Next in the series: Commodity markets work to stay a step ahead of disruptors. 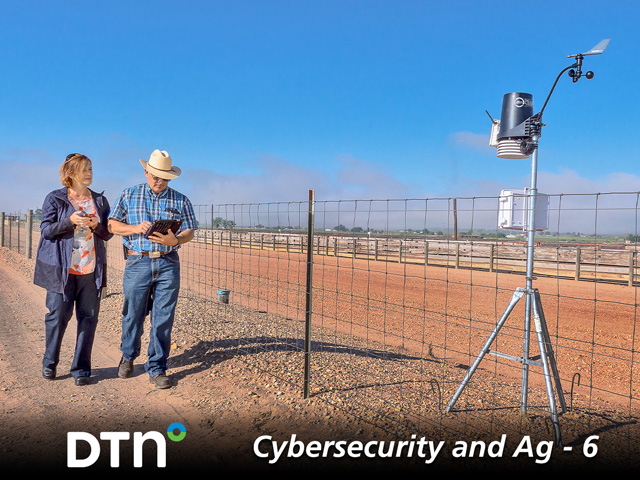