Inside a portion of a large industrial warehouse in Gas City, Indiana, farmer-owned Heartland Harvest Processing is at the forefront of the effort to move beyond the initial boom -- and near bust -- of the hemp-growing CBD (cannabidiol) oil market.

The company is the creation of Kline Family Farms -- Jim Kline and his son, Adam, an attorney by trade -- in an attempt to diversify their row-crop business. The 2018 Farm Bill essentially legalized the growing of hemp, the cousin to marijuana that doesn't create a "high." The CBD oil derived from hemp has been touted for its multiple health benefits, and national interest in the product and acres devoted to hemp has exploded (see "Demand Now and in the Future," below).

In early 2019, a liter of CBD oil (slightly more than a quart) was worth about $7,000, and a grower who could produce 25 liters on 1 acre could gross $175,000. Numbers like that drew a lot of attention -- so much so that the supply ballooned, and the price nosedived.

By the end of 2019, a liter of CBD oil was worth as little as $300 per liter, a cataclysmic 95% drop in price. The $175,000 gross per acre plunged to $7,500. The market had become flooded with too much product, and growers and processors stockpiled the oil waiting for better prices.

One problem with that plan is that a little CBD oil goes a long way. Less than 1 acre's worth of production, 16.5 liters, is enough CBD oil to produce 8,300 oil retail bottles if each contains 1,200 milligrams of CBD.

Not only did the Klines suffer when the market tanked, they learned (and are still learning) a hard lesson about how difficult it is to grow hemp for oil and expect to handle the crop mechanically. Their acres devoted to hemp the past three years tell the story -- 60 acres in 2019, 43 acres in 2020 and 2.5 acres this year.

"We tried to mass-produce hemp like a row-crop farmer," says Jim Kline, "believing we could mechanically find a way to efficiently harvest it and handle a large volume. Guess what? It did not work."

He now better understands why tobacco farmers in the South still hang that crop by hand in ventilated barns. "If you want a good quality product you have to hang dry it -- and that takes a lot of space," Jim Kline says. With all that in mind, 2 1/2 acres now seems like plenty.

That's the Catch-22 when it comes to hemp, says western North Carolina's Brian Lyda, who has years of experience growing medical marijuana and now hemp. If you want to grow more than a few acres, there is a desire to find a mechanical way to harvest, store and dry the crop, because otherwise, the labor needed to do it all by hand "will kill you," he says.

However, "hemp is a tough plant to handle mechanically," says Lyda, whose family members have been growing apples and produce in this mountainous region near Hendersonville for seven generations. Mechanical harvesting greatly adds to the amount of biomass -- stalks and stems -- that will have to be processed to derive the oil. This adds greatly to the time and cost to move from plant to oil.

Mechanical harvesting is also hard on the plant's open flowers, where the trichomes, which produce most of the oil, are located. The trichomes are the fine crystalline hairs on mature flowers and leaves. Densely packed and ripe, trichomes are laden with oil and have a "frosty" appearance.

Lyda helped establish the hemp-growing business, Healthy Harvesting LLC, with its line of CBD products under the HempOfy label. Under his direction, their hemp is largely handled by hand. In 2020, they grew 6 acres, enough to occupy nine workers for weeks on end weeding, pruning, fertilizing and harvesting.

Harvest on their 6 acres begins in late August and lasts for nearly three months. Workers cut off the plants' branches by hand, leaving a solitary stalk in the ground. They then hand-strip the individual leaves and flowers, which are placed on racks inside one of six climate-controlled trailers at 60 degrees F with dehumidifiers running.

After three days drying, the plant material is ready for processing, which Healthy Harvesting does itself. Even so, as summer 2021 approached, they were still working through plant material from 2020. Bottlenecks often occur at processing. Lyda's operation can only produce about 4 gallons of oil per day, derived from about 300 pounds of biomass.

Like Lyda, Adam Kline understood that in order to make the venture worthwhile, Indiana's Heartland Harvest would have to process the hemp themselves to capture existing margins.

"Pricing is the way it is for two main reasons," Adam Kline says. "First, a little oil goes a long way; and second, regulations as to what hemp can be used in have been slow to develop." The U.S. Food and Drug Administration (FDA) still hasn't issued regulations regarding various uses and the sale of CBD oil products.

The lack of regulatory rules and oversight has prevented, for instance, more widespread introduction of CBD oil in foods and beverages. Heartland Harvest is working on formulations of water-soluble CBD that might be added to myriad beverages such as coffee, water or beer.

"There is almost no competition in the drink space," Adam Kline says. "Water-soluble CBD is rapid-release, and the targeted effect happens quicker." According to a 2019 Gallup poll, one in seven Americans uses CBD as an over-the-counter treatment for pain, anxiety or sleep problems. There are positive anecdotes about CBD by the thousands but few, if any, definitive scientific studies yet to back up the claims.

"The oils have gotten a bit commoditized," Adam Kline says. "This isn't necessarily a volume game for us. We want to cut out some of the middlemen to get to a more attractive price point."

Either way, there is more CBD oil than buyers right now, Adam Kline and Lyda agree. "It is definitely a buyers' market," Adam Kline says.

North Carolina's Lyda sees their business as continuing to produce oil tinctures along with smokable hemp flowers from hemp plants raised indoors. "CBD oil is selling (prices ranged from $700 to $1,200 per liter at the time this was written) if you have a good product," he says. "Just not as fast as the industry would like."

Not surprisingly, growers such as Lyda and Kline -- in a young, semiunregulated market -- want value-added products.

"It's as if a tomato grower produces the tomato, processes it himself into ketchup then markets the ketchup to a store to get shelf space," Lyda says. "That's the way you have to do it with hemp right now."

Demand Now and in the Future

In 2018, there were 3,500 licenses issued nationally to grow hemp on about 80,000 acres. Even though the crop wasn't made fully legal until the following year, numerous states had had pilot programs. The next year, with legalization, there were 19,000 licensed growers planting hemp on 320,00 acres across the country.

"The market was hot," says Eric Steenstra, a longtime veteran of the industry and the president of Vote Hemp, a national political advocacy group. "The vast majority of farmers were growing for biomass at $3.50 to $4 per pound."

Instead of following up on USDA's full legalization with regulations on the crop's labeling, marketing and handling, the Food and Drug Administration (FDA) threw up red flags or simply delayed offering guidance on cannabidiol (CBD) products. Their waffling deterred big-box stores and grocery chains from stocking those products.

The combination of thousands of new growers in the market with fewer-than-expected outlets for products created a "perfect storm" to cool the market, Steenstra explains. Prices for biomass dropped to 50 to 75 cents per pound. Adding to the dismay was that many growers decided to grow hemp on speculation, with no buyer contracted.

There are 14,000 licensed growers in 2021, but Steenstra says there are still processors and growers sitting on oil -- and biomass from last year and even from 2019.

CBD oil, however, is not the only product to come from hemp. After all, growing hemp for fiber was once common in the U.S., particularly for use in ropes during WWII. In addition, the hemp seed itself has use as a grain like most any other. There are already growers in the U.S. producing hemp seed for $1.15 per pound with an average yield of 700 to 800 pounds per acre, Steenstra says.

BMW, as well as other companies, already use hemp fiber in dashboards and other composites in vehicles. 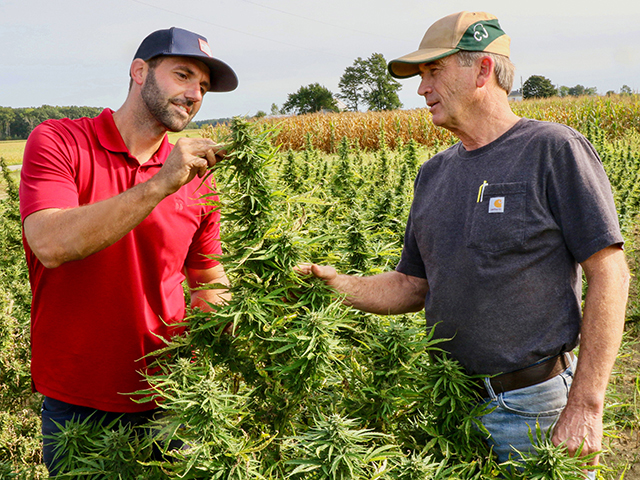