LINCOLN, Neb. (DTN) -- Battle lines have been drawn in many small Iowa towns where local convenience store chains sell E15 to help local farmers but stand firm against a proposal to mandate the sale of the fuel along with 11% biodiesel across the state.

Companies such as Casey's General Stores Inc. contend such a mandate would run some small-town retailers out of business.

Iowa convenience stores support local small communities with jobs and a market for fuel produced yet stand opposed to the legislation. In the political world, some critics of the convenience stores' position paint it as anti-ethanol yet are willing to take advantage of millions of dollars in ethanol-industry aid to expand infrastructure.

Doug Beech, legal counsel and director of government relations for Casey's, said opposing such a mandate comes down to cost.

Casey's stores in Iowa would need to invest between $81 million and $188 million to equip 538 stations not set up for E15 and biodiesel.

"So, in our older stores, we have hundreds of stores where we would have to break concrete, that means tear up the parking lot, put in a new tank and new lines and new pumps. Those costs run from about $150,000 to $350,000 a site," Beech told DTN.

"And, again, in the rural communities, I don't get any return on that. This bill shifts all that cost to the gas stations."

The clock is running out on the current legislative session, and the bill may not be voted on this session. Iowa lawmakers are working past their scheduled April 20 adjournment and expect to continue into next week.

Monte Shaw, executive director of the Iowa Renewable Fuels Association, told DTN it will be difficult to pass the legislation this session.

"While we are still working to try to get a vote on the bill in the House, as time goes by, the chances are reduced," he said. "We do believe it would pass both the (Iowa) House and the Senate if brought to the floors for a vote."

Casey's, in particular, would need to make upgrades at nearly all of its stations in Iowa, Beech said.

"What we have told the legislature and what is working right now is the incentives," he said. "Give us incentives on price. To do this will grow the market, and E15 is growing. Our current plan is working. So the plan that we offered, which would increase the demand for E15, is give us a little more tax incentives, make the product more competitive to offset some of these new costs."

The current Iowa House bill would require retailers in the state to offer E15 by 2026 and 11% diesel by 2022. The plan also provides tax incentives for the retailers to meet compliance goals.

Geoff Cooper, president and CEO of the Renewable Fuels Association, said he's hopeful the Iowa bill can make it across the finish line.

"The ethanol industry has invested heavily in efforts to build out the infrastructure for higher ethanol blends, and we have tirelessly advocated for the creation of state and federal infrastructure programs -- like HBIIP (Higher Blends Infrastructure Incentive Program, a USDA program) -- that provide financial assistance to fuel blenders and retailers," he said.

"So, it has been more than a little frustrating to see so much misinformation being spread about ethanol infrastructure compatibility, infrastructure costs, and the impact of higher blends on consumer pocketbooks."

Ethanol industry groups have made the case that existing E10 infrastructure, including storage tanks, would be suitable to store E15.

Mark Cobb, owner and president of Cobb Oil company and a member of the Iowa Biodiesel Board, said he opposes the legislation because of added costs to retailers and consumers.

"The continued growth of Iowa biofuels remains a shared goal, but a government fuel mandate is not a route that will help either consumers or retailers," he said in a statement to DTN.

"The only route this bill creates is one that will lead to higher costs at the pump and fewer routes for fueling stations. Higher-blended fuels are already growing in Iowa, and if we truly want to increase consumer adoption, we need to double down on what works --- providing key incentives in the marketplace."

FUELIowa told DTN the legislation is not needed because E15 sales have been growing in Iowa. For example, sales grew by 24% last year despite an overall decrease in fuel consumption.

"The coalition believes this is proof that incentives are already working in Iowa and that implementing a mandate and restrictive measures on retailers is not the way to go," the group said in a statement.

FUELIowa has raised a number of concerns about the legislation (https://www.legis.iowa.gov/…).

If enacted, the group said, the bill would label regular 87 octane gasoline a restricted-use fuel and limit its usage to engines in 1985 or older motor vehicles, motorcycles, all-terrain vehicles, snow mobiles and a few selected exemptions.

If retailers are unable to invest in infrastructure by 2026, they would be required to apply for an exemption and would be restricted to selling premium 91 grade gasoline. The group said the bill eliminates the sale of both 87-clear octane (without ethanol) and 87 octane E10 blends.

A review of tax and USDA records shows three gasoline retailers opposing the measure have received millions of dollars from the ethanol industry and USDA to expand E15 availability.

Opposition to the measure has come from gasoline retailers that already sell E15. In particular, Casey's, Kum & Go and Kwik Trip were all recipients of various grants to help offset the infrastructure costs through Prime the Pump and USDA.

Representatives from Kwik Trip and Kum & Go did not respond to DTN's requests for comment.

All three are founding members of the Fuel Choice Coalition in Iowa, a group of retailers and others who support the expansion of higher biofuel blends.

"ATTENTION: Iowa lawmakers are taking up a law that will result in higher gas prices," the label reads. "Call your representative and say NO FUEL MANDATE."

Despite their opposition, a search of tax records from the Prime the Pump campaign -- an ethanol-industry fund designed to expand ethanol infrastructure -- Casey's, Kwik Star and Kum & Go, received about $12.1 million in grants from 2015 to 2018 (https://www.causeiq.com/…).

Casey's was awarded nearly $5 million through USDA to replace 346 fuel dispensers at 70 fuel stations in 13 states. The project was expected to increase the amount of ethanol sold at Casey's stations by about 19.6 million gallons per year.

Kum & Go received about $1.6 million in USDA funds to install 128 biofuels dispensers at 17 stations in six states. The project was expected to expand annual ethanol sales by the company by about 23.3 million gallons. 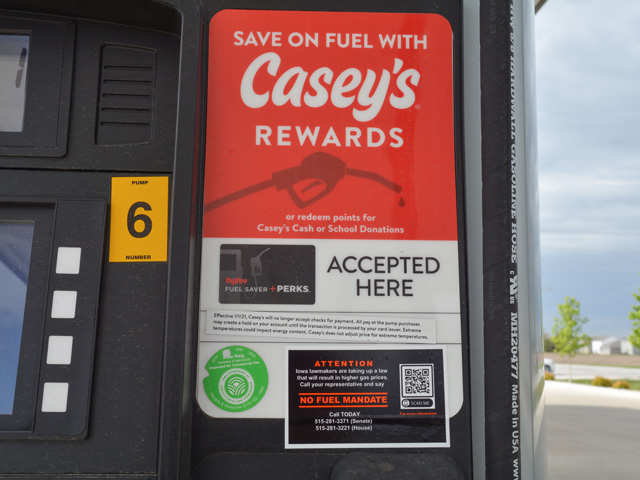