HAVERHILL, Iowa (DTN) -- Some people chase storms. The Stalzer family are starting to wonder if they attract them.

The Haverhill, Iowa, farmers spent $150,000 to rebuild grain bins after a 2011 derecho. If that wasn't bad enough, in 2020, another derecho ripped through their area -- once again damaging bins and buildings on their farm.

-- Adequate insurance for all property and structures is a must.

Each of these lessons helped the central Iowa farmers mitigate current and future financial losses and reconstruction delays after the storms. They hope other farmers heed these lessons as well. Not doing so "can be costly," said Dick Stalzer.

Dick farms 5,000 acres of corn and soybeans with brothers, Bob and Dale, and their sons, Matt, Brian, Ross and Brett.

A derecho is a violent storm that resembles an inland hurricane. The first to strike the Stalzer farm was on July 11, 2011. It destroyed four uninsured grain bins and ripped the roofs off four others. The National Weather Service said the storm, with winds hitting 105 mph, traveled from Nebraska to West Virginia, but unleased its fury over central Iowa.

"Dad said there's no need to insure a bin; they won't burn down," quipped Dick Stalzer. "He never thought about them blowing away. We put insurance on all our bins after that and upped insurance on all buildings."

The family replaced and repaired the eight grain bins -- 400,000 bushels of storage -- in 2011 by themselves. All the contractors they attempted to reach were booked. Matt Stalzer said they waited several days after the storm to schedule repairs, which was too late.

While not ideal, he said, it did save the farm money in labor costs. However, the downside was other farm work took a backseat to get grain facilities operational by harvest.

The second derecho to pummel the Stalzer farm occurred Aug. 10, 2020. Winds topping 140 mph cut a path of destruction from Nebraska to Ohio, according to the DTN weather team. Iowa was hit the hardest, especially the central and east-central part of the state.

After making sure all family members were safe, Matt Stalzer conducted a quick assessment. Four grain bins were damaged, including a 75,000-bushel bin that was unsalvageable. The storm also ripped the roof off an old dairy barn and blew shingles off a couple of the family's homes, which sustained water damage.

Matt Stalzer knew what had to be done first based on previous derecho experience.

"After the storm, I called our bin contractor (Dankin-Ag Equipment in Boone, Iowa) to put us on the list for a new bin," he said. "I'm glad I did. If you tried to order a bin now, it may be October before you get one (and more expensive)."

Bin builders and manufacturers told DTN it is unlikely a bin could be ordered this spring and erected in time for the 2021 harvest due to high demand. Plus, steel prices have doubled since last fall. Find out why here: www.dtnpf.com/agriculture/web/ag/news/business-inputs/article/2021/04/09/grain-bin-building-companies-hasten.

"Most manufacturers, including us, have (delivery) lead times for new product well out into the coming harvest," said Roger Price, director of grain sales in North America for GSI.

Dean Ford, a sales representative for C&S Construction Grain Bin Services of Higginsville, Missouri, said it costs about 20% more this spring to buy and build a grain bin than it did six months ago. The company builds and sells grain bins.

Insurance money, minus deductibles, paid for the Stalzers' reconstruction expenses after the latest derecho. The family decided to fix the damaged, but salvageable bins themselves.

Dankin-Ag hired C&S Construction to replace the Stalzers' bin that was destroyed. The family removed the damaged bin so the new 86,000-bushel replacement could be built on the existing concrete pad. It took less than a week to build in mid-March.

To prepare for the possibility of future derechos -- a lesson learned from past experience -- the Stalzers decided to make bins more wind-tolerant. Their new bin has a stronger roof and four wind rings, which are strong steel tubes that encircle the corrugated steel structure to add strength. The Stalzers also hired Dakin-Ag to install multiple wind rings where needed on all their existing bins. The farm has 20 bins on three sites for a total storage capacity of 700,000 bushels.

"There will be another derecho," said Brian Stalzer. "I wouldn't be surprised if another one doesn't hit us in five years with the changing weather patterns."

"We are seeing the north-to-south air mass boundary set up more frequently across the Midwest instead of farther south," Anderson said. "That boundary relocation, along with the prospect for large weather system features to stall for weeks at a time, is more favorable for establishing the environment that can spawn these damaging storms."

According to the National Oceanic and Atmospheric Administration (NOAA), most of the Corn Belt currently has the potential to experience one derecho every two years or one derecho every year, depending on location. Read about derecho facts here: www.spc.noaa.gov/misc/AbtDerechos/derechofacts.htm#forecasting.

NOAA contends frequency of these costly and dangerous storms may increase as the earth warms and the jet steam shifts north. Derechos tend to form on the equator side of the jet stream along the northern fringes of warm high-pressure systems. It is reasonable to conclude that the corridors of maximum derecho frequency would shift north (from the Delta region to the Midwest) with global warming, according to NOAA.

The agency estimated the Aug. 10, 2020, derecho inflicted $11 billion in damage to structures, vehicles, implements and crops, making it one of the costliest natural disasters that year.

Dealing with the destructive force and expense of two derechos is enough for the Stalzers, but they're ready if nature kicks up again. 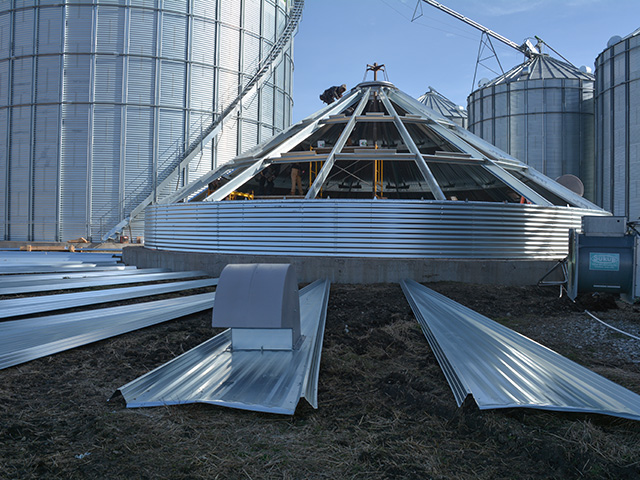