ANKENY, Iowa (DTN) -- Contractors believe they are on pace to repair and replace by fall most Midwest grain storage facilities and buildings that were pummeled by a derecho last year.

The fierce storm, which resembles an inland hurricane, cut a destructive path from Nebraska to Ohio on Aug. 10, 2020. Iowa was the hardest hit. Winds topping 140 mph caused an estimated $11 billion in damage to grain bins, buildings, crops and more, according to the National Oceanic and Atmospheric Administration.

The primary focus of contactors last summer and fall was to get as many derecho-damaged commercial and farm grain storage facilities and buildings operational as possible for the 2020 harvest. Builders are feverishly working this spring to finish construction and repair projects by the time combines roll in 2021.

If farmers and elevators were proactive ordering bins, grain-handling equipment, building materials and scheduling work crews after the storm, bin manufacturers and builders say the goal of a complete rebuild, or very close to it, is attainable.

"If farmers (and elevators) aren't ready for harvest, it's because they waited too long to order bins and schedule repairs," said Stephanie Voxland, president of Global Bin Builders (GBB) based in Sioux Falls, South Dakota.

Voxland said multiple farmers and grain bin dealers called her to book GBB's services during and shortly after the storm laid waste to gain storage facilities across the Corn Belt. In Iowa alone, an estimated 120 million bushels of on- and off-farm grain storage was damaged or destroyed by the derecho, according to the Iowa Department of Agriculture and Land Stewardship. Read about initial grain facility damage here: www.dtnpf.com/agriculture/web/ag/news/article/2020/08/18/mangled-grain-storage-adds-harvest.

"We've been very busy through the winter and all spring, which isn't normal," Voxland said. "Usually, it's slower in the spring and busy in the fall."

This includes rebuilding bins at Mid-Iowa Cooperative, based in Beaman, Iowa, which took a beating from the derecho. Fifteen bins were damaged or destroyed at multiple locations totaling about 9 million bushels of storage. Almost all have been replaced or repaired. The only exception is the co-op's Gladbrook location, which won't be rebuilt. Mid-States Millwrights and Builders of Nevada, Iowa, was the general contractor for Mid-Iowa's rebuilding efforts and GBB was a subcontractor.

"We're fortunate to have moved pretty fast rebuilding our biggest facilities that got destroyed," said Mike Kinley, Mid-Iowa CEO. "We rebuilt and increased capacity (eight bins and a ground pile totaling 6.1 million bushels) at our Midway location in 75 days (after the storm)."

GBB has replaced several grain bin roofs damaged by the derecho, including one at Mid-Iowa's Midway location. The company devised a way to remove and install a new roof with the bin still standing, as long as the bin is full or near full and keeps its round shape.

"We're able to save (customers) a lot of money because normally you would jack the bin down, fix the roof and jack it back up again," Voxland said.

C&S Construction Grain Bin Services of Higginsville, Missouri, typically erects 350 to 400 commercial and on-farm grain bins a year. This year, the company expects to build about 200 more bins than normal thanks to the derecho. C&S also sells grain bins.

Usually, C&S's five construction crews (eight to nine people each) would be working in multiple Southern states during the winter and early spring and move north as the weather warms up. But all the crews started working on Iowa farms in the beginning of March due to the big workload. Crews work for three weeks straight at job sites, typically eight to 10 hours a day every day, and then return home for a week off.

Dean Ford, a sales representative for C&S Construction, said projects are progressing well, though early cold spells have been a challenge.

"At times, we needed to put heaters by hydraulic (bin) jacks to keep the oil in them flowing," Ford said. "We're doing our best to meet everyone's needs. Hopefully, by early June we'll have our Iowa projects wrapped up."

If farmers and elevators didn't order replacement bins and materials well in advance, builders and manufacturers said it's unlikely a bin could be ordered this spring and erected in time for the 2021 harvest due to high demand.

"The derecho has faded now as far as the industry focus," Price said, noting most bins needed for reconstruction have already been manufactured. "Now, demand is more driven by grain markets and income potential.

"Most manufacturers, including us, have delivery lead times for new product well out into the coming harvest," he continued.

Bin prices have dramatically increased due to demand and steel prices doubling since late last fall, according to Price. He said COVID-19, trade barriers including tariffs and overall steel demand, especially from other agricultural industries and the auto industry, have all played a role in steel price hikes.

Ford said it costs about 20% more to buy and build a grain bin this spring than it did six months ago.

Kinley said he knows Mid-Iowa's insurance company is happy the cooperative acted quickly after the storm to order replacement bins given the recent price surge.

Efforts are ongoing to repair and rebuild weather-beaten farm shops and machine sheds.

Lisa Bocklage, marketing manager for Morton Buildings based in Morton, Illinois, said more than 800 building owners in Iowa, Illinois and other states called the company to assess damage and repair their Morton and other brand farm structures after the storm.

Morton's crisis repair team provided estimates, action plans and worked with insurance adjusters to get work started as soon as possible after the derecho.

"This was a widespread, unprecedented storm that caused a lot of destruction," Bocklage said. "We did prioritize damage to get repairs and rebuilds done, especially those not functional prior to winter.

"Barring unforeseen circumstances, which can certainly happen, we're on track to have all structural repairs and rebuilds done by this summer," she continued. "Cosmetic repairs are expected to be completed by the end of the year."

Morton provides a five-year wind load warranty with no velocity limit on any new building. All wind-related damage in that timeframe is fixed free of charge. 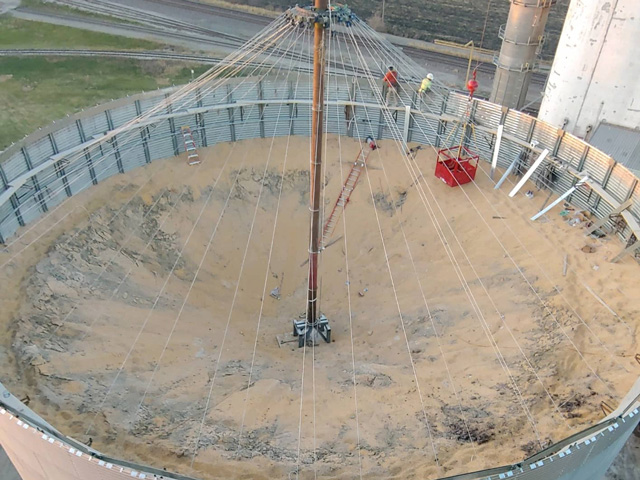